The consequences of hate. 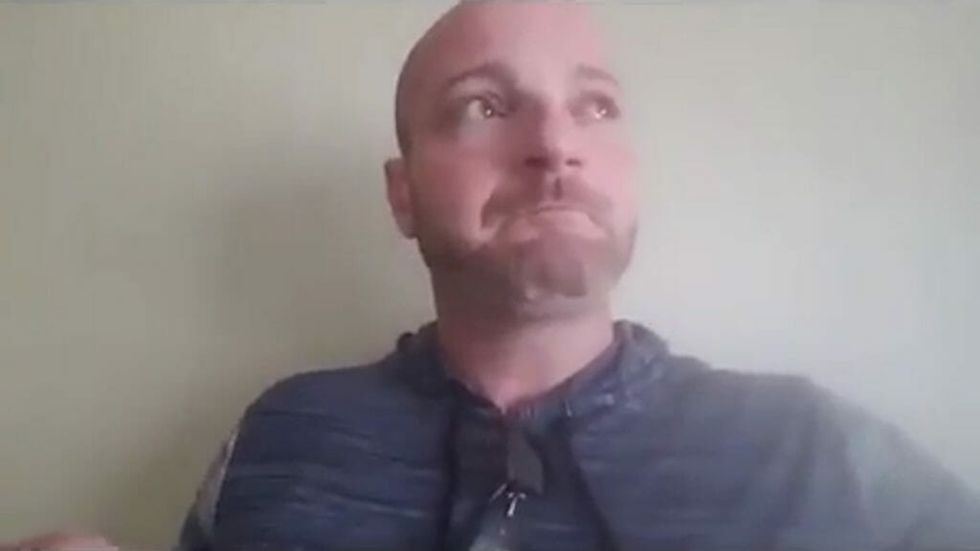 Christopher Cantwell became the star of a VICE News documentary watched by tens of millions about the "Unite the Right" rally in Charlottesville, Virginia. In it, he called for an "ethno-state," screamed, "Jews will not replace us!" as he marched to the statue ofThomas Jefferson on the University of Virginia campus, and said the death of Heather Heyer, who was killed while protesting white nationalists at the rally, was justified, adding, “I think that a lot more people are going to die before we’re done here.”

Officials at the Commonwealth’s Attorney’s Office of Albemarle County in Charlottesville said yesterday morning they have issued four warrants for Cantwell's arrest. According to one report, the warrants were related to the “illegal use of gases, and injury by caustic agent or explosive.”

In interviews with The New York Times, Cantwell said he believes the warrants are connected to an episode he said was photographed by a journalist where he is “pepper-spraying a guy straight in his face as he’s coming toward me.”

“I thought that spraying that guy was the least damaging thing I could do,” he said. “In my left hand, I had a flashlight. My other option, other than the pepper spray, was to break this guy’s teeth. O.K.? And I didn’t want to do that. I just wanted him to not hurt me.”

Emily Gorcenski, an activist for transgender rights says she filed a report against Mr. Cantwell with the University of Virginia police on August 12. She recalls standing to Cantwell's right when he used pepper spray on a group of counter-protesters.

“He sprayed basically the whole group,” Gorcenski said. “The whole thing was scary. I was targeted by people wearing swastika pins. It was terrifying.”

Cantwell maintains his innocence. “I don’t think I did anything wrong, and I’m looking forward to my day in court,” he told reporters.

The prospect of an arrest has loomed over Cantwell since the rally. He posted a video on August 12 in which he appeared to the point of tears.

“I’ve been told there’s a warrant out for my arrest,” Cantwell pleads to the camera. "I don't know what to do!"

In the video, Cantwell claimed he was too scared to go to the courthouse or meet police.

“I know we talk a lot of shit on the Internet,” Cantwell said. “Every step of the way we’ve tried to do the right thing and they just won’t stop. … Our enemies just will not stop.”

In the wake of the VICE documentary, The Southern Poverty Law Center described Cantwell as "an unapologetic fascist who spews white nationalist propaganda with a libertarian spin on his live-streamed call-in show."

Dating site OkCupid announced in a tweet that Cantwell had an account with the site––and then promptly banned him for life.

We were alerted that white supremacist Chris Cantwell was on OkCupid. Within 10 minutes we banned him for life.
— OkCupid (@OkCupid) 1502994294.0

Cantwell, per his OkCupid profile, is 6 feet tall, single, and “interested in getting married and having children” with the right woman. He describes himself not as a fascist, but as a podcaster “specializing in controversial political satire.”

Tech companies have rushed to purge extremists from their sites in the days since the Charlottesville rally. Facebook and Youtube have also terminated Cantwell's accounts. Cantwell confirmed Tinder had deleted his profile, too. In a blog post, he explained “these [Jews] will stop at nothing.”