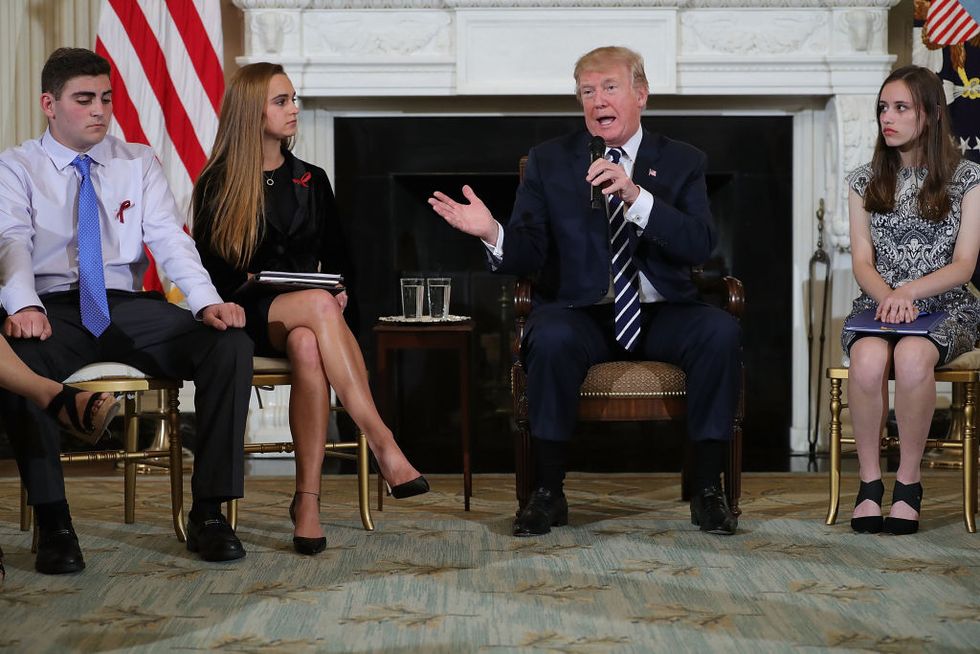 WASHINGTON, DC - FEBRUARY 21: (AFP OUT) U.S. President Donald Trump (C) speaks during a listening session with Marjory Stoneman Douglas High School students who survivied last weeks mass shooting (L-R) Jonathan Blank, Julie Cordover and Carson Abt and others in the State Dining Room at the White House February 21, 2018 in Washington, DC. Trump is hosting the session in the wake of last week's mass shooting at the high school in Parkland, Florida, that left 17 students and teachers dead. (Photo by Chip Somodevilla/Getty Images)

The Trump administration has issued a proposal which would provide some school personnel with "rigorous" firearms training and strengthen criminal background checks, but stopped short of increasing the minimum age to buy certain firearms. Previously, President Donald Trump had promised a change in the age requirement.

The president will also move ahead with an earlier proposal to ban bump fire stocks, which allow semiautomatic weapons to fire more rapidly. The Justice Department, per Attorney General Jeff Sessions, has submitted a proposed regulation to the Office of Management and Budget for review. The proposed regulation would ban bump stocks, classifying them as machine guns under federal law.

The proposal also includes a plan to establish a commission chaired by Education Secretary Betsy DeVos which will weigh in on policy and "funding proposals for school violence prevention," according to CNN. An official said the commission does not yet have a specified timeline of when it will report its findings and recommendations but said it should be within one year.

"Today we are announcing meaningful actions, steps that can be taken right away to help protect students," DeVos said yesterday.

She added: "Far too often the focus has been only on the most contentious fights––the things that have divided people and sent them into their entrenched corners. But the plan that we're going to advance and talk about is a pragmatic plan to dramatically increase school safety and to take steps to do so right away."

According to the proposal:

The administration has thrown its support behind the "Fix NICS" bill introduced by Senators John Cornyn (R-TX) and Chris Murphy (D-CT). The bill would set aside funding to improve the National Instant Criminal Background Checks system. The bill would hold federal agencies accountable if they fail to upload records to the background check system.

Congress has seemed apprehensive about strengthening the bill, but Trump has called for a more "comprehensive" measure.

"My takeaway is that we like to start with background checks and build from there and see where we can get consensus," Senator Cornyn said earlier this month, after the president's "surreal" meeting to propose stronger gun control baffled Republicans and infuriated the NRA. He added: "And to be the most obvious place to start is the Fix NICs bill that has 46 co-sponsors," noting that combining multiple gun bills into one piece of comprehensive legislation was "easier said than done."

Senator Marco Rubio (R-FL), who continues to battle scathing criticisms over his response to the shooting at Marjory Stoneman Douglas High School in the town of Parkland, Florida, where a gunman shot and killed 17 people last month, was far more skeptical.

"I think that's ideal if you could do it all at once," Rubio said. "I just don't think it's likely to pass knowing this place."

The administration has also signaled it would support the "STOP School Violence Act," which would provide states with "funding for training, technology and other assistance to help schools identify and prevent violent acts." The administration also announced it would support "extreme risk protection orders"––which it encourages the states to adopt.

These "extreme risk protection orders" would allow law enforcement officers, provided they have court approval, to remove firearms from those who pose a threat to themselves or others. The orders would also allow law enforcement to temporarily prevent these individuals from purchasing new firearms.

Additionally, the president is "calling for a review of the statutory and regulatory privacy protections to determine if any changes or clarifications are needed to improve coordination between mental health and other health care professionals, school officials, and law enforcement personnel."

Further, the administration announced that the proposed Federal Commission on School Safety will work on implementing processes to evaluate and make recommendations on school safety.

The commission will focus on:

The proposal has not been without its critics:

The proposal comes ahead of the National School Walkout, which is scheduled for March 14. Students and teachers across the United States will walk out of their schools and universities in memory of the Parkland victims. Those participating in the march have demanded Congress to ban assault weapons, require universal background checks before gun sales and pass a "gun violence restraining order law" which would allow courts to disarm people who exhibit warning signs of violent behavior.