CNN's Jim Acosta Asked Sarah Sanders to Assert That the Press Is Not the Enemy of the People, and Her Response Surprises Exactly Nobody 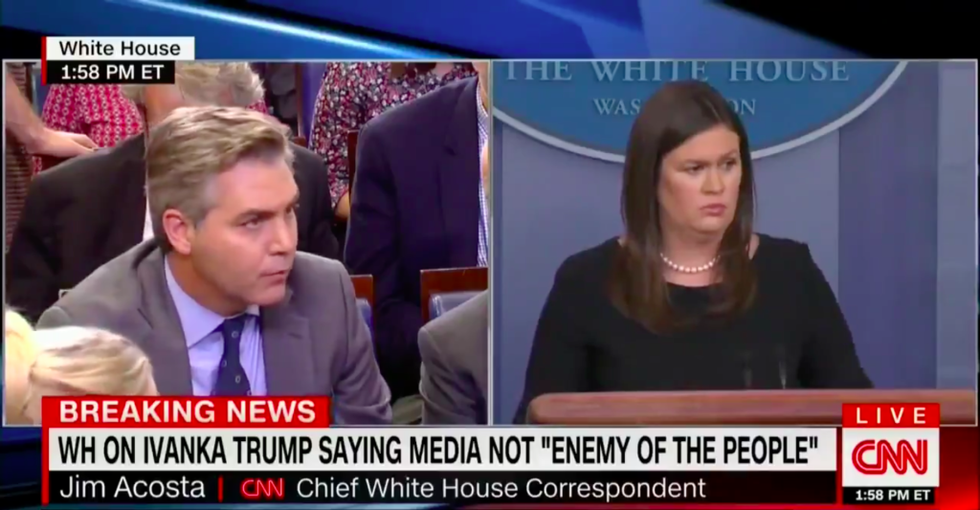 White House Press Secretary Sarah Huckabee Sanders refused to answer CNN reporter Jim Acosta when he asked her whether she considers the press "the enemy of the people" during today's White House press briefing.

Sanders stood by President Donald Trump's assertions that the press is the enemy, an opinion he's made no secret of holding when news outlets publish articles critical of him and his administration or at all related to special counsel Robert Mueller's investigation into his Russian ties.

Acosta added: "His own daughter [Ivanka Trump] acknowledges that, and all I'm asking you to do, Sarah, is acknowledge that right now and right here."

"I appreciate your passion. I share it," Sanders responded. "I've addressed this question. I've addressed my personal feelings. I'm here to speak on behalf of the president. He's made his comments clear."

The press briefing continued, with Sanders addressing concerns that members of the GOP are stalling the National Archive's production of Supreme Court nominee Brett Kavanaugh's records until October.

Acosta took to Twitter shortly afterward to denounce Sanders's reaction. "I am totally saddened by what just happened," he wrote.

I walked out of the end of that briefing because I am totally saddened by what just happened. Sarah Sanders was rep… https://t.co/VOvrsY4BYF
— Jim Acosta (@Jim Acosta) 1533232925.0

Many praised Acosta's questioning, however, as saddened as he might be by how the afternoon turned out.

@Acosta SHE'S the enemy of the people. And the fascist, child abducting traitor she works for. She needs remedial… https://t.co/ad9Dox1hyH
— Kathleen L August (@Kathleen L August) 1533236081.0

Acosta made headlines earlier this week after he was heckled by multiple Trump supporters in Tampa, Florida as he stood on a podium to cover one of the president's rallies.

"You're a liar!" yelled others.

Acosta engaged them, however, and later tweeted that he "took more questions from them than the president has taken from the press lately."

Sanders, meanwhile, has continued to blame members of the press for "furthering a divide" in our nation. Sanders also came under fire earlier today after she claimed that the media is at fault for thwarting U.S. spying on Osama bin Laden’s activities prior to the 9/11 terrorist attacks.

Sanders said the following as she answered a question about threats and insults reporters have faced from Trump supporters:

When it comes to the media the president does think that the media holds a responsibility. We fully support a free press, but there also comes a high level of responsibility with that. The media routinely reports on classified information and government secrets that put lives in danger and risks valuable national security tools. One of the worst cases was the reporting on the U.S. ability to listen to Osama Bin Laden’s satellite phone in the late 90s. Because of that reporting, he stopped using that phone and the country lost valuable intelligence.

That story, however, has been debunked, and CNN soon took Sanders to task for her claim.

CNN's Jeremy Diamond noted that Sanders appeared to be drawing on a claim by former President George W. Bush and the 9/11 Commission which asserted that "the US government was monitoring the phone," when, in fact, they were "merely reporting that bin Laden used a satellite phone––something that was widely known at the time."