Does he still believe that today? 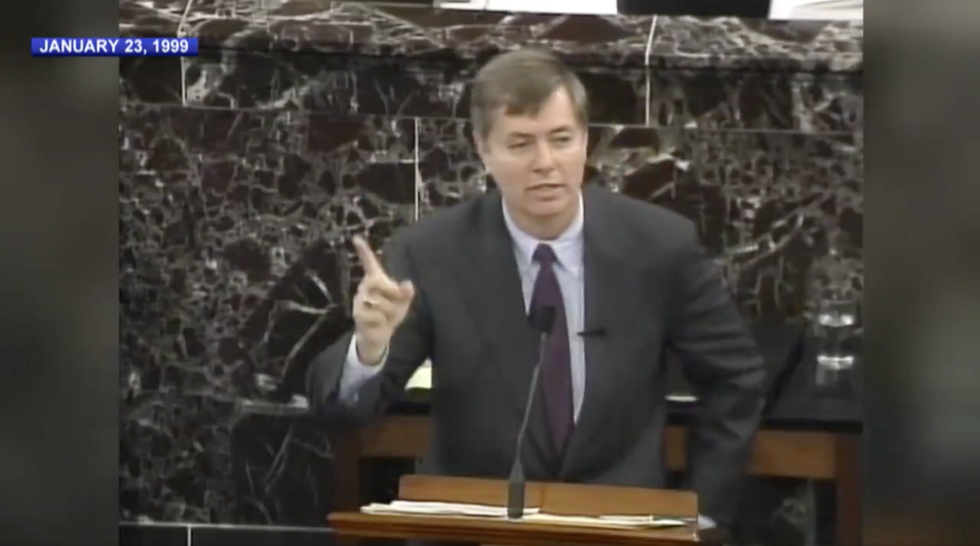 Senator Lindsey Graham (R-S.C.) has come under fire for comments he made about impeachment in 1999, providing a rather fitting juxtaposition to the inaction he's been criticized for as the nation contends with President Donald Trump's litany of both personal and political scandals.

Graham made the case for impeachment when President Bill Clinton was in office and when he was a member of the House of Representatives.

"You don’t have to be convicted of a crime to lose your job in this Constitutional Republic,” Graham said in a 1999 clip posted on Twitter by MSNBC’s Lawrence O'Donnell.

Every reporter must now ask @LindseyGrahamSC if he still believes in the standard he set for removing a president i… https://t.co/0QotGyXHsp
— Lawrence O'Donnell (@Lawrence O'Donnell) 1534908124.0

In 1999, Graham declared that the president could be impeached if "Congress decides “your conduct as a public official is clearly out of bounds."

The video has opened Graham up to significant criticism, with many wondering where the legislator who so openly advocated for Bill Clinton's impeachment––indeed, Graham was one of the House prosecutors during the Clinton impeachment proceedings––is today.

Cohen said under oath that he violated campaign finance laws to pay off adult film actress Stephanie Clifford and former Playboy model Karen McDougal at Trump’s behest. This is the first time the president himself has been implicated in a federal crime. (And On the same day, Paul Manafort, the president's former campaign manager was convicted of eight criminal counts by a grand jury in Virginia.)

Graham has not responded to requests for comment on the video of his statements on impeachment, but he did comment on Cohen's plea and Manafort's conviction, saying that both cases are proof that the legal system is doing the job it's designed to do. In the same message, however, he said that special counsel Robert Mueller's investigation has yet to secure any "charges or convictions for colluding with the Russian government by any member of the Trump campaign in the 2016 election."

The American legal system is working its will in both the #PaulManafort and #MichaelCohen cases. Thus far, there… https://t.co/gk00CsJPaq
— Lindsey Graham (@Lindsey Graham) 1534888045.0

It didn't end there, either.

"Senator Schumer may believe that the Michael Cohen and Paul Manafort cases invalidate the election – I do not," he wrote.

The backlash was swift; Graham's prior comments on impeachment dogged him again.

Graham's relationship with Trump has been rocky. He made headlines last month after criticizing Trump's decision to side with Russian leader Vladimir Putin over the assessment of U.S. intelligence agencies that Russian operatives worked to subvert the results of the 2016 presidential election, for example. But he has also stood by the president in the case of Kavanaugh and on other occasions, particularly as they relate to the president's economic and social agenda, much of which is considered a boon for many of his conservative supporters.

In 2016, Graham tweeted that the Republican Party, should it nominate Trump, "will get destroyed.......and we will deserve it."

At what point did Graham change his mind?