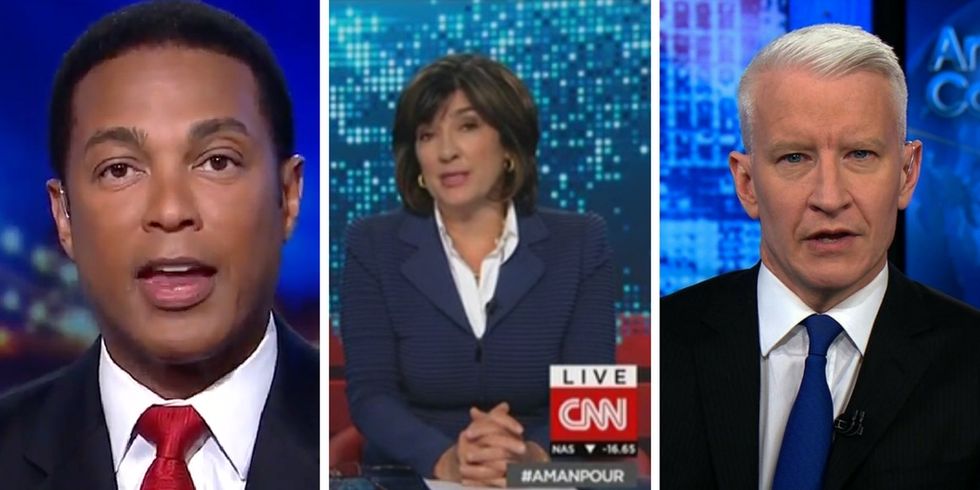 "CNN Tonight" anchor Don Lemon called out President Donald Trump's use of racial slurs, after the president called Senator Elizabeth Warren "Pocahontas" at an event meant to honor Native American WWII veterans on Monday. Lemon said the remark was “met with stunned silence ... because everyone in that room knew it was a racist slur directed at Sen. Elizabeth Warren.” Now other CNN anchors, fed up with Trump's slanderous and libelous remarks toward the network, have joined in condemning the president.

Trump has used this particular racial slur on numerous occasions, despite Native Americans asking him to stop, and that's not the only group or person he's insulted. For example, his birther attacks on former President Barack Obama are well documented.

“This aspect of Donald Trump isn’t new. It goes back for years,” Lemon said. “In fact, I asked him about it two years ago, when he was still a candidate. This is what he told me.” Lemon then shared a clip in which Trump claims he’s “the least racist person that you have ever met.” We also see a number of clips where Trump uses other racial slurs while on camera.

Lemon isn't the only CNN anchor who has lost their patience with the president. Trump’s most recent attack on CNN seems to have especially aggravated the network, prompting what appeared to be an organized response from Anderson Cooper, Wolf Blitzer, Christiane Amanpour and others in the same day.

Anderson Cooper said on Monday that the president's criticism is “frankly something that we’ve come to expect” at CNN. He later tweeted:"President Trump's assault against a free press 'won't stop my colleagues around the world who put their lives on the line to do their work -- to report.'"

Anderson Cooper's response follows several days of tweets from the president, including these:

CNN’s communications department responded to Trump’s tweets within minutes: “It’s not CNN’s job to represent the U.S. to the world. That’s yours. Our job is to report the news.”

And that was just the beginning.

“We have thick skin here at CNN,” host Anderson Cooper said on Monday. “We can handle criticism but we’ll damn sure call it out when it’s a lie.”

“The relentless pursuit of the truth and the outright rejection of any attack against it is something we still hold sacred, always will,” Blitzer said. “No matter how many insults or blatant assaults on the press and its freedom, this pursuit is something for which we will never bend nor break. Even the loudest critics can’t silence the facts.”

“CNN and CNN International are not sponsored by any state, nor any autocrat, or any political organization, and despite the constant criticism from the president, we are unwavering in our mission, free and independent as the press should be,” he added.

World-renown journalist and reporter Christiane Amanpour took to Twitter on Sunday to address the president's many criticisms of the CNN network.

"At CNN we dodge bullets to bring you the news. Nothing fake about that. If President Trump knew the facts, he would never have sent that tweet. Here is my (late) camerawoman Margaret Moth, who took a bullet in the face covering the facts and truth in Bosnia."

Then on Monday, she joined the others at CNN in addressing Trump's lies and accusations.

"It was shocking not only for what it says about President Trump’s state of mind, but for all but authorizing authoritarian regimes around the world to target CNN and other journalists. Without journos’ sacrifice and service, all that remains is propaganda and lies. Damned lies."