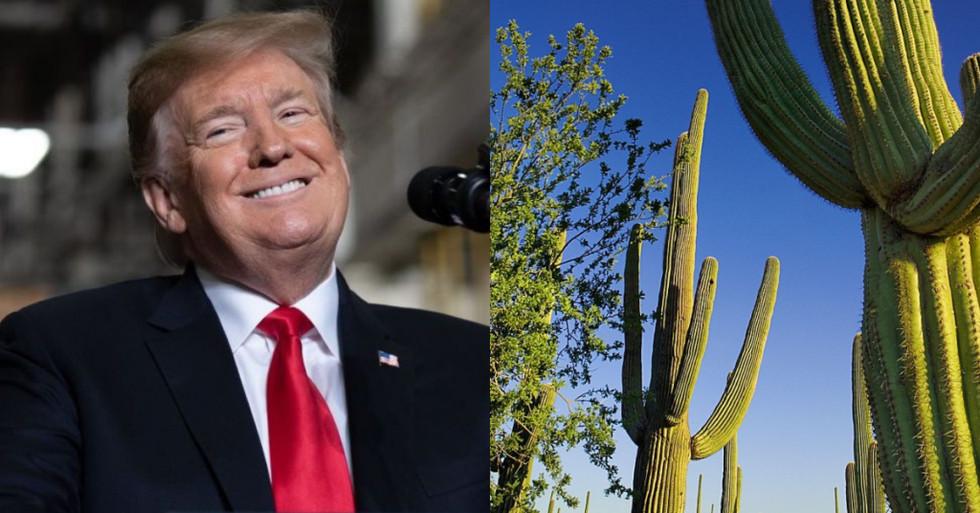 Saguaro cacti have a relatively long lifespan—often exceeding 150-175 years with their first arm sprouting around age 75-100—and can reach 40 feet in height. Thanks to conservation efforts, the once endangered plant native to the Sonoran desert of Arizona and parts of eastern California has gone from endangered to thriving.

Harming or vandalizing a saguaro in any manner is a class four felony and punishable with a possible 3 year, 9 month maximum sentence.

Unless you're destroying them to make way for President Donald Trump's border wall.

With Trump's wall announcement came news it would be exempt  from all environmental regulations and protections due to Trump's "national emergency."

Footage of what that means was made public as video of crews destroying hundred year old seguaros in the Organ Pipe Cactus National Monument spread on social media.

But when Dahl visited Organ Pipe Cactus National Monument bulldozers were hard at work knocking down the multi-ton saguaros and other desert plants and piling them all into slash piles.

"At that point, what they were doing was destruction, not construction."

"In O'odham stories, ha:sañ (saguaro cactus) are our people. They give us so many blessings and we respect them so deeply."

@seukteomaaa @LaikenJordahl So sad this is happening to your community and our planet. All because of hate and fear.
— CanuckKim (@CanuckKim) 1570223747.0

And more than saguaros are in peril.

@LaikenJordahl @NPCA This is a Mexican Jaguar only a couple left on the So Arizona border with Mexico. #Individual1… https://t.co/puEYIIXunj
— GenXNukeBaby (@GenXNukeBaby) 1570291985.0

@LaikenJordahl @wtpickens1 @NPCA This is so gross! Unfortunately for Americans and our environment his tyrant presi… https://t.co/h56TwJKDxD
— Alison (@Alison) 1570227021.0

In addition to environmentalists, archeologists and anthropologists are also fighting to preserve the 16,000 years worth of historical sites also in the wall's path of destruction.

@LaikenJordahl @NPCA Nothing is more important to this dictatorship than "The Great Wall of TRUMP". He heard that C… https://t.co/wuw9b3JgSq
— Nikolai Roaminoff (@Nikolai Roaminoff) 1570244874.0

@LaikenJordahl @NPCA Rise up for public lands folks because this greedy criminal organization will destroy all of i… https://t.co/5kmCkj9Pw5
— Val Miller (@Val Miller) 1570219193.0

As mentioned, destruction or vandalism of a saguaro is a felony. Entering the United States without proper paperwork is at most a misdemeanor and not illegal if the person is seeking asylum.