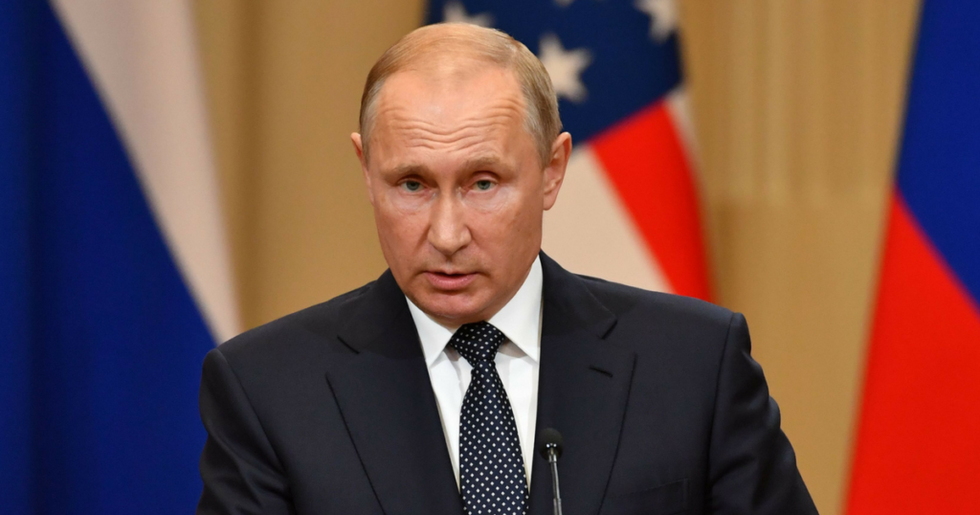 Russia's President Vladimir Putin speaks during a joint press conference with US President after a meeting at the Presidential Palace in Helsinki, on July 16, 2018. - The US and Russian leaders opened an historic summit in Helsinki, with Donald Trump promising an 'extraordinary relationship' and Vladimir Putin saying it was high time to thrash out disputes around the world. (Photo by Yuri KADOBNOV / AFP) (Photo credit should read YURI KADOBNOV/AFP/Getty Images)

The Russian government has released footage of a newly developed nuclear weapon capable of avoiding detection by American defense systems and specially designed to spread radioactive fallout over as wide an area as possible.

The Poseidon nuclear torpedo is one of the latest generations of atomic weapons Russia has added to its arsenal. In May, the Russian defense ministry announced that Poseidon can carry a two-megaton thermonuclear warhead and is intended to be able to destroy enemy naval installations and inflict as much damage as possible to surrounding areas. The ministry first teased the existence of Poseidon in 2015.

"It will be possible to mount various nuclear charges on the ‘torpedo’ of the Poseidon multipurpose seaborne system, with the thermonuclear single warhead similar to the Avangard charge to have the maximum capacity of up to 2 megatonnes in TNT equivalent," reported Russian news agency TASS.

The unidentified source within the defense ministry added that Poseidon "is primarily designed to destroy reinforced naval bases of a potential enemy."

But Poseidon is far more deadly than the bombs with which the world is familiar.

Normally, nuclear and thermonuclear weapons are engineered to deliver a knockout punch of heat and pressure to a specific, albeit large target such as a city. Radioactive fallout is generally a side-effect, affecting a relatively small radius around the explosion.

Poseidon, however, carries the ability to spread lethal radioactive fallout over a widespread area. This enhances the destructive potential of this terrifying new torpedo.

"Nuclear weapons only generate significant amounts of radioactive fallout when they are detonated at, near, or beneath ground level," Stephen Schwartz, author of "Atomic Audit: The Costs and Consequences of US Nuclear Weapons Since 1940," told Business Insider.

"Where the fireball does not touch the surface of the earth," Schwartz said, "the only fallout is from the bomb debris itself and any dust particles in the air that come into contact with it."

Schwartz added Poseidon can "suck up dirt, or water, contaminates it with debris from the bomb, and then lofts it into the atmosphere," allowing deadly nuclear waste to be distributed over thousands of square miles. In this case, a plume of radioactive cobalt could irradiate a substantial part of the planet for decades.

When a thermonuclear weapon is surrounded with ordinary cobalt (cobalt-59) metal, the fast neutrons escaping the explosion will instantly transmute it into radioactive cobalt-60, which would vaporize, condense, and then fall back to earth tens, hundreds, or thousands of miles from the site of the explosion.

Business Insider noted: "one US analyst estimated that the cobalt would take 53 years to return to non-dangerous levels."

Hans Kristensen, the director of the Nuclear Information Project at the Federation of American Scientists, told Business Insider that Poseiden may be able to carry a nuclear payload of "anything from a normal yield to up to 100 megatons."

That's twice as large as the most powerful nuclear bomb ever tested, the Tsar Bomba, which the Soviet Union detonated in 1961. This hydrogen bomb exploded with the energy of 50 megatons of TNT.

Kristiansen said Poseidon amounts to "going in and blowing up a harbor with the purpose of blanketing a coastal area with radiation to make it uninhabitable" in a "blatant violation on the international laws of war, which require them to avoid collateral damage."

In addition to its destructive potential, Poseidon has been designed to avoid American missile defense systems, according to Russian defense ministry officials.

“As its main advantage, the Poseidon is actually 100% invulnerable to enemy counter-measures. The drone’s unique capabilities will enable the Russian Navy to fight carrier-led and surface action groups of a potential enemy in any areas of the oceanic theater of operations and strike coastal infrastructure facilities at an intercontinental distance,” the Russian defense ministry said.

Putin and Trump have both said they discussed the future of nuclear treaties between the United States and Russia in Helsinki, but there is no way to verify this as only a translator was present.

Following the Helsinki meeting, Putin reaffirmed Russia's commitment to extending the New START treaty, which is set to expire in 2021.

“I reassured President Trump that Russia stands ready to extend this treaty, to prolong it, but we have to agree on the specifics at first because we have some questions to our American partners,” Putin told Chris Wallace in an interview on Fox News. “We think that they are not fully compliant with the treaty, but this is for experts to decide.”

Poseidon wasn't the only advanced weapon Russia has admitted to testing. The Russian defense ministry also announced tests of a "Peresvet high-powered laser weapons system” and a hypersonic Kinzhal nuclear cruise missile. TASS reported that Kinzhal has an "unlimited range" and is “invincible to all the existing and advanced air and missile defense systems."