Alongside Egypt and Ethiopia. 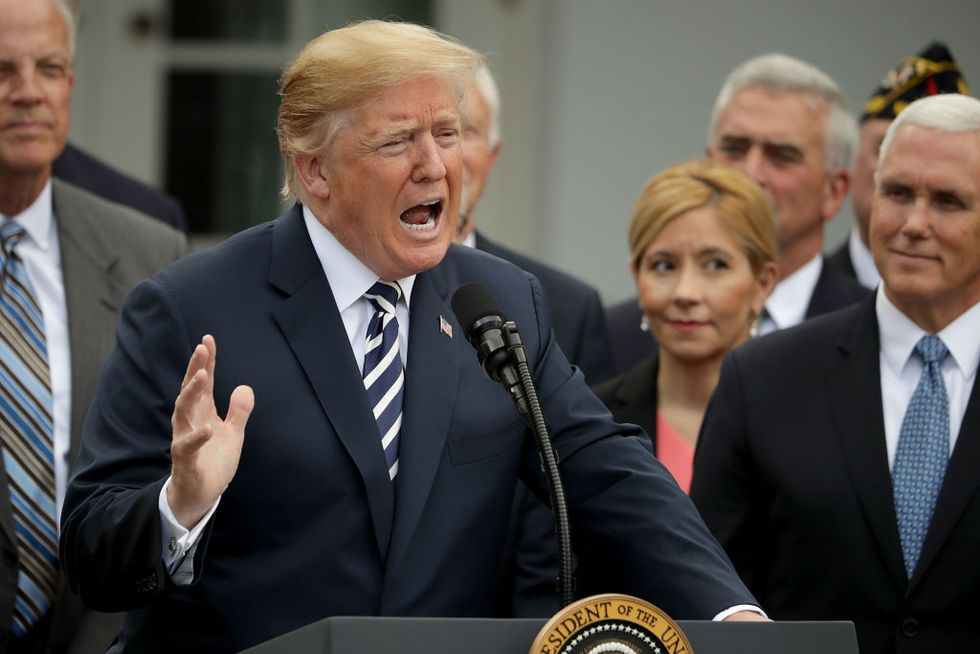 WASHINGTON, DC - JUNE 06: U.S. President Donald Trump delivers remarks during a signing ceremony for the Veterans Affairs Mission Act in the Rose Garden at the White House June 6, 2018 in Washington, DC. The new law continues funding for the Veterans Choice Program for an additional year, extends comprehensive caregiver benefits to veterans injured and ill prior to September 11, 2001, and funds development of a plan to modernize the Department of Veterans Affair's health care infrastructure. (Photo by Chip Somodevilla/Getty Images)

The United Nations has condemned President Donald Trump and his administration for violating human rights with the new immigration policy separating children from their parents at the Mexican border.

The U.N. noted that several hundred children crossing the southern United States border have been held in custody since October 2017 following an executive order issued by President Trump shortly after he took office.

The U.N.'s rebuke comes scarcely a week since Trump administration officials announced they will soon begin fingerprinting parents claiming custody of children who entered the U.S. illegally without an adult relative.

“The U.S. should immediately halt this practice of separating families and stop criminalizing what should at most be an administrative offense – that of irregular entry or stay in the U.S.,” U.N. human rights spokeswoman Ravina Shamdasani told a briefing in Geneva.

The official statement is below:

We are deeply concerned that the zero tolerance policy recently put in place along the US southern border has led to people caught entering the country irregularly being subjected to criminal prosecution and having their children – including extremely young children -taken away from them as a result.

The practice of separating families amounts to arbitrary and unlawful interference in family life, and is a serious violation of the rights of the child. While the rights of children are generally held in high regard in the US, it is the only country in the world not to have ratified the UN Convention on the Rights of the Child. We encourage it to accede to the Convention and to fully respect the rights of all children.

The use of immigration detention and family separation as a deterrent runs counter to human rights standards and principles. The child’s best interest should always come first, including over migration management objectives or other administrative concerns. It is therefore of great concern that in the US migration control appears to have been prioritised over the effective care and protection of migrant children.

Children should never be detained for reasons related to their own or their parents’ migration status. Detention is never in the best interests of the child and always constitutes a child rights violation.

Information from various sources suggests that several hundred children have been separated from their families since last October. The practice of separating children from their parents is being applied to both asylum-seekers and other migrants in vulnerable situations, and we note that the American Civil Liberties Union has brought a class action case on behalf of hundreds of parents who have been forcibly separated from their children.

The majority of people arriving at the U.S.’s southern border have fled Honduras, Guatemala and El Salvador – in many cases either because of rampant insecurity and violence, or because of violations of a range of other rights, such as health, education, and housing.

The US should immediately halt this practice of separating families and stop criminalizing what should at most be an administrative offence – that of irregular entry or stay in the US.

We call on the US authorities to adopt non-custodial alternatives that allow children to remain with their families and fulfil the best interests of the child, their right to liberty and their right to family life.

The U.S. wasn't the only nation slammed by the U.N.––Egypt was censured as well.

The agency also called out Egyptian officials for "a spate of arrests, interrogations and detentions of activists, bloggers and journalists in Egypt over the last few weeks appears to indicate a significant escalation in the crackdown against the rights to freedom of expression, association and assembly in the country."

We are extremely concerned that arrests like this, often followed by harsh sentences, and often for simply exercising the rights to freedom of opinion, expression and assembly, have become commonplace. Arbitrary detention has become a chronic problem in Egypt. The UN Working Group on Arbitrary Detention regards the deprivation of liberty as arbitrary when it results from the exercise of certain rights and freedoms, including the rights to freedom of expression and assembly. It is important that civil society, including human rights defenders, journalists and others, is able to highlight issues of concern and serve as watchdogs. But instead they are being jailed, including for mere tweets critical of the authorities, as well as being subjected to other reprisals, such as travel bans, freezing of assets, intimidation and harassment, and an extremely restrictive legal environment in which to operate.

We call on the authorities to fully ensure the rights of all detainees to their physical and psychological integrity, and to due process.

We call unequivocally for the immediate and unconditional release of all those currently being held by the Egyptian authorities for the legitimate exercise of their human rights.

Ethiopia fared significantly better. The U.N. praised the lifting of the State of Emergency Decree, which took place "three months ahead of its expiration date":

We also welcome the release on 26 May of a number of political detainees, bloggers and other individuals who had been detained following their participation in protests in recent years. The Attorney-General, in announcing these releases, said they were made with the intention to widen the political space, as part of Prime Minister Abiy Ahmed’s agenda.

During his visit to Ethiopia in April this year, UN High Commissioner for Human Rights Zeid Ra’ad Al Hussein had witnessed the tremendous hope among civil society activists, traditional leaders and others in Ethiopian society that the new Government would act swiftly to secure human rights protections for everyone in the country. These latest developments are positive indications, and our Regional UN Human Rights Office for East Africa remains ready to help continue to advance the promotion and protection of human rights in Ethiopia.

Neither President Trump nor the White House, via Press Secretary Sarah Huckabee Sanders or her associates, has commented on the U.N.'s statement.

Instead, the president has doubled down on the need for tightened border security.

This morning, he praised Senate Majority Leader Mitch McConnell (R-KY), saying that his decision to cancel the Senate August recess might compel Democrats to "finally get something done other than their acceptance of High Crime and High Taxes."

Yesterday, the president claimed that the decision to separate families at the border "is the fault of bad legislation passed by the Democrats."

Trump is incorrect, however.

Politifact, the Pulitzer Prize-winning fact-checking service, notes that while the Homeland Security Department's longstanding policy "is to separate children from their custodians when they are referred for criminal prosecution," the Trump administration has opted to "prosecute all illegal crossings." Families "were rarely prosecuted under previous administrations."

Additionally, Politifact observes, the 1997 Flores Settlement Agreement "calls for the release of unaccompanied minors to family members or sponsors who can care for them as their immigration case is resolved." The Trafficking Victims Protection Reauthorization Act of 2008, "which Trump has wrongly called 'a Democrat rule,' determines that unaccompanied minors be transferred to Health and Human Services custody."

If people don’t want to be separated from their children, they should not bring them with them,” Sessions said during an interview with conservative radio host Hugh Hewitt. “We’ve got to get this message out. You’re not given immunity.”

“I don’t think children should be separated from biological parents at any age, but especially if they’re infants and toddlers,” Hewitt told Sessions. “I think it’s traumatic and terribly difficult on the child.”

“And every time somebody, Hugh, gets prosecuted in America for a crime, American citizens, and they go to jail, they’re separated from their children,” Sessions replied.

Admitting he had not personally visited any of the facilities where the children are housed, Sessions said, “But I believe for the most part they’re well taken care of. We need to get this border under control.”