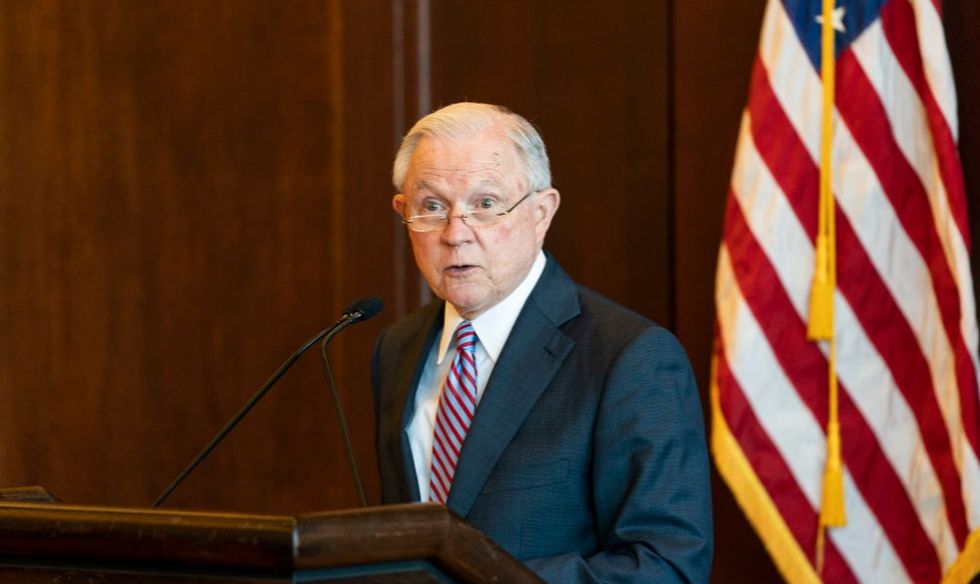 After announcing in May he was directing the Department of Justice to prosecute all people entering the United States through the southern border in criminal court, Jeff Sessions told varying stories about the reasoning and intent of the Trump administration policy change: it's an effective deterrent, it's Biblical, the Democrats made him do it, it's a law.

But on Thursday, in an appearance on the Christian Broadcasting Network (CBN), Sessions told a(nother) different story to interviewer David Brody.

It [fallout from Trump's policy change] hasn't been good and the American people don't like the idea that we are separating families. We never really intended to do that."

In the past, the misdemeanor violation was sent to civil immigration court instead of criminal court on a case by case basis. Families and asylum seekers without criminal records often went to civil court.

But President Donald Trump wanted his zero tolerance policy to impact asylum seekers, families, and unaccompanied children who enter the United States without prior authorization. So in May, Sessions announced he directed all federal prosecutors to pursue criminal prosecution for the misdemeanor violation.

The prosecution of an individual is always at the discretion of the prosecutor. As top prosecutor in the United States, Attorney General Jeff Sessions wielded sole responsibility for enacting President Donald Trump's policy change.

With that policy change —treating asylum seekers, families with no criminal records, and unaccompanied minors as criminals— came a need to take children into federal custody, separating them from their families. Children cannot be housed in adult jails and prisons.

This was a known outcome before Trump's zero tolerance policy was enacted. According to a Wall Street Journal report, there is evidence the Trump administration planned to accommodate the children they would be separating from their families, in the concentration camps they now have set up, before their policy change announcement.

But why would you plan for an unintended consequence?

The preparations in advance appear to indicate the separation of children from their parents was intended despite Session's claim to the contrary on CBN. The harsh backlash appears to be the only unintended part of Trump's zero tolerance policy.

Sessions lamented to Brody about the criticism he received, especially from fellow Christians, who were critical both of Trump's policy and Sessions citing the Bible to justify it.

"I don't think it was an extreme position that I took," said Sessions.

I directed it not to say that religion requires these laws on immigration. I just simply said to my Christian friends, 'You know, the United States has laws and I believe that Paul was clear in Romans that we should try to follow the laws of government of which we are a part'."

"I believe, strongly, that it is moral, decent and just for a nation to have a lawful system of immigration," Sessions stated. "I'm not aware of a single nation in the world that doesn't have some sort of rules about who can enter and who cannot enter."

I believe there is biblical support for that, too."

On the subject of the criticism he received, including from his own church, the United Methodists who charged him with racism, child abuse and immorality, Sessions stated,

It is painful. I am pretty well resolved that we try to consider the concerns that people have if they're legitimate. I have critics from a lot of different areas. I think our church people are really concerned about children – that's what I'm hearing. I feel it."

Sessions' interview won't air until Friday on CBN, but people are already disputing his version of the facts —that the separation of children from their families was unintended— surrounding Trump's zero tolerance policy.

In the months before the Trump administration began its “zero-tolerance” policy, the government awarded a flurry of… https://t.co/Ct27NEcMU8
— Rebecca Ballhaus (@Rebecca Ballhaus) 1529605640.0

Sessions says the administration never intended to separate families. So what was he plugging the day the zero tol… https://t.co/S2KRIPgTGc
— Tal Kopan (@Tal Kopan) 1529609202.0

@TalKopan @maggieNYT Sessions announced the policy with fervor and glee and then defended it with Bible verses and… https://t.co/YC29k8xcCu
— HRCSuperVol1 (@HRCSuperVol1) 1529609983.0

@TalKopan @maggieNYT Is this from the Onion, cuz the Sessions, Trump, Miller, Kelly all knew what they were doing.
— Veronica Garza (@Veronica Garza) 1529610629.0

@samstein "Blessed be the liars, and the lying lies they lie to save their raggedy ass." Remember that Bible quote… https://t.co/5ivABJEm4Y
— larryleclair (@larryleclair) 1529610980.0