Donald Trump Thought Pulling Out of the Iran Deal Would End It, But France, Britain and Germany Have Other Plans 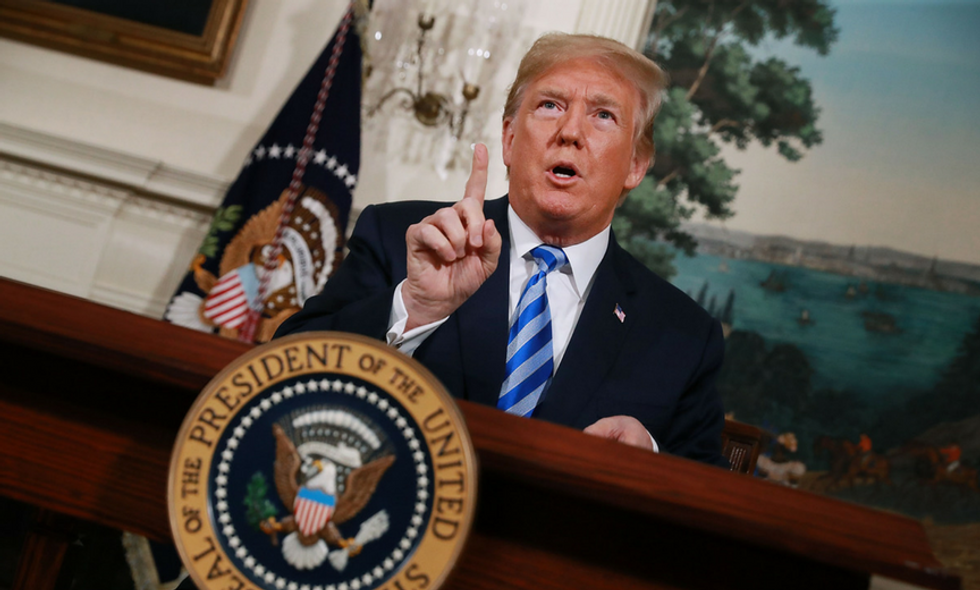 WASHINGTON, DC - MAY 08: U.S. President Donald Trump announces his decision to withdraw the United States from the 2015 Iran nuclear deal in the Diplomatic Room at the White House May 8, 2018 in Washington, DC. After two and a half years of negotiations, Iran agreed in 2015 to end its nuclear program in exchange for Western countries, including the United States, lifting decades of economic sanctions. Since then international inspectors have not found any violations of the terms by Iran. (Photo by Chip Somodevilla/Getty Images)

Last week, Donald Trump announced his intention to withdraw from the Iran nuclear deal, calling it "defective to the core."

Many saw it as a direct insult to our European allies, as the latest Der Spiegel cover illustrated:

But if President Trump thought the move would blow up the deal, European leaders seem to be saying, "not so fast."

On Tuesday, foreign ministers from the U.K., France and Germany met with Iranian Foreign Minister Mohammad Javad Zarif to see how they could continue the agreement, to which they had all been original signatories.

“The U.K. and our European partners continue to view the nuclear deal as vital for our shared security, and remain fully committed to upholding it.”

“We will look at potential options for supporting continued sanctions relief for Iran to ensure we meet our commitments under the deal, as well as calling on Iran to continue to abide by the restrictions the deal places upon their nuclear program."

Boris Johnson has called on Iran to stick to its nuclear agreement with the UK, France and Germany https://t.co/koDKgBvISP
— Sky News (@Sky News) 1526324808.0

Zarif held an hour-long meeting with EU foreign policy chief Federica Mogherini about the deal and expressed optimism, saying talks were “on the right track" when it comes to ensuring that the elements of the deal for the “remaining participants, particularly Iran, will be preserved and guaranteed.”

@SkyNews That's good America must stop bullying other countries it's not good not everything must be going in America's way
— Dalirani Mngerezi (@Dalirani Mngerezi) 1526326424.0