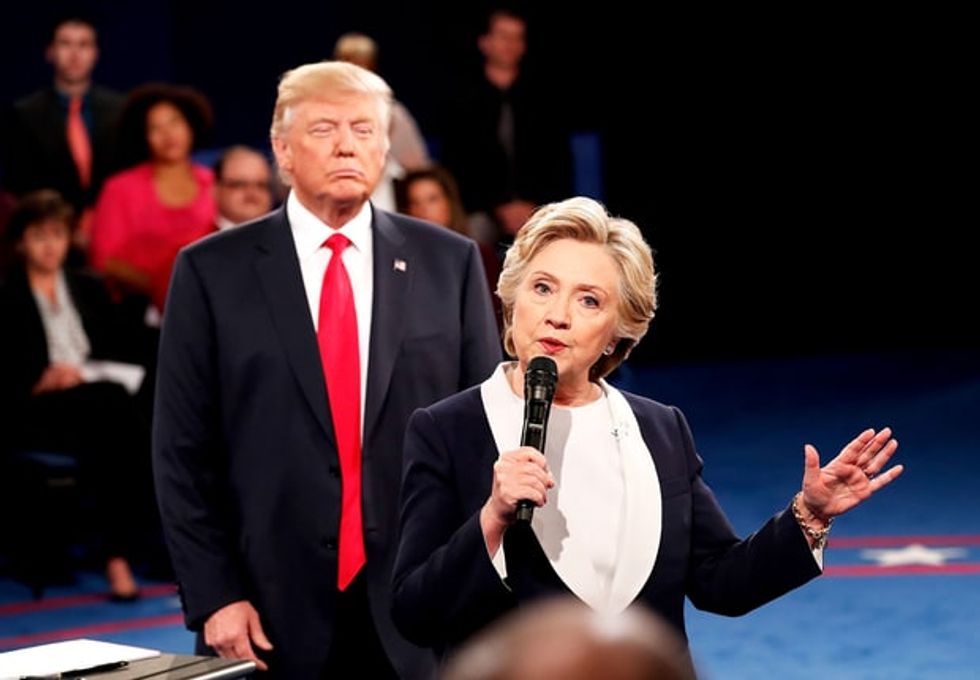 It was a debate that was at many times more about the tenor and tone of the campaign than the issues, where many tuned in to see how Donald Trump would respond to a leaked videotape from 2005 in which he appeared to advocate and admit to sexual assault. Half the evening played out on social media, with much of America watching with one eye on the stage and the other on instant public commentary flooding across Facebook and Twitter.

The firestorm began before the debate with Trump calling an unusual press panel with three women who had accused Bill Clinton of sexual misconduct. As news broke of the unprecedented move, some criticized it as a transparent ploy to deflect attention from Trump's own problems with women. Readers of the news mocked the effort roundly:

Trump also received scathing criticism for the way he handled a question about the leaked videotape. "This was locker room talk. I'm not proud of it. I apologized to my family and I apologized to the American people. Certainly I'm not proud of it. But this is locker room talk,” he said. Current and former professional athletes expressed their dissatisfaction with Trump’s response. NBA player Kendall Marshall scoffed at Trump’s characterization before taking Trump to task on the matter of consent:

Chris Conley, a wide receiver for the Kansas City Chiefs, tweeted that he is “in locker rooms every day” but that he never hears men talk the way Trump alleged they do:

Trump veered away from his comments on the tapes midway through his response to launch into a discussion about ISIS and violent threats on American lives. “There’s more important issues to worry about,” he said. Trump’s dismissal drew the ire of writer Rachel Simon, who noted that according to RAINN, “one out of every six American women has suffered an attempted or completed rape in her lifetime” and that

an American is assaulted every two minutes. “This comment is not only frustrating to hear, it's also innately wrong,” she wrote. “Of course, ISIS and terrorism are major issues that deserve to be discussed. But sexual violence is also a hugely important subject, and to diminish its significance is incredibly problematic.”

Twitter immediately erupted after Trump stalked behind Clinton, standing deep in her space. When he wasn’t pacing around the stage, Trump stood directly behind her while he waited for an opportunity to speak. “During Clinton’s time, Trump wandered around the stage like a bored child at a wedding. He paced back and forth like a patriarch impatiently allowing a woman to speak but thinking better of it,” wroteSlate’s L.V. Anderson. Many Twitter users characterized his behavior as predatory.

He's physically trying to intimidate her by standing right behind her this is cray #debate
— Sarah Silverman (@Sarah Silverman) 1476063037.0

Footage from last night’s debate shows Trump not only lurking behind Clinton but seemingly unable to keep still.

I'm a Muslim, and I would like to report a crazy man threatening a woman on a stage in Missouri. #debate
— Moustafa Bayoumi (@Moustafa Bayoumi) 1476063522.0

I am still processing the moment that Donald Trump referred to Muslims as "they" while speaking directly to a Muslim woman.
— rhea butcher (@rhea butcher) 1476065245.0

The hashtag #MuslimsReportStuff also started to take off:

In perhaps the debate’s most shocking moment, and one that landed well for Trump, the GOP nominee threatened to order a special prosecutor to investigate Clinton if elected,

and to put her in jail if he were elected president. The line played well to his alt-right base but horrified political commentators and leaders, including Nobel laureate Paul Krugman and former United States Attorney General Eric Holder:

Let's be clear: a candidate for president promised to put his opponent in jail if he wins. Everything else is secondary.
— Paul Krugman (@Paul Krugman) 1476068374.0

Trump supporters rejoiced at Trump’s assertiveness, as evidenced by comments and reactions on Trump’s Facebook page:

Whether or not Trump finds his footing again with his base, he continues to lag in the polls, faces increasing defections from GOP Leaders, and suffers high negatives from women voters--a demographic that may have eroded further after his behavior at the debate. To close the gap, Trump will need to repair the significant damage inflicted by the leaked tape. But with only 30 days to go and voting already underway in key swing states like Florida and North Carolina, the window to fix his image problem may be closing much too quickly for Trump to stage a final rebound.