Old Audio of Tucker Carlson Using the C-Word and Describing Women as 'Primitive' Just Emerged Online, and His Response Is Peak Tucker Carlson 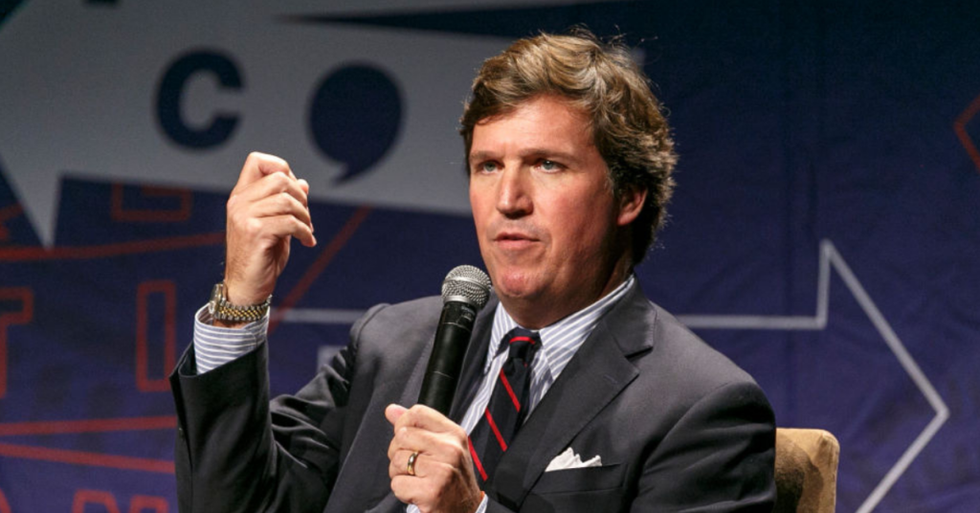 Calls to boycott Fox News personality Tucker Carlson's program if not fire him outright have intensified since media watchdog Media Matters surfaced audio of Carlson arguing that women are “extremely primitive” beings who “just need to be quiet and kind of do what you’re told” when he called into a shock jock radio show.

Carlson repeatedly called into the radio program Bubba the Love Sponge between 2006 and 2011, Media Matters reports. He was working for MSNBC and Fox News at the time and devoted about an hour a week to these phone calls, during which he regularly made misogynistic comments. A roundup of some of his remarks has been included below.

“You know what gets women going is arguing with them,” Carlson said in 2006. He added:

In 2007, he claimed to actually “love women," but added the following caveat: “But they're extremely primitive, they're basic, they're not that hard to understand. And one of the things they hate more than anything is weakness in a man.”

Describing the advertisement, Carlson referred to the two women as "the biggest white whores in America."

ON TV HOST ALEXIS STEWART, THE DAUGHTER OF MARTHA STEWART

Speaking of Stewart, Carlson referred to her as "c*nty," and said he wanted to “give her the spanking she so desperately needs.”

DURING A CONVERSATION ABOUT POLYGAMIST CULT LEADER WARREN JEFFS

In 2011, Jeffs, the President of the Fundamentalist Church of Jesus Christ of Latter-Day Saints, was convicted of two felony counts of child sexual assault. He is currently serving a sentence of life plus 20 years.

In 2009, Carlson called into Bubba the Love Sponge and suggested Jeffs was sent to prison because “he’s weird and unpopular.”

“I just don't think it's the same thing exactly as pulling a child from a bus stop and sexually assaulting that child," he said of Jeff's habit of facilitating illegal marriages between his adult male followers and underage girls. “The rapist, in this case, has made a lifelong commitment to live and take care of the person, so it is a little different. I mean, let's be honest about it.”

The show's co-host called Carlson's defense of Jeffs "twisted" and "demented," but Carlson was firm.

“He's not accused of touching anybody, Carlson said. “He is accused of facilitating a marriage between a 16-year-old girl and a 27-year-old man.”

The recording sparked outrage. Two hashtags, #FireTuckerCarlson and #BoycottTuckerCarlson immediately began to trend. The latter targeted Carlson's advertisers, which include Capital One, Coravin, and Outback Steakhouse.

Fox News has declined to comment on the scandal and Carlson has not apologized for his remarks, though he issued a statement via his official Twitter account.

"Media Matters caught me saying something naughty on a radio show more than a decade ago," he said in part. He added: "Anyone who disagrees with my views is welcome to come on and explain why."

Angelo Carusone, the head of Media Matters, addressed Carlson directly and explained why the organization released the recording.

"The reason we released this is precisely because the things you say on your Fox News show echo the misogyny displayed in those clips," Carusone said. "We were actually helping people better understand just how vile your current Fox News show is by showing what that worldview really looks like."