Trump Tweet about "Tapes" of Comey Lead to Calls for Subpoenas 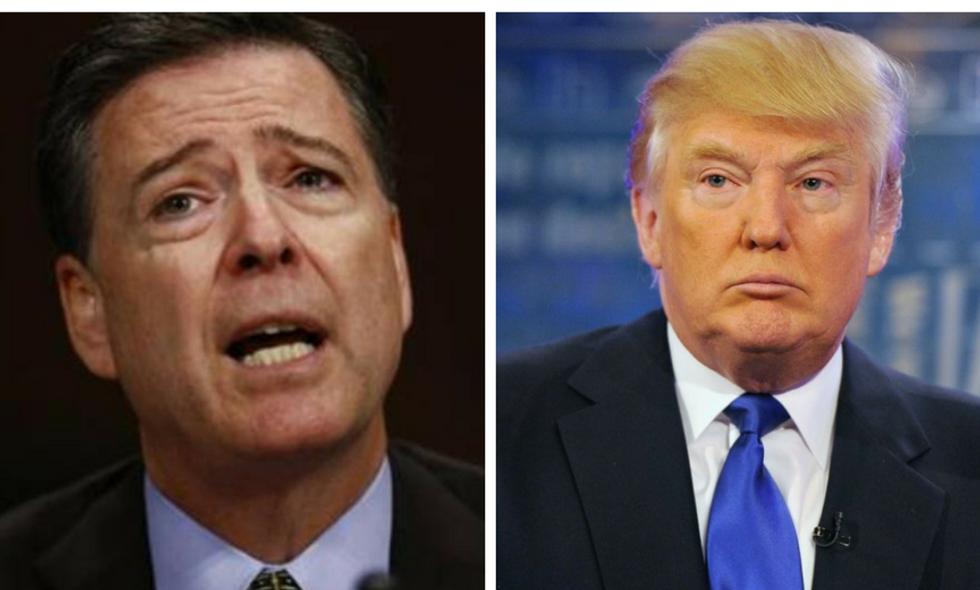 President Trump now has a "tapes" problem of his own making.

In his May 9th letter to James Comey informing him that he was fired, Donald Trump included a reference to "three separate occasions" when Comey supposedly informed the President that he was "not under investigation." During an interview with Lester Holt two days later, Trump elaborated, describing a dinner with Comey at the White House early on in his presidency.

That same day, reporting emerged portraying a much different dinner, one at which Trump demanded loyalty from Comey and he refused to give it. Trump's version of events was also called into question by Acting FBI Director Andrew McCabe, who testified in front of the Senate Intelligence Committee that "it is not" standard practice for the FBI to inform a potential target of an investigation whether or not he was in fact under investigation.

All of this prompted Donald Trump to tweet on Friday what appeared to many to be a threat directed at James Comey.

James Comey better hope that there are no "tapes" of our conversations before he starts leaking to the press!
— Donald J. Trump (@Donald J. Trump) 1494591975.0

Now, many in Washington on both sides of the aisle are calling on the President to produce any such tapes, if they in fact exist.

On Meet The Press on Sunday, Republican Senator Lindsey Graham said "You can't be cute about tapes. If there are any tapes of this conversation, they need to be turned over." Senator Mike Lee expressed similar sentiments on Fox News Sunday, saying, "I think it's probably inevitable at this point if there are recordings they will be subpoenaed and will be turned over."

Rep. Adam Schiff, the top Democrat on the House Intelligence Committee, also threatened to subpoena the tapes on Face The Nation on Sunday.

If tapes exist, Congress must get them voluntarily if possible, by subpoena if necessary. If there's obstruction, t… https://t.co/BCZ0U75xSO
— Adam Schiff (@Adam Schiff) 1494779320.0

On CNN on Sunday, Democratic Senate Minority Leader Chuck Schumer warned Trump against destroying any tapes that may exist. "To destroy them would be a violation of law," Schumer said. "He should turn them over to Congress and to the investigators. If there are no tapes, he should apologize to both Jim Comey and the American people."

When asked about the existence of such tapes, Donald Trump refused to elaborate. “That I can’t talk about. I won’t talk about that,” Trump told Judge Jeanne Pirro on Fox News. “All I want is for Comey to be honest. And I hope he will be. And I’m sure he will be—I hope.” Sean Spicer was similarly evasive with reporters. When asked about the existence of any tapes, Spicer replied "The President has nothing more to add on that...the tweet speaks for itself."

Their refusal to either confirm or deny the existence of such White House recordings seems to only stiffen the resolve of Democrats to get to the bottom of this latest Trump controversy, setting up a showdown with Congress.

As Senator Mark Warner, ranking member of the Senate Intelligence Committee, told Chris Wallace on Sunday, “The whole notion that the president can throw out these kind of claims and then not either confirm or deny them is outrageous in my mind."

“And if there is the existence of tapes, I want to make sure, one, they’re preserved and not mysteriously destroyed in the coming days, and then two, one way or the other, Congress will have to get a look at those tapes.”