Trump Tower Moscow Was a Lot Closer to Happening Than Trump Claims, and CNN Has the Receipts 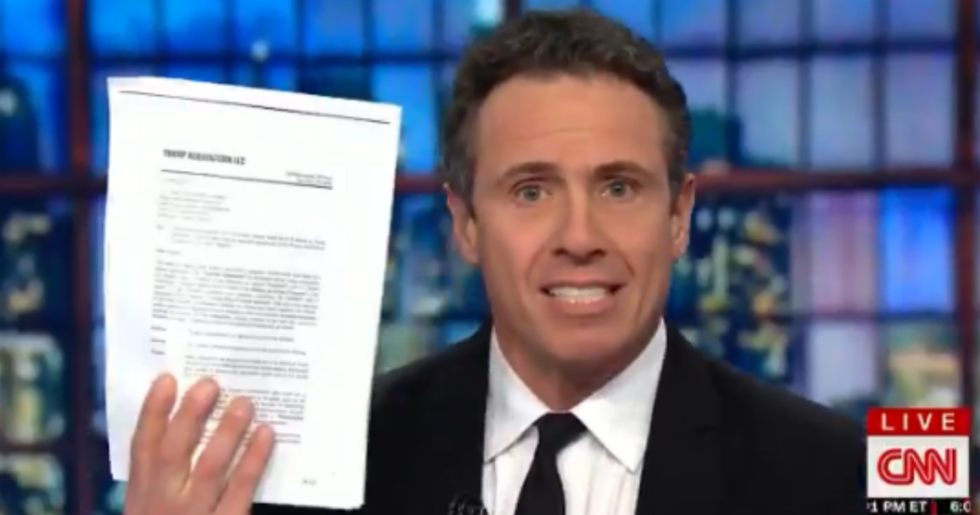 CNN's Chris Cuomo on Tuesday obtained a letter of intent for Trump Tower Moscow signed by Donald Trump in 2015.

Giuliani told @DanaBashCNN two days ago that for Trump Tower Moscow, "there was a letter of intent to go forward, b… https://t.co/fRlACQNZQb
— Marshall Cohen (@Marshall Cohen) 1545191305.0

Over the weekend, Trump's TV "lawyer" Rudy Giuliani denied that Trump had ever signed such a document.

“It was a real estate project,” Giuliani said. “There was a letter of intent to go forward, but no one signed it.”

Cuomo made clear the significance of the letter, which Trump inked on the same day as the first Republican primary of the 2016 election cycle.

"Ths is the letter of intent for the proposed Trump Tower Moscow," said Cuomo. "It is signed by Donald J. Trump."

Cuomo pointed out that Trump has gone from claiming he never pursued a Trump Tower deal in Moscow to his more recent assertions that he was allowed to make real estate deals while running for president.

“There would be nothing wrong if I did do it,” the president said in November. “I was running my business while I was campaigning. There was a good chance that I wouldn’t have won, in which case I would have gotten back into the business. And why should I lose lots of opportunities?”

Cuomo said the denials spewing from team Trump are designed to do one thing: mislead the public.

“Here’s what’s going on: This doesn’t matter legally, and that’s the point,” Cuomo said. “They’re not preparing for trial. Don’t examine it that way. They’re preparing for a PR campaign to convince you of what they want you to believe.”

He added: "This is a very negotiated situation. It didn't bind anybody anything. A letter of intent is just that. It means we're going to try to make this happen. But it was very well negotiated. There are a lot of riders on here, there are a lot of specifics on here and Donald J. Trump signed it."

The letter also bore the signature of Andrey Rozov, a Russian whose firm had committed to helping develop the property.

This is a big deal. Team Trump's lies are falling apart.

@CuomoPrimeTime @ChrisCuomo What happens in the dark is revealed in the light. Mr. Mueller and the Fourth Estate are the light!
— Winnie Robinson (@Winnie Robinson) 1545197016.0

Following Cuomo's show, Giuliani gave an interview with the New York Daily News in which he called the letter of intent "bullsh*t."

“It means nothing but an expression of interest that means very little unless it goes to a contract and it never did," Giuliani said. “That was the end of it."

He also tried to walk back saying that no one had signed the letter:

You tell us, chief.

Another day, another lie.

@MarshallCohen @DanaBashCNN @ChrisCuomo So when and where does the buck stop with these guys? Does it stop with the… https://t.co/hVrCupao53
— Tony Bynum (@Tony Bynum) 1545230408.0

@MarshallCohen @DanaBashCNN @ChrisCuomo The only reason Trump and his people lie to our face is because his support… https://t.co/jIcSbHy32v
— Jeff Kelly (@Jeff Kelly) 1545230189.0

Sorry Rudy, but truth is truth.