People Are Calling Donald Trump Out for His 'Narcissistic' 9/11 Tribute, and It Couldn't Be More Different Than Obama's 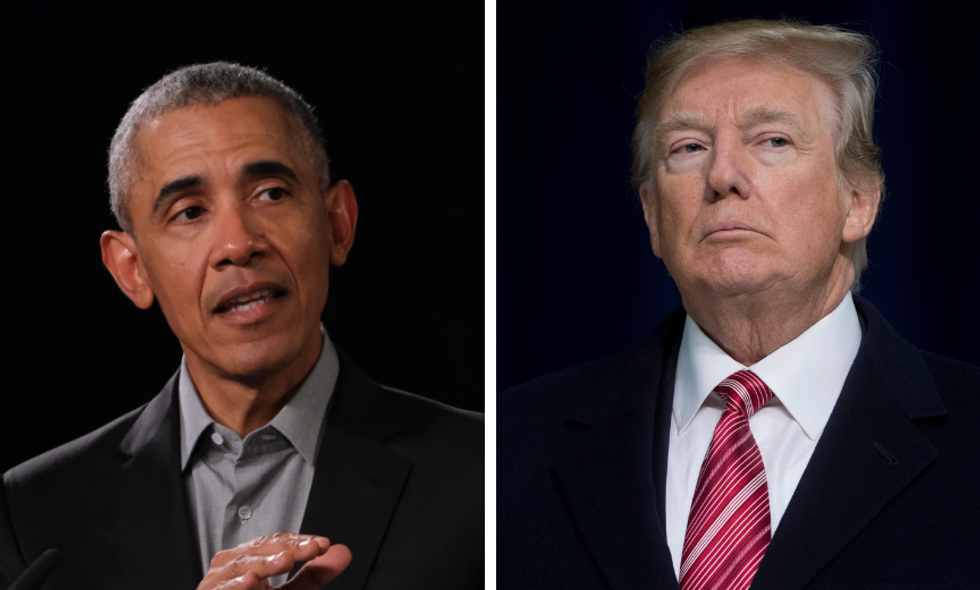 It's been 18 years since terrorists hijacked four planes, crashing them into the World Trade Center in New York, the Pentagon in Washington, and a remote field in Pennsylvania. Three thousand people died that day, and even more died as a result of illnesses contracted as a result of the actions.

Since the early years of then-President George W. Bush's tenure in the White House, Americans have looked to the President for wisdom and leadership as each anniversary of the attacks passes.

President Donald Trump commemorated the occasion on Twitter by posting a picture of himself and First Lady Melania Trump at the memorial site for Flight 93—the only hijacked plane not to reach its target that day, thanks to an uprising from passengers.

The image Trump shared read "WE WILL NEVER FORGET."

To which George Conway remarked:

Trump, of course, quickly did forget, switching gears to rage about an unfavorable poll.

In a hypothetical poll, done by one of the worst pollsters of them all, the Amazon Washington Post/ABC, which predi… https://t.co/4rzAjxXKWq
— Donald J. Trump (@Donald J. Trump) 1568203978.0

....This is a phony suppression poll, meant to build up their Democrat partners. I haven’t even started campaigning… https://t.co/wSiokMjuVd
— Donald J. Trump (@Donald J. Trump) 1568203978.0

It's not necessarily surprising behavior from the Commander in Chief, but on 9/11?

Obama highlighted a volunteer day of service on Ellis Island, which historically welcomed many of America's immigrants. He called for Americans to remember "the spirit of unity and togetherness" demonstrated in the weeks after the horrific attack.

People couldn't help but notice the stark difference between the two commemorations.

@BarackObama @realDonaldTrump - THIS is how you remember a solemn day. Learn. #BeBetter #neverforget
— MargaretMG (@MargaretMG) 1568207144.0

Trump has repeatedly claimed that he was one of the first people to arrive at Ground Zero. On the morning of the attacks, he infamously bragged that he had the tallest building in New York after the towers fell. During the 2016 campaign, he falsely claimed that thousands of the "heavy Arab population" in New Jersey applauded the attacks.

Most recently, Trump planned to host leaders of the Taliban—who harbored the architect of 9/11, Osama bin Laden—at Camp David in an effort to end the war in Afghanistan.