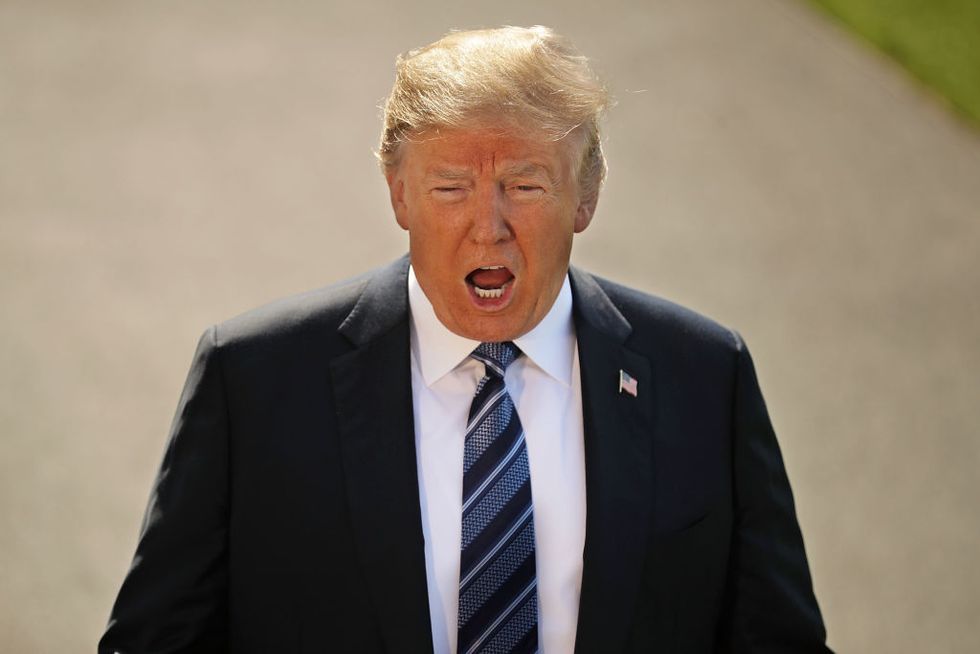 WASHINGTON, DC - MAY 25: U.S. President Donald Trump talks to members of the news media before departing the White House May 25, 2018 in Washington, DC. (Photo by Chip Somodevilla/Getty Images)

President Donald Trump claimed early this morning that the Russia investigation “will be MEDDLING with the mid-term elections” in November, suggesting that special counsel Robert Mueller's probe intends to torpedo the GOP's chances of consolidating their power in Congress.

The president has long claimed that Mueller's investigation is politically motivated.

"The 13 Angry Democrats (plus people who worked 8 years for Obama) working on the rigged Russia Witch Hunt, will be MEDDLING with the mid-term elections, especially now that Republicans (stay tough!) are taking the lead in Polls," Trump tweeted. "There was no Collusion, except by the Democrats!"

“Why aren’t the 13 Angry and heavily conflicted Democrats investigating the totally Crooked Campaign of totally Crooked Hillary Clinton,” Trump wrote in a follow-up post. “It’s a Rigged Witch Hunt, that’s why! Ask them if they enjoyed her after election celebration!”

In another tweet, the president suggested the investigation is a distraction from "North Korea Nuclear, bad Trade Deals, VA Choice, the Economy, rebuilding the Military."

The president did not provide any proof for his claims. Although outlets such as CNN have reported that several members of Mueller's team have donated to Democrats, the investigation into Russian meddling is a thoroughly bipartisan one and has also been the subject of several Republican-led Congressional inquiries.

Mueller himself is a Republican who was appointed as FBI director by former President George W. Bush. Deputy Attorney General Rod Rosenstein, the man who appointed Mueller, was appointed by President Trump.

The president has also taken to issuing tweets which consist of quotes from writers who've signaled their support for him––and their disdain for Mueller's investigation.

In one tweet, for example, the president quoted Fox News commentator Mollie Hemingway, who stated, rather erroneously, that the Obama administration gathered information to spy on the Trump campaign during the 2016 election, an attempt to lend credence to what he and his most vociferous defenders have referred to as "Spygate."

“This investigation involved far more surveillance than we ever had any idea about. It wasn’t just a wiretap agains… https://t.co/M1ie7TiTdS
— Donald J. Trump (@Donald J. Trump) 1527590963.0

Trump also quoted Turley to blast Sally Yates, the former Deputy Attorney General whom he fired after she refused to sign off on his highly controversial travel ban.

“Sally Yates is part of concerns people have raised about bias in the Justice Dept. I find her actions to be really… https://t.co/sALSMsxBPf
— Donald J. Trump (@Donald J. Trump) 1527516536.0

None of that is true, however. Trump's claims of a "criminal deep state" element are unconfirmed and unfounded. His claims, critics say, have done little but erode public trust in institutions.

The effect on the life of the nation of a president inventing conspiracy theories in order to distract attention from legitimate investigations or other things he dislikes is corrosive. The diabolical brilliance of the Trump strategy of disinformation is that many people are simply going to hear the charges and countercharges, and decide that there must be something to them because the president of the United States is saying them.

The Times notes that the effects of the president's claims were "evident" in Washington last week:

The effects were evident in Washington on Thursday, when the Justice Department held a pair of unusual briefings with lawmakers to share sensitive information about the special counsel investigation into Russia’s meddling in the 2016 election and whether the Trump campaign worked with Moscow to sway the contest. Those sessions came about because the president publicly hectored the department to cough up information about an F.B.I. informant he branded a political spy against him.

But Mr. Trump’s willingness to peddle suspicion as fact has implications beyond the Russia inquiry. It is a vital ingredient in the president’s communications arsenal, a social media-fueled, brashly expressed narrative of dubious accusations and dark insinuations that allows him to promote his own version of reality.

The president's suggestion that Mueller plans to meddle in the upcoming midterm elections comes amid reports that more than 40 Republicans have left or announced they plan to leave the House by the end of the year, undercutting the GOP's Congressional majority.

Thomas Garrett (R-VA) is the latest Republican to announce his departure. Garrett announced yesterday that he is an alcoholic and that he has ended his re-election campaign to seek treatment.