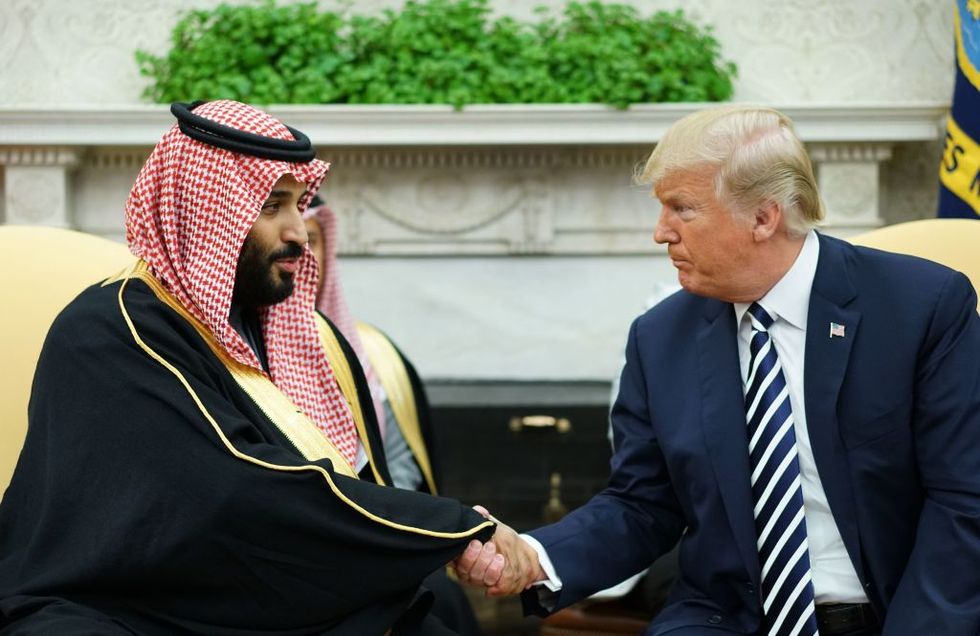 The president was immediately criticized for his statements. His words, for many, served as an example of his unwavering support for Saudi Arabia amid outrage over Crown Prince Mohammed bin Salman's role in ordering the murder of Washington Post columnist Jamal Khashoggi. Others pointed out that the president's claim about oil prices is, in fact, misleading.

@realDonaldTrump I'd like to say that you lying about oil economics to try to justify a murder and dismemberment is… https://t.co/Mgnz2eA5kU
— JRehling (@JRehling) 1542815442.0

@realDonaldTrump Translation: My family and the Kushner family get tens of millions from Saudi Arabia, if they want… https://t.co/wIRjpusRKG
— Bruno Amato (@Bruno Amato) 1542814860.0

@realDonaldTrump Bullshit as usual. We get far more oil from Latin America and Canada than Saudi. Hell, we produce… https://t.co/BbQpFHwpoN
— Madmama (@Madmama) 1542816050.0

@realDonaldTrump Shouldn't we be thanking ourselves, not a regime of "royals"? We just switched to "winter blend" g… https://t.co/Ne41aTKkiT
— Cyndy Stachowiak (@Cyndy Stachowiak) 1542815034.0

@realDonaldTrump Who cares that they ordered an assassination, so long as I can get my fuel for cheaper! And while… https://t.co/0IrgAfv6iN
— Nathan Bowling (@Nathan Bowling) 1542815892.0

Saudi Arabia had initially denied any involvement in Khashoggi’s disappearance but claimed via state media last month that Khashoggi, a Washington Post columnist, had been strangled in a fistfight with 15 men sent to confront him at the Saudi consulate in Turkey. The kingdom blamed some of the crown prince’s inner circle for the murder, and several high-ranking officials were dismissed if not detained outright.

One of those sources described the officer as close to the inner circle of Crown Prince Mohammed bin Salman. It is unclear whether the crown prince authorized an interrogation, abduction or killing. Several officials CNN spoke with said the mission could not have happened without the direct knowledge of the 33-year-old crown prince, the kingdom’s de facto ruler, who is known by his initials “MBS.”

A second source said the officer assembled and sent his own team to interrogate Khashoggi. They suspected Khashoggi of having ties to the kingdom’s arch rival, Qatar, the source said. There has been no evidence to substantiate Khashoggi had such ties.

Another source told CNN the mission’s organizer was not transparent about what he told Riyadh, which, the source said, explained why the government had no clear information for days.

A Turkish official told the network that Khashoggi’s body was cut into pieces after he was killed.

Yesterday, however, the president, in a 649-word-statement, there was “nothing definitive” linking the Crown Prince to the murder.

“Our intelligence agencies continue to assess all information, but it could very well be that the crown prince had knowledge of this tragic event – maybe he did and maybe he didn’t!" the president said. "That being said, we may never know all of the facts surrounding the murder of Mr Jamal Khashoggi. In any case, our relationship is with the Kingdom of Saudi Arabia.”

The president's response to the scandal has been criticized as largely ineffectual.

The president initially told Washington Post reporters that “obviously there’s been deception, and there’s been lies” regarding Khashoggi’s killing. But he also said Saudi Arabia is “an incredible ally” and pushed back against assertions that Crown Prince Mohammed bin Salman had ordered Saudi operatives to kill the reporter.

Trump characterized Saudi Arabia’s explanation for Khashoggi’s killing as “credible,” but defended his son-in-law Jared Kushner’s close relationship with the crown prince amid concerns that it had become a liability for the White House.

“They’re two young guys. Jared doesn’t know him well or anything. They are just two young people. They are the same age. They like each other, I believe,” Trump said.

The president also shot down the possibility that the scandal would disrupt U.S.-Saudi arms sales.

“It’s the largest order in history,” Trump said. “To give that up would hurt us far more than it hurts them. Then all they’ll do is go to Russia or go to China. All that’s doing is hurting us.” He added: “With that being said, something will take place,” though he did not elaborate as to what those actions might be.