Donald Trump, Jr. Wrote a Glowing Review of Kanye West's New Album and It Did Not Go Well 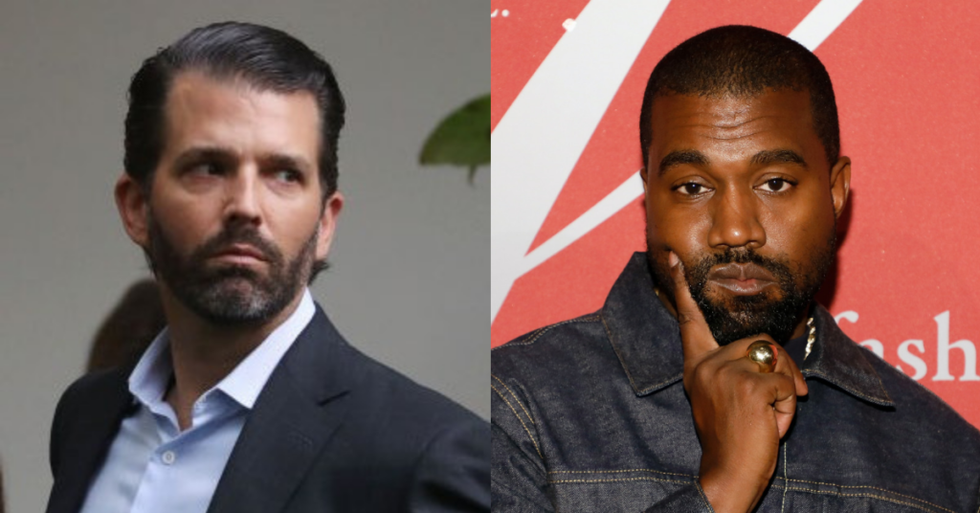 It comes after an erratic period for the rapper once diagnosed with bipolar disorder—West later denied the diagnosis and need for treatment. West waved a MAGA hat claiming he redesigned it, made declarations about President Donald Trump and had a bizarre Oval Office visit.

This was followed by West disavowing some of his statements and saying he was used by right wing pundit Candace Owens and others. At the time, Trump drew criticism for exploiting someone who appeared mentally unstable.

But West has now embraced Christianity, eschewed profanity and condemned premarital sex. Unfortunately, despite this, the reviews are not great for Jesus is King.

Unless your last name is Trump.

While Rolling Stone, Pitchfork and other industry insiders panned the album, Donald Trump Jr. declared it "the epitome of fearless creativity and ‘dangerous, unapproved’ ideas."

Why Trump Jr. put quotes around words only he used to describe mainstream Christianity—dangerous and unapproved—was unclear. But many wondered if he was trying to get the band back together with false flattery.

Trump Jr. went on to declare:

Then, as with most things, tried to make it about himself and his father.

"Leftists always try to silence those who are speaking truth. They’re waging a war on our family and culture."

Leading up to the 2020 election, the Trump campaign will try to crack the African-American voter code that support from Candace Owens and Diamond & Silk have failed to do. But some suggest the attempts are little more than pandering.

Others disagreed with the assessment.

@DonaldJTrumpJr @kanyewest lmao since when were ideas relating to Christianity ever considered "dangerous and unapp… https://t.co/2mEMyIAegH
— katie (@katie) 1572346727.0

Some felt the endorsement only proved the album had quality issues.

@DonaldJTrumpJr @IvanRapoport @kanyewest After don Jr. Has to go to bat for you https://t.co/ddUrEgWxOa
— Mathew Leathers (@Mathew Leathers) 1572314679.0

Others had difficulty believing Trump Jr. was a big fan.

Early sales projections for the album are on par with West's previous work. But if sales dip, perhaps Trump Jr. can put in a good word with Vice President Mike Pence, Betsy DeVos and other Evangelical members of the Trump administration.

The album review probably will not attract votes for his father, but it could bring a whole new audience to Kanye West.

The book Dumpty: The Age of Trump in Verse by actor John Lithgow is available here.