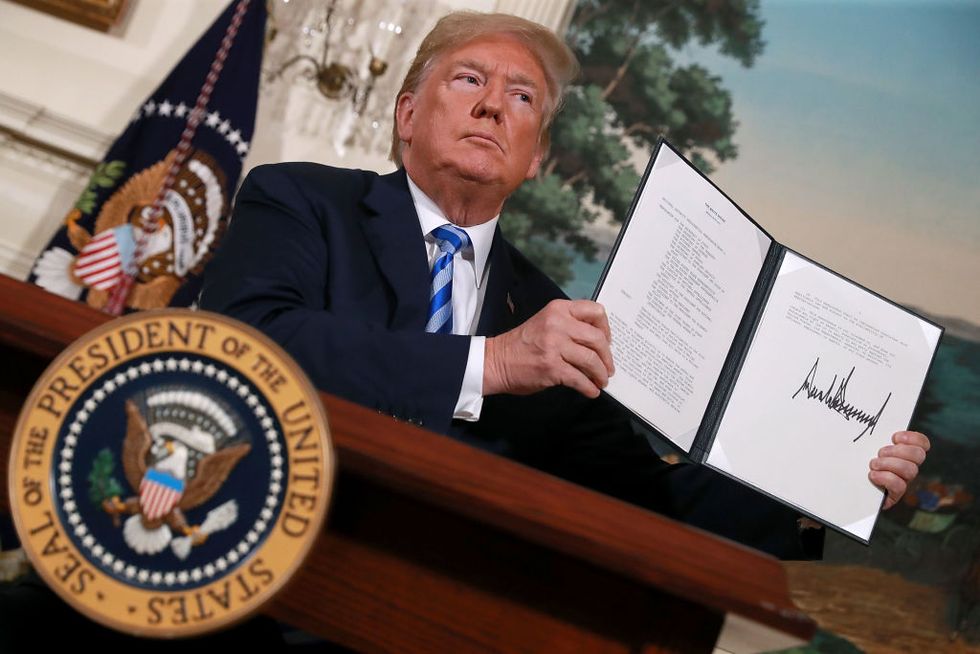 WASHINGTON, DC - MAY 08: U.S. President Donald Trump holds up a memorandum that reinstates sanctions on Iran after he announced his decision to withdraw the United States from the 2015 Iran nuclear deal in the Diplomatic Room at the White House May 8, 2018 in Washington, DC. After two and a half years of negotiations, Iran agreed in 2015 to end its nuclear program in exchange for Western countries, including the United States, lifting decades of economic sanctions. Since then international inspectors have not found any violations of the terms by Iran. (Photo by Chip Somodevilla/Getty Images)

"It is clear to me that we cannot prevent an Iranian nuclear bomb under the decaying and rotten structure of the current agreement," Trump said from the White House Diplomatic Room. "The Iran deal is defective at its core. If we do nothing we know exactly what will happen."

Trump had long campaigned against the nuclear deal and made exiting the agreement one of the signature pledges of his candidacy during the 2016 presidential election. He noted that any nation that helps Iran obtain nuclear weapons would also be "strongly sanctioned."

"This was a horrible one-sided deal that should have never, ever been made," the President said. "It didn't bring calm, it didn't bring peace, and it never will."

The president had earlier criticized the deal as one of the Obama administration's "worst" decisions, and in his statements, he expressed his belief that the deal served to benefit the Iranian regime while sponsoring terrorism.

"At the point when the US had maximum leverage, this disastrous deal gave this regime -- and it's a regime of great terror -- many billions of dollars, some of it in actually cash -- a great embarrassment to me as a citizen," Trump said.

It didn't take long for Tehran to respond. The Associated Press reports that the Iranian president said that should negotiations fail, "the Islamic Republic will enrich uranium 'more than before ... in next weeks."

The president's move earned a harsh rebuke from numerous political figures, particularly those who helped negotiate the deal.

Ending the United States's participation in the nuclear deal "will have a devastatingly chilling effect on any kind of economic activity" between Europe and Iran," said Tony Blinken, former deputy secretary of State under former president Barack Obama.

Robert Einhorn, a former arms control official at State under Obama's first Secretary of State, Hillary Clinton, observed that it will take time to redevelop the "regulatory scheme" required should the United States decide to reimpose sanctions.

Marie Harf, a political commentator for Fox News who worked as the Senior Advisor of Strategic Communications to former Secretary of State John Kerry and led the Iran nuclear negotiations communications strategy, criticized the president's move, observing that "saying it [that the United States will exit the deal] doesn't just make it so."

Harf noted, in particular, that the president only condemned the deal, and never offered a course of action going forward:

I thought what was interesting was that Donald Trump said a lot about what he didn't like in the deal. He said a lot about how bad Iran's behavior is, and he said very little about what comes next, and how he will actually work to fix the deal, whether he has a comprehensive plan in place, and he almost made an implicit military threat when he said, 'If Iran moves in a direction we don't want them to, they will face a problem like they've never seen before.'

So for a lot of us, the question facing the president today wasn't whether or not we should have done the deal originally. We know how he feels about that. It's what the best course is moving forward, and if tomorrow Iran kicks out the inspectors, if they restart their enrichment because now we have made the deal null and void, what will Donald Trump do? We did not hear details about how he will prevent Iran from getting a nuclear weapon going forward, and I think it's incumbent upon him and his administration now to lay out their case for how they will do that.

Proponents of exiting the agreement have cited weaknesses that the leaders of France, Germany and Britain themselves have acknowledged and pledged to improve. These include:

French President Emmanuel Macron met with President Trump last month and urged Congress to not only stay in the deal, but seek to improve it. German Chancellor Angela Merkel and British Foreign Secretary Boris Johnson, in separate meetings with the president, also urged him to keep the deal, agreeing with the assessment from U.S. intelligence agencies and Secretary of State Mike Pompeo that the deal limits Iran's nuclear capabilities for now and that Iran has always complied.