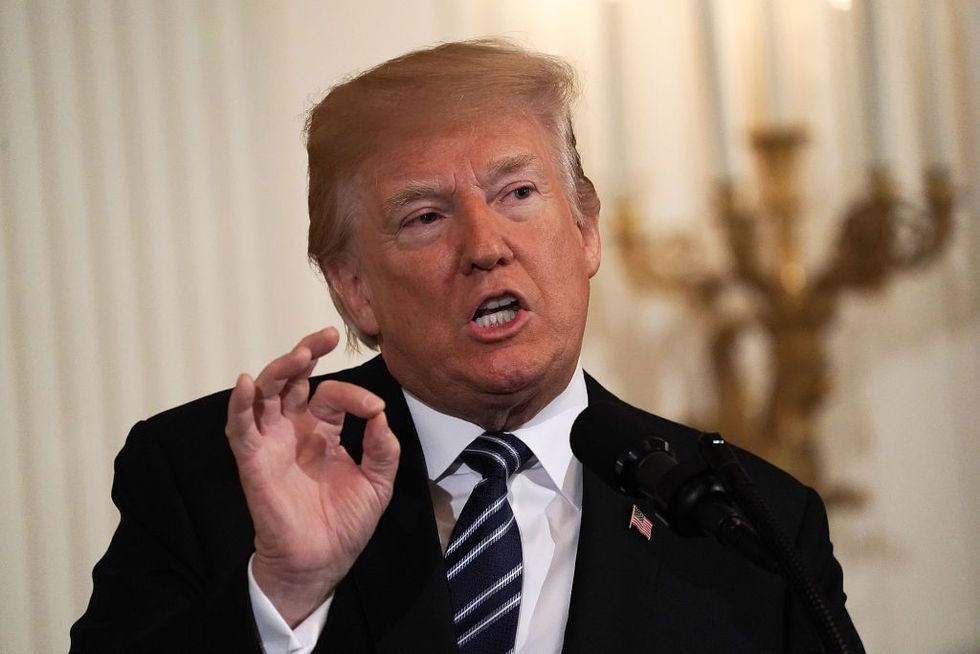 WASHINGTON, DC - MAY 18: U.S. President Donald Trump speaks at the East Room of the White House May 18, 2018 in Washington, DC. (Photo by Alex Wong/Getty Images)

The proposal would allow hunters to lure brown and black bears with bait, use dogs to hunt black bears, shoot bear cubs and wolf and coyote pups in their dens, hunt black bears and their cubs using artificial lights, and even shoot swimming caribou from motorboats.

Collette Adkins, a lawyer and biologist at the Center for Biological Diversity, says she is "outraged":

I’m outraged that [President Donald] Trump and his trophy-hunting cronies are promoting the senseless slaughter of Alaska’s most iconic wildlife. Cruel and harmful hunting methods like killing bear cubs and their mothers near dens have no place on our national preserves.

The Trump administration has somehow reached a new low in protecting wildlife. Allowing the killing of bear cubs and wolf pups in their dens is barbaric and inhumane. The proposed regulations cast aside the very purpose of national parks to protect wildlife and wild places.

The Humane Society of the United States called the proposal “a misguided attempt to increase trophy hunting opportunities.”

Wilderness Watch urged their followers to write the Trump administration to express disapproval.

The group also assailed Interior Secretary Ryan Zinke. Zinke "has made it his mission to destroy America's Wilderness," the group wrote.

One person who's right in the middle of these schemes is Trump's Interior Secretary Ryan Zinke, who has made it his… https://t.co/IOXezLCpyB
— Wilderness Watch (@Wilderness Watch) 1526514000.0

In 2015, the park service, one report notes, "said that certain hunting practices mess with predator-prey dynamics and upset the balance for harvest purposes, while causing problems for public safety."

The state disputed that assessment, the park service said.

The State also maintains that any effects to the natural abundances, diversities, distributions, densities, age-class distributions, populations, habitats, genetics, and behaviors of wildlife from implementing its regulations are likely negligible.

The first, Order 3347, "urged expanded access to hunting and fishing on public lands and better consultation with state wildlife management."

The proposal comes over a year after Congress approved legislation to repeal an Obama-era rule that protected wolves and bears on Alaska wildlife refuges.

Although the rule deals specifically with non-subsistence predator control, that did not stop Senator Dan Sullivan (R-Alaska), who characterized the rule as an example of federal overreach, from speaking about Alaska's subsistence hunting and fishing.

“You might prefer your meat wrapped in cellophane at the grocery store. That’s fine,” he said at the time. “But I ask that you don’t criticize the thousands of Alaskans who have to hunt for their food and who value hunting as a deep part of their culture.”