Donald Trump Calls Reports That North Korea Is Deceiving the U.S. 'Fake News' But Fox News Has the Receipts 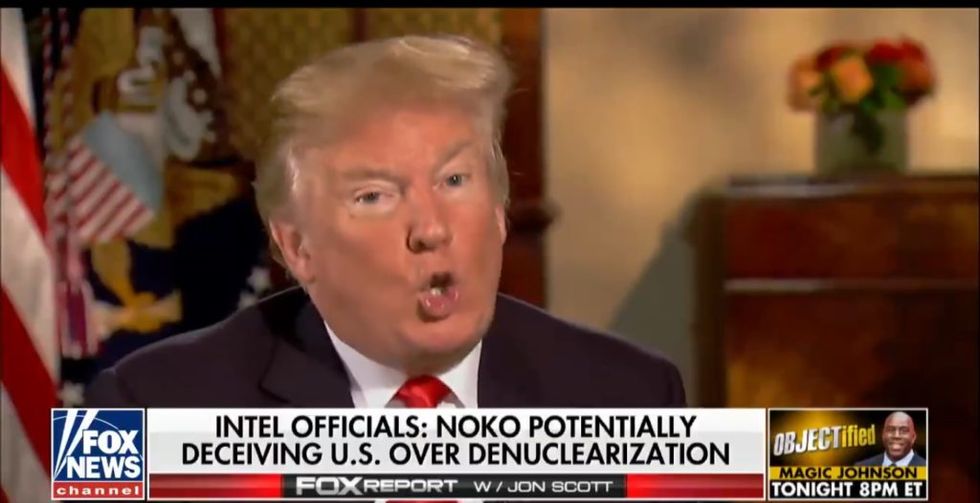 In the wake of Donald Trump's summit with Kim Jong Un in Singapore on June 12th, Trump famously proclaimed on Twitter that North Korea was "no longer" a threat to the United States and urged us all to "sleep well tonight."

Well, since then, multiple reports have emerged that North Korea is not, in fact, denuclearizing, rather Kim is ramping up his weapons program.

Not surprisingly, the President has tried to swat such reports away, including in an early morning tweet today:

But what might be more surprising is that even Fox News reported that U.S. intelligence officials believe North Korea has actually upped its production of enriched uranium and is orchestrating weapon production at secret sites.

"There is absolutely unequivocal evidence that they are trying to deceive the U.S.,” one of the sources said. The @FoxNews Twitter account even declared:

U.S. intelligence officials believe North Korea has been deceiving the U.S. when it comes to their nuclear program.

Which Representative Ted Lieu (D-CA) reminded us with this tweet earlier today:

Dear @realDonaldTrump: You stated the recent reports about North Korea deceiving you were coming "only" from "the O… https://t.co/N3MmWWNaqD
— Ted Lieu (@Ted Lieu) 1530626929.0

Lieu wasn't the only one reminding Trump that yes, even Fox News was reporting this as fact:

If this is true, it comes at a heavy cost. In a controversial move, Trump agreed to end the United States' joint military exercises with South Korea. The exercises have long been a source of North Korean animus toward the two countries during previous administrations as well as a reassurance to South Korean allies.

This doesn't come as a surprise to many. While North Korea did seem to pledge eventual denuclearization, the agreement signed did not specify plans for inspections or other logical steps to verify that North Korea would indeed keep its word.

@FoxNews @GillianHTurner Oh my goodness Fox news is so slow. The ought to rename themselves turtle news
— RondaRL (@RondaRL) 1530485202.0

Trump has since tweeted about Iran, Harley-Davidson, and the NSA. Somehow, he hasn't had the chance to get back to Congressman Lieu.

Trump has consistently said the agreement was substantive, but Americans don't seem to have much faith.

@realDonaldTrump Congratulations on not entering the war that you almost started with your Twitter account.
— Jemaine Clement (@Jemaine Clement) 1530619517.0

@realDonaldTrump This is the best one of his loony tweets today. Despite verified reports that NK is continuing the… https://t.co/0gxb0DJ0mI
— Charles Johnson (@Charles Johnson) 1530643526.0

A new spin on the legitimacy of the agreement is sure to come. It's hard to say whether or not, even when faced with facts, Trump will concede that the agreement needs to be strengthened beyond the assurance of smiles and handshakes.