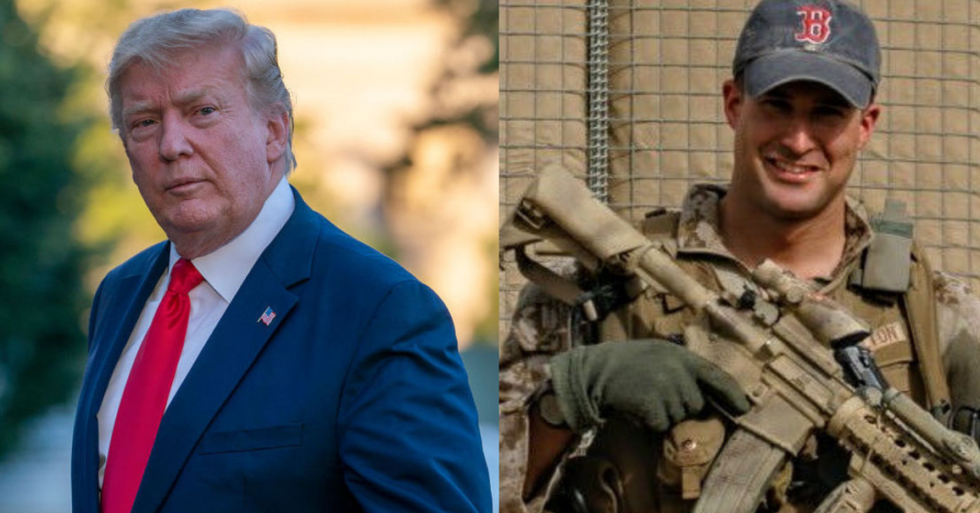 As the Dow Jones Industrial Average continued to plummet—down another 623 points as of 5:10pm Friday—President Donald Trump looked to make light of the situation while taking a jab at a former Democratic presidential candidate.

Trump—who spent most of his presidency to date trading on the economic upturn created by President Barack Obama to indicate his own success—took to Twitter Friday afternoon and posted:

"The Dow is down 573 points perhaps on the news that Representative Seth Moulton, whoever that may be, has dropped out of the 2020 Presidential Race!"

Most economists blame the Dow's drop on the trade wars Trump chose to start with most of the United States' trading partners and the GOP's massive tax cuts to corporations and the wealthy—while removing exemptions and deductions for the middle class. Also not helping was another Trump tweet "hereby ordering" companies to find alternatives to China.

Some cited an even more nefarious purpose to the President posting tweets with the potential to drop the Dow.

As for Trump's attempted joke, if the President truly did not know who Massachusetts Democratic Representative Seth Moulton was, he quickly got an education.

@4everNeverTrump @realDonaldTrump Where the information came from is not important, what's important is he research… https://t.co/3oRxczyYgA
— John Peddle (@John Peddle) 1566591069.0

@realDonaldTrump I thought you loved the military. Moulton served our country, unlike you. #FakeBoneSpurs
— Hillary Won (@Hillary Won) 1566596962.0

Moulton may be familiar to many online after his response to the Orlando nightclub shooting in 2016 where a man with a semi-automatic rifle and pistol murdered 49 people and injured 53 more.

People called Trump out for once again insulting a veteran.

@bratknits @JoyceWhiteVance Sadly...yes...this is how he talks about vets, treats vets, and takes benefits from vets.
— Stephen Elpop (@Stephen Elpop) 1566588878.0

In addition to the attack on United States Marine Corps veteran Moulton, people found jokes about the failing economy distasteful.

@realDonaldTrump Causes a plunge in the Dow, then uses it to attack Democrats. Cool.
— Charles Johnson (@Charles Johnson) 1566587056.0

@Green_Footballs @realDonaldTrump I don't even understand what the attack is. I know it's bullying Moulton somehow,… https://t.co/jBrM6KAofO
— slakmehl (@slakmehl) 1566587399.0

Although one person thought the attempted online bullying of Representative Moulton had another reason.

Trump previously tried to blame the faltering economy on the media.

Moulton did not respond to the President's insults. Instead he focused on those who helped with his campaign...

Running for president with you behind me was one of the greatest honors of my life. Thank you for everything. https://t.co/cfLhb7aoH3
— Seth Moulton (@Seth Moulton) 1566584929.0

...and helping his fellow veterans.

Millions of Americans deal with post-traumatic stress. I’m one of them. We have to improve access to and quality o… https://t.co/ldoD7hYr4L
— Seth Moulton (@Seth Moulton) 1566506245.0

Representative Seth Moulton may be out of the presidential race, but the 2020 election will determine a direction for the future.

This shirt is available here to show support for change.