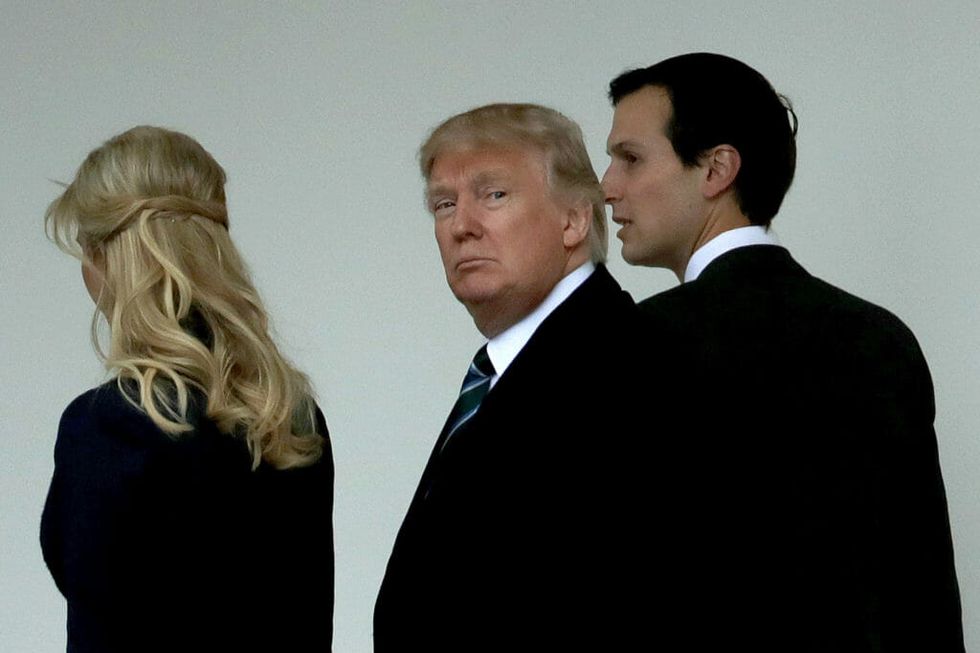 WASHINGTON, DC - MARCH 17: U.S. President Donald Trump (C) walks along the West Wing colonnade with his daughter Ivanka Trump (L) and his son-in-law and Senior Advisor to the President for Strategic Planning Jared Kushner before he departs the White House March 17, 2017 in Washington, DC. The first family is scheduled to spend the weekend at their Mar-a-Lago Club in Palm Beach, Florida. (Photo by Chip Somodevilla/Getty Images)

President Donald Trump blames Jared Kushner, his senior adviser who is also his son-in-law, for the escalating Mueller probe. Trump vented his frustrations about Kushner in conversations with his former chief strategist, Stephen Bannon, and his longtime adviser Roger Stone, according to a source briefed on both phone calls who spoke to Vanity Fair.

The source says during his conversation with Bannon "Trump blamed Jared Kushner for his role in decisions, specifically the firings of Mike Flynn and James Comey, that led to Mueller’s appointment."

Trump fired Comey, the former FBI director, in May, and his action ultimately led the deputy attorney general to appoint Robert Mueller, the special counsel who earlier this week announced authorities have charged former Trump campaign chairman Paul Manafort and his longtime business partner Rick Gates with 12 counts of “conspiracy against the United States, conspiracy to launder money, unregistered agent of a foreign principal, false and misleading FARA statements, false statements, and seven counts of failure to file reports of foreign bank and financial accounts.”

Bannon also advised the president to "shake up his legal team" by installing a lawyer above White House attorney Ty Cobb. “Mueller shouldn’t be allowed to be a clean shot on goal,” a Bannon confidant told Vanity Fair. “He must be contested and checked. Right now he has unchecked power.”

When speaking to Stone, Trump agreed that "Kushner was giving him bad political advice." Stone believes defunding Mueller's investigation would not be enough to kill the probe. Stone wants the president to "call for a special prosecutor to investigate Hillary Clinton’s role in approving the controversial Uranium One deal," which allowed a Russian energy firm to acquire a Canadian mining company that controlled "a large subset" of the uranium in the United States.

According to Stone, a special prosecutor investigating Uranium One would inevitably need to investigate the FBI's role in approving the deal, which would make Mueller a target, as he was in charge of the bureau at the time the deal was approved.

“You would immediately have to inform Mueller, Comey, and [Deputy Attorney General] Rod Rosenstein that they are under federal investigation,” Stone said. “Trump can’t afford to fire Mueller politically. But this pushes him aside.”

Sam Nunberg, a former Trump campaign aide who also spoke to Vanity Fair, is no fan of Kushner either.

"Jared is the worst political adviser in the White House in modern history," Nunberg said. "I'm only saying publicly what everyone says behind the scenes at Fox News, in conservative media, and the Senate and Congress."

The White House did not respond to a request from Vanity Fair for comment.