Donald Trump Just Backtracked on His Claim That He Was 'Not Happy With' His Crowd's 'Send Her Back' Chants, and Here We Go Again 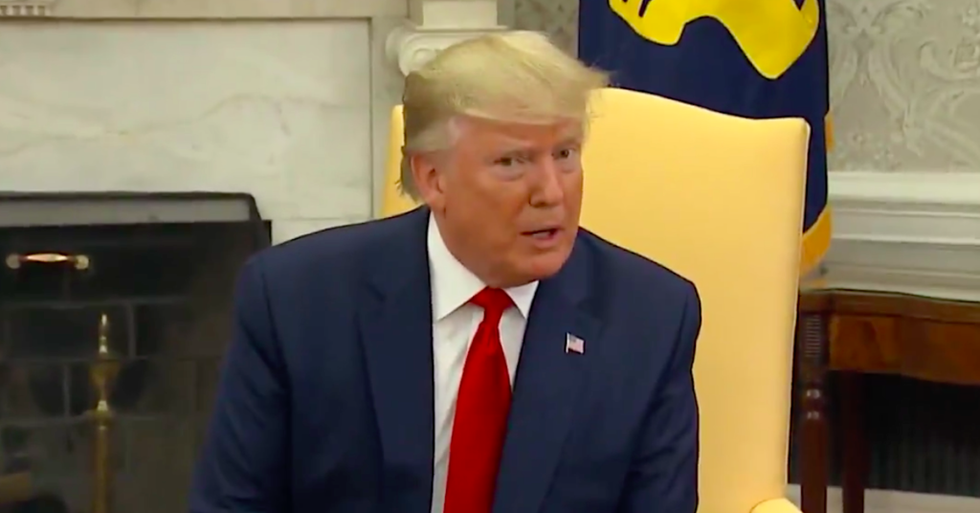 Facing backlash after a series of racist tweets on Sunday, President Donald Trump went on to a MAGA rally in Greenville, North Carolina that drew even further criticism after his crowd chanted "Send Her Back" and Trump just basked in it, doing nothing to quiet the mob.

Faced with the backlash, the President initially condemned the chants of "send her back" targeting Minnesota Democratic Representative Ilhan Omar. But as he has before, Trump later backtracked on saying the right thing during an off the cuff press gaggle in the Oval Office.

By Friday, when the press asked about the chants, the President changed his tune. In a move reminiscent of his reaction to White supremacist violence in Charlottesville that left one woman dead and others injured, Trump defended the "very fine people" in his rally crowd.

A day after Pres Trump disavowed "send her back chants" heard in N.C, he is now saying the people who chanted are g… https://t.co/nGLMcO1QTC
— Yamiche Alcindor (@Yamiche Alcindor) 1563555563.0

He also clarified what he's REALLY "unhappy" about, in the process, smearing the congresswomen with false claims yet again.

Full transcript of President Trump backtracking on "send her back chants." "I'm unhappy with the fact that a congr… https://t.co/nH40Zzazw3
— Yamiche Alcindor (@Yamiche Alcindor) 1563556144.0

Here is the transcript of Trump's comments.

Not a whole lot has been learned on this front since 2016. Potus has history of backtracking over massive controver… https://t.co/7xUh2w3qIu
— Maggie Haberman (@Maggie Haberman) 1563557377.0

@Yamiche And I would easily wager at the next rally that they chant again and Trump does nothing to stop them, corr… https://t.co/BMNQqVd9uf
— AW Stiles (@AW Stiles) 1563555644.0

People noted Trump's claims of many, many statements by the Congresswomen he targeted, but he failed to produce any of those statements for the press.

The President has made similar boasts throughout his life—to give credence to his claims—but never produces his documentation.

@AhmedBaba_ Guaranteed that if you asked Trump what was said that was anti-Semitic he couldn’t answer. At most he m… https://t.co/dB7GraW9zA
— Gregory Karawan (@Gregory Karawan) 1563563719.0

People referenced the President's similar reaction to the violence in Charlottesville.

The 2020 election is 472 days away. Between now and then there will be many more rallies by President Trump.

Whether or not he will encourage or discourage racism and xenophobia during his MAGA rallies remains to be seen.

If you think the White nationalism and racist rhetoric has no place in United States' politics, you can make your views known with this hat, available here.