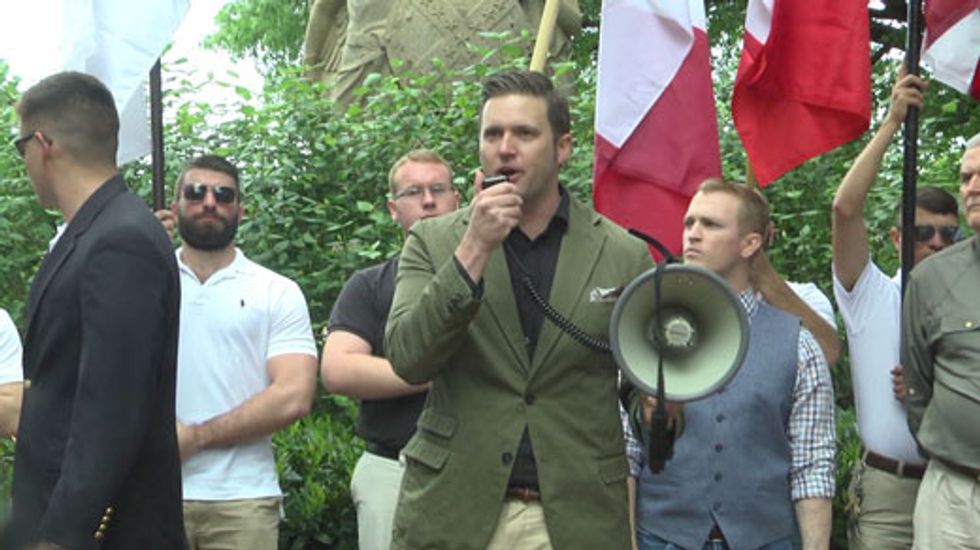 "What brings us together is that we are white, we are a people, we will not be replaced,” Spencer said at the afternoon protest. "You will not replace us. You will not destroy us. You cannot destroy us. We have awoken. We are here. We are never going away.”

At the evening rally, the demonstrators chanted "You will not replace us," "All white lives matter," the Nazi slogan "Blood and soil," and "Russia is our friend," in a display of support for President Donald Trump, who is currently the subject of a probe into whether Russian operatives interfered in last year's presidential election. Although Trump has denounced the alt-right, Spencer and his supporters credited the Trump insurgency's hard-line conservative stances on the Muslim refugee crisis, undocumented immigrants and political correctness for bolstering the movement.

The evening protest disbanded about ten minutes in after an altercation between Spencer’s group and counterprotesters drew the attention of police. According to the Charlottesville Police Department, the first officer on the scene found "100 to 150 people in the park many of whom were carrying tiki style torches." The officer, who called for additional units, ordered everyone to leave the park, and there were no assaults, injuries or damages to the park reported.

Charlottesville Mayor Mark Signer condemned the demonstration, noting that a court injunction has halted the removal of the statue for six months. He openly rebuked Spencer and his followers on Twitter.

@RichardBSpencer This garbage white supremacy won't even be a footnote in our history. #leave #resistance #welcomingcity.
— Mike Signer (@Mike Signer) 1494697852.0

I think it's horrific," Signer said of the protests when approached by ABC News. "We're a city that proudly values our diversity." He pointed out that the protest coincided with the park's Festival of Cultures event, which, according to the festival's website, celebrates the "cultural and linguistic diversity" of the local community. Signer said it was not clear if the timing of the protest was deliberate.

"It's always a balance about how much oxygen you want to give these alt-right bigots," Signer said when asked how to respond to Spencer and his followers. "It's important to say that these were just Tiki torches. Based upon what I'm seeing online, the people involved in this have a juvenile mentality and are beneath our contempt."

The statue of General Lee has become a rallying cry for Republican gubernatorial candidate Corey Stewart, who chaired President Trump's Virginia campaign until his dismissal. Stewart has vigorously defended the Confederate battle flag and monuments, taking a hardline stance against "political correctness" and "historical vandals."

“I am calling them out for who they are,” Stewart said in February. “It’s really a symptom of the problem of the left and their unwillingness to listen to alternative points of view.”

The four other contenders for governor, including Ed Gillespie, who is a former chair of the Republican National Committee, condemned the rallies as hateful and divisive.

“The ugly display of divisive rhetoric and intimidation tactics in Charlottesville yesterday . . . does not reflect the thoughtfulness and tolerance I see in my fellow Virginians everywhere I go,” said Ed Gillespie, who is a former chair of the Republican National Committee.

Said Sen. Frank W. Wagner (R-Virginia Beach), who will face Stewart and Gillespie in the June 13 GOP primary: “These actions are totally unacceptable. These people are racists. They don’t represent Virginia values. I condemn their actions and beliefs. I call on all Virginians who are involved in efforts to advocate for or against Virginia’s history to act responsibly and honorably.”

Those who participated in the demonstration said the condemnation and comparisons to white supremacists were unwarranted.

But some refused to take Richard Spencer or the protest seriously.

John Edwin Mason, a history teacher at the University of Virginia who lives within walking distance of Lee Park, said he spoke to neighbors who expressed neither surprise nor fear at the events.

"Nobody here is intimidated by these jokers," Mason said with a chuckle.