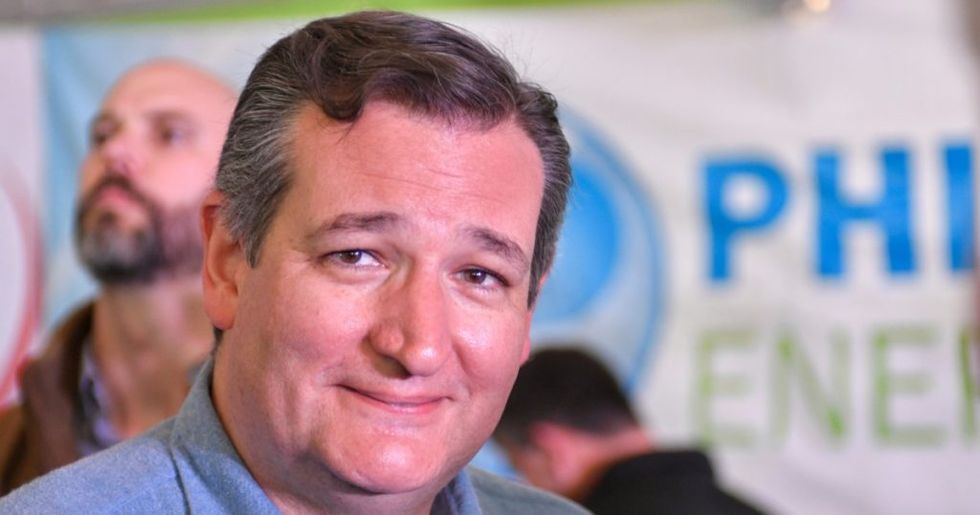 Senator Ted Cruz (R-TX) rallies for a change in the renewable fuel standard during a visit of the bankrupt refinery of Philadelphia Energy Solutions, in South Philadelphia, PA, on February 21, 2018. (Photo by Bastiaan Slabbers/NurPhoto via Getty Images)

The fundraising letter was packaged in a brown envelope with “SUMMONS ENCLOSED-OPEN IMMEDIATELY” plastered on the front. The return address reads "Official Travis County Summons."

"Received this for my 88-year-old grandma. Says it's a summons from Travis County, but is actually asking for money for @tedcruz," writes Sean Owen of Austin, Texas. "Did your campaign authorize this? Is this even legal? Shame on you. That's one more @BetoORourke voter."

Inside, recipients got what Owen described as a "normal campaign fundraising letter," asking for pledges to help reelect Cruz.

The mailer struck Owen as slimy, especially because it was addressed to his grandmother, whom he says has dementia.

"I am used to ignoring junk mail with URGENT or FINAL NOTICE written on it, but this fooled even me for a moment, as it plainly wants us to think it's from our county government when it isn't," Owen told Newsweek. "That's different, that's over the line. It made me mad because my grandmother suffered from some dementia, and could easily have followed the urgent request inside to send money."

People with elderly relatives came rushing to Owen's defense on Twitter, agreeing that the Cruz campaign is attempting to swindle vulnerable people.

An official within the Cruz campaign confirmed to Newsweek on Monday that they had, in fact, sent the mailer.

Wu cited a provision within the law that he believes Cruz violated.

"This is the very type of solicitation the law was intended to ban," Wu added.

This is the very type of solicitation the law was intended to ban. Ones that pretend to be from a government agenc… https://t.co/EddLAQVogg
— Gene Wu (@Gene Wu) 1537141156.0

Others also questioned the legality of Cruz's tactics.

If this looks at all familiar, it should. Cruz employed a similar strategy during his 2016 presidential bid.

A notice of "VOTING VIOLATION" was sent to Iowa voters ahead of their first-in-the-country caucus, warning would-be voters that their voting records are matters of public record.

"You are receiving this election notice because of low expected voter turnout in your area," it read. "Your individual voting history as well as your neighbors’ are public record. Their scores are published below, and many of them will see your score as well. CAUCUS ON MONDAY TO IMPROVE YOUR SCORE and please encourage your neighbors to caucus as well. A follow-up notice may be issued following Monday’s caucuses."

And have these mailers endeared Cruz with voters? Nope, definitely not.

Actually, the mailer appears to be backfiring.

O'Rourke, a progressive three-term Congressman representing El Paso, is within single digits of Cruz and could be the first Texas Democrat sent to the Senate in a generation. O'Rourke has raised $23,332,950 to Cruz’s $23,365,835 and does not accept corporate or PAC money.

The last Democrat to get elected to the Senate from Texas was Lloyd Bentsen, who became the 1988 vice presidential nominee and Treasury Secretary under President Bill Clinton in 1993. Bentsen was then replaced by Democrat Bob Krueger, who lost a special election to keep his seat to Republican Kay Bailey Hutchinson just weeks after his appointment.