George H. W. Bush Just Weighed In On Senator Collins' Brett Kavanaugh Decision, and People Are Not Having It 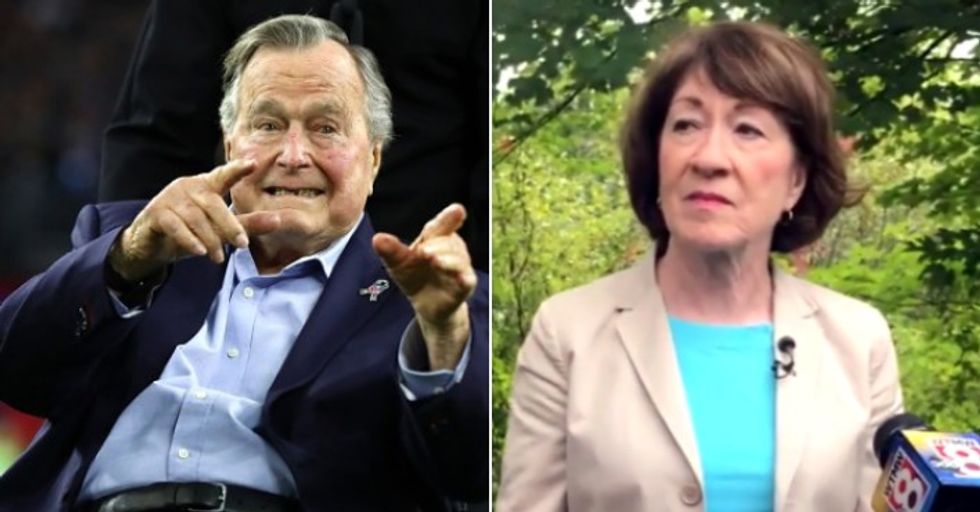 "The facts presented do not mean that…Professor Ford was not sexually assaulted that night or at some other time. But they do lead me to conclude that the allegations failed to meet the ‘more likely than not’ standard."

"The facts presented do not mean that…Professor Ford was not sexually assaulted that night or at some other time. B… https://t.co/IhuWfVLvir
— NPR Politics (@NPR Politics) 1538768993.0

Many online took exception to Collins' attacks against sexual assault survivors that she claimed she found credible, but 'mistaken' in identifying their attacker.

@nprpolitics @NPR I have a reasonable doubt as to his innocence, don't you? You would accept a job applicant with f… https://t.co/ufQt5yxHuu
— GREGORY BORGMAN (@GREGORY BORGMAN) 1538769686.0

However one prominent voice praised Collins for her stance in support of Trump's nominee. That man in 1992 gave Collins her first political appointment: President George H.W. Bush.

People had little positive feedback however for the former President's praise for his protege.

@GeorgeHWBush @maggieNYT @SenatorCollins That was NOT courageous. She sold us all out 😡
— Impudent Cat (@Impudent Cat) 1538771650.0

@GeorgeHWBush @SenatorCollins Just when I thought you might actually have a redeeming quality. Political courage a… https://t.co/DP4ehriqLk
— KellyW (@KellyW) 1538771405.0

A few referenced allegations the former President himself faced.

In 2017, six women accused the former President of groping them during photos. The President's spokespeople apologized, but stated it was an attempt at humor and a result of Bush's age and not sexual in nature.

Some also brought up Bush's own nominee, Justice Clarence Thomas.

The relationship between Collins and Bush goes back a number of years.

In 1992, sometimes Maine resident President Bush appointed Collins as the New England regional director for the Small Business Administration. The appointment only lasted until President Bill Clinton took office in 1993.

In 1994, Collins ran for Governor of Maine but came in third behind Democrat Joe Brennan and the winner, Independent Angus King. Her mentor, Cohen, went on to be appointed Secretary of Defense by Clinton from 1997-2001 and in 1996 with his endorsement, Collins ran for and won his vacated Senate seat.

While the media frequently describes Collins as a moderate based on her past voting record, pundits noted that record changed in 2017 after the Senator decided not to run for Maine Governor in 2018. In October of 2017, Collins announced her decision to remain in the Senate until the end of her term in 2020.

Collins has yet to officially announce her plans for 2020 and beyond.