The Architect of Donald Trump's Tax Cut Plan Is Now Blaming Democrats for Soaring Deficits, and People Can't Even 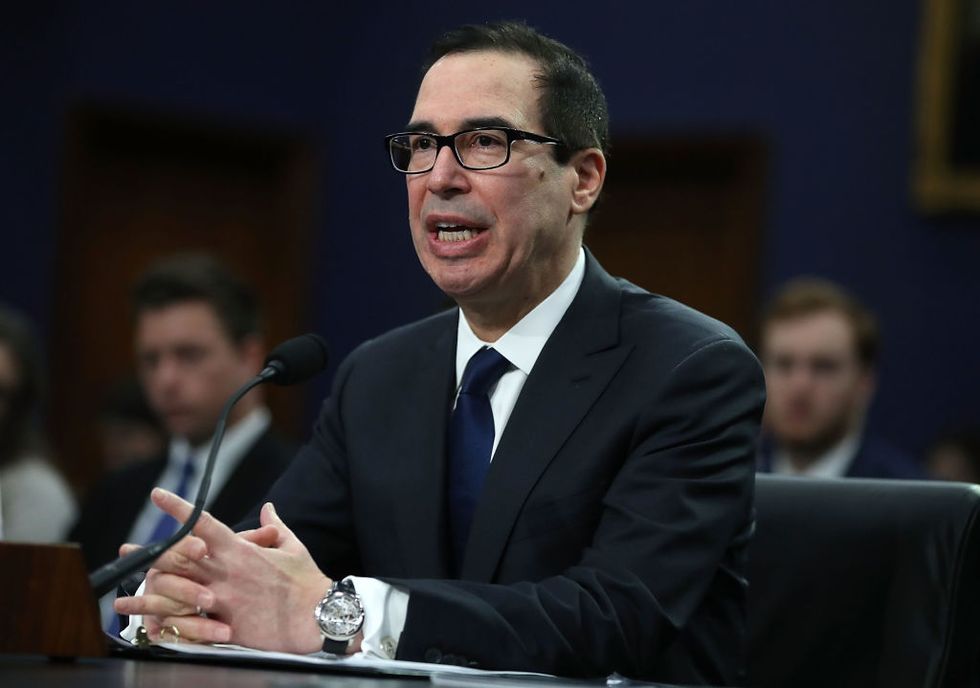 In an interview with CNN, Treasury Secretary Steven Mnuchin said Democrats are to blame for the ballooning deficit, which is expected to hit $1 trillion when official numbers are released next week, and placed specific blame on spending increases on health and education in exchange for military budget increases as part of a massive spending package President Donald Trump signed in September 2017 to avert a government shutdown.

"People are going to want to say the deficit is because of the tax cuts. That's not the real story," he said. "The real story is we made a significant investment in the military which is very, very important, and to get that done we had to increase non-military spending."

"If we could have approved that with 51 votes instead of 60 votes, we would not have spent as much money on non-military spending and the budget deficit would have been considerably smaller," he added.

Although Mnuchin declined to comment on details of the coming deficit numbers, he insisted: "We're on our way on growth, the tax bill will pay for itself and provide additional revenue."

Mnuchin was perhaps the biggest proponent of the much-criticized GOP tax cuts, which have cost the Treasury Department billions in revenue, and many objected to his version of events.

This little tactic of blaming Democrats for what Republicans are doing got old a long time ago. https://t.co/1OHHIHU8sx
— Michelle (@Michelle) 1539285895.0

@stevenmnuchin1 Certainly you understand that when you juice an already strong economy with huge tax cuts and enorm… https://t.co/kSua0HbbKc
— Joel (@Joel) 1539350924.0

Blaming Democrats for the tax plan is not a new talking point. President Trump himself has often blamed Democrats even though the Republican Party has control of Congress. He once claimed that “the only people” who don’t care for the tax proposal are those who “don’t understand” it and the “Obstructionist Democrats."

The president's comment came on the heels of a Quinnipiac University poll which found that 53 percent of U.S. voters disapproved of the Republican tax plan. That poll found that 64 percent of Americans believed that the plan, if passed, would benefit only the nation’s wealthiest citizens, while only 24 percent think the middle class would benefit. Just 5 percent believe the plan would benefit those in the lowest income bracket.

Last year, a troubling report from the nonpartisan Congressional Budget Office (CBO) revealed that the plan “gives substantial tax cuts and benefits to Americans earning more than $100,000 a year”––hitting the nation’s poorest citizens particularly hard––and that the legislation would “add an increase in the deficit of $1,414 billion over the next 10 years.”

In December 2017, Mnuchin came under fire after Senator Elizabeth Warren (D-MA) triggered an investigation over political meddling in the tax policy office after The New York Times and several other media outlets revealed that Mnuchin, in pitching the $1.5 trillion tax overhaul he says will bolster economic growth, has been citing a report that doesn’t exist.

Mnuchin had promised that the Treasury would release its analysis in full as the Senate prepared to vote on the first rewrite of the country’s tax code in three decades, and had said that over 100 people in Treasury are “working around the clock on running scenarios for us.”

The administration had yet to release any type of tax analysis, however, and those inside the Treasury’s Office of Tax Policy told reporters that they are not working on any analysis he has mentioned. In fact, an economist at the Office of Tax Analysis, who spoke to New York Times reporters on the condition of anonymity, said Treasury had not released a “dynamic” analysis indicating the tax plan will pay for itself with economic growth because one did not exist.