Snoop Dogg Just Went Off on Donald Trump and Kanye West in an F-Bomb Laden Rant, and People Are Cheering 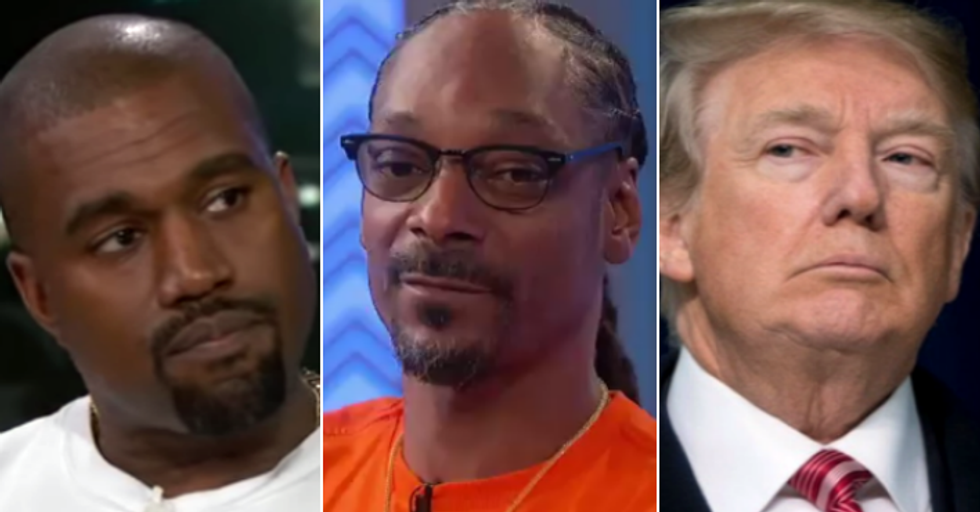 Like other rap artists before him, Calvin Cordozar Broadus, Jr.—better known by his professional name Snoop Dogg—expanded his resume beyond music. The rapper, singer, songwriter, record producer, television personality, actor and soon to be cookbook author now adds political commentator to that list.

In an appearance on the Sirius XM radio show Hip Hop Nation, host DJ Suss One began to broach the subject of President Donald Trump with his guest Snoop Dogg. DJ Suss One apologized, then retracted his apology stating:

"All right, now politics real quick now. We all here now—I apologize—naw, I really don't apologize man, because a lot of my fans get mad at me when I talk bad about him, but I don't. I think it's safe to say most people in our culture do not..."

When DJ Suss One indicated he would not go so far, Snoop Dogg reasserted:

"He drew the motherf***ing lines. Before him, there were no lines. Everybody was everybody. We respected everything; we didn't trip. But n***a, when you drew the line and start pointing motherf***rs out and singling them out, f*** y'all n***a. You and them."

"Yeah, that's how I feel," DJ Suss One replied, "if you're just tuning in..." Snoop Dogg interjected again to state:

"Well," DJ Suss One said, "this is what I was gonna say about that. I was going to bring up Kanye."

"Yeah," Snoop Dogg agreed, "throw him in the bag too 'cuz he right with them motherf***s."

Then the show host said he needed to ask about Snoop Dogg's appearance at the 2011 Comedy Central Roast of Donald Trump. The rapper stated he was there roasting Trump and getting paid. Seth MacFarlane, another frequent critic of President Trump, hosted the roast back in 2011, before Trump officially entered politics.

The video of the interview excerpt hit 100,000 views in about 24 hours. Reactions online were mixed.

Some called Snoop Dogg irrelevant since he had not recently released any albums, although only on the Fox News post of the story. Quite a few Fox News responses also veered into proving Snoop Dogg's assertions about Trump's support base.

While others, including some on the Fox News post, agreed with his comments.

The full Hip Hop Nation interview is set to be released on Saturday, September 22. Watch the uncensored interview excerpt here.