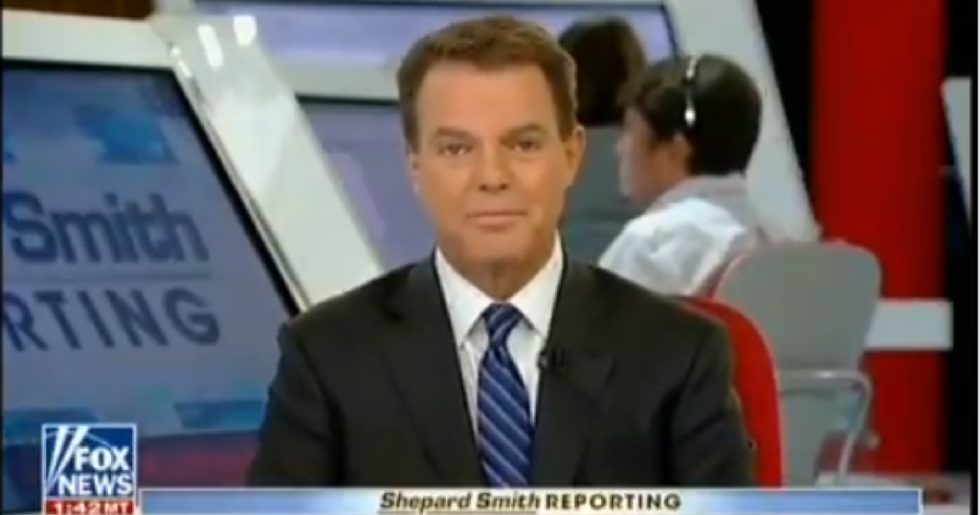 President Donald Trump's crusade against the free press has reached new heights in recent weeks, even including the president referring to his own words as "fake news." Trump has also referred to the press as "the real enemy of the people."

"For those of you listening at home, journalists are not the enemy of the people. It's quite the opposite."

"Our profession is enshrined in the Constitution, and the fourth estate holds the essential job of being your eyes and often your ears, and when appropriate, your voice," Smith explained.

The free press is a "cornerstone of our republic."

Smith then recited a list of major media networks, all of whom he said: "operate in the public interest." Journalists "work to discern what is truth, then to present it to you with context and perspectives" while "striving to hold those in power to the same standards."

Smith continued: "This is the foundation of what we do, it's our reason for being, our purpose."

Smith then issued a plea to his audience...

Never have I personally misrepresented the truth to you. Our reports are checked, rechecked and approved at the highest editorial level at this network. In the event I make a mistake, I tell you and correct it in a timely and appropriate manner.

...which was followed by a takedown of Trump and his endless attacks on journalists and the truth.

As an aside, when the president attacks journalists, we question his motivation and try to discover the underlying reason. For historically, those who regularly and as a matter of pattern attack the messenger, who degrade and belittle the purveyors of truth, and work to diminish the free press, often find the facts displeasing, and endeavor to keep you from knowing them.

"We are on guard," Smith concludes, "and we hope that politics aside, for the greater good, you are too."

Some people on Twitter couldn't believe what they had just heard from a Fox News anchor.

Smith's defense of the truth and of his profession was praised by folks on social media, who also shared their bewilderment as to why telling the truth is now considered "heroic."

@JoeNBC @ShepNewsTeam Shep Smith is one of the good guys who is not afraid to speak the truth while being surround… https://t.co/LHZNAlBRgL
— VinnytheC (@VinnytheC) 1532692024.0

Others admitted that the average Fox viewer probably wishes Smith would go away.

@JoeNBC Yes. He does keep reporting accurately. I can't help but wonder sometimes how he keeps working at FOX.
— William Frances🆘 (@William Frances🆘) 1532694098.0