The vote was along party lines. 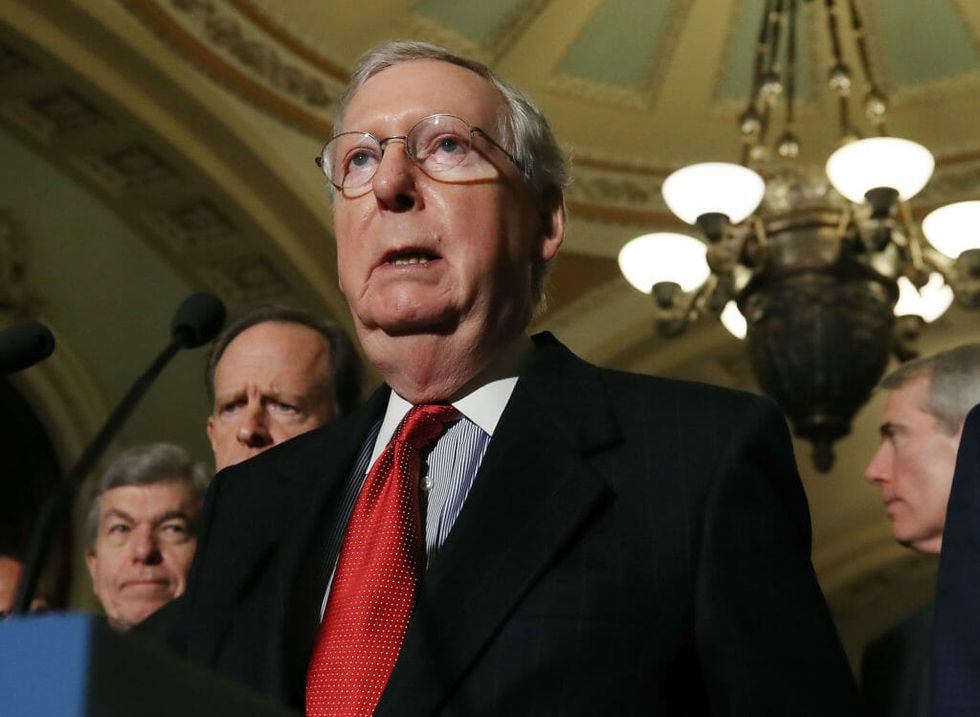 The Senate has passed a procedural vote––it passed 52-48––on the tax bill. The procedural vote allows debate to begin on the measure with a final vote expected later today or tomorrow. The GOP is now much closer to rewriting the country's tax code for the first time in three decades.

President Donald Trump weighed in as the vote finished.

"This week, the Senate can join the House & take a strong stand for the Middle Class families who are the backbone of America," he wrote on Twitter. "Together, we will give the American people a big, beautiful Christmas present-a massive tax cut that lets Americans keep more of their HARD-EARNED MONEY!"

This week, the Senate can join the House & take a strong stand for the Middle Class families who are the backbone o… https://t.co/ILfhlLOkSE
— Donald J. Trump (@Donald J. Trump) 1511996096.0

The president continued to advocate for the measure throughout the rest of yesterday.

Now, we have a once in a lifetime opportunity to RESTORE AMERICAN PROSPERITY – and RECLAIM AMERICA’S DESTINY. But… https://t.co/HNvPxZHEIz
— Donald J. Trump (@Donald J. Trump) 1512002459.0

He also claimed that "the only people" who don't care for the tax proposal are those who "don't understand" it and the "Obstructionist Democrats."

He also took yet another opportunity to rail against The New York Times, accusing the media outlet of lobbying for the Democrats in their alleged pursuit to kill the tax measure.

Trump adversarial jabs have continued despite a new report from the nonpartisan Congressional Budget Office (CBO) which revealed that the plan “gives substantial tax cuts and benefits to Americans earning more than $100,000 a year”––hitting the nation’s poorest citizens particularly hard––and that the legislation would “add an increase in the deficit of $1,414 billion over the next 10 years.”

The analysis also bears bad news for the removal of the Affordable Care Act's individual mandate which is included in the tax bill:

average premiums in the nongroup market would increase by about 10% in most years of the decade … relative to the CBO’s baseline projected. In other words, premiums in both 2019 and 2027 would be about 10% higher than is projected in the baseline… (t)he number of people with health insurance would decrease by 4 million in 2019 and 13 million in 2027.

Negotiations continue, however. Earlier this week, the GOP threatened to veer off schedule amid concerns that two senators––Bob Corker of Tennessee and Ron Johnson of Wisconsin––would balk. Reports indicate that Corker wanted assurance the bill would deliver the economic growth it promises and that he was able to "secure an agreement in principle that would trigger some kind of automatic tax increase if the GOP's anticipated growth didn't materialize." Johnson, for his part, had expressed his frustrations with "the way the tax bill treated tax rates for pass-through business income," but voted to advance the measure regardless. It's still unclear whether both lawmakers will support the final version of the bill once it hits the Senate floor.

There are several lawmakers who have misgivings about the bill. Senators Susan Collins of Maine and John McCain of Arizona have not yet thrown their support behind the legislation. Senator John Kennedy, a Republican from Louisiana, says he will wait to hear about the final proposal.

"I am not too keen on automatic tax increases," he told reporters. "Right now, my feeling about it is, I'd rather drink weed killer than vote for the thing."

Meanwhile, Senator Lisa Murkowski of Alaska, who had warmed to the proposal after much discussion, signaled she would vote for it. A reporter with MSNBC confirmed Murkowski's support.

Murkowski made headlines earlier this month after she said she would support repealing Obamacare's individual mandate as part of the tax-reform bill, despite having been one of the most vocal opponents of the health care debacle––and the repeal-and-replace bills––which dominated both chambers of Congress earlier this year.

Still, the future of the measure hangs by a slender thread. Senate Majority Leader Mitch McConnell can only afford to lose two votes. The bill will not pass if he loses three. Vice President Mike Pence would need to break a tie should all other Republican senators support the measure and all members of the Democratic caucus vote no.