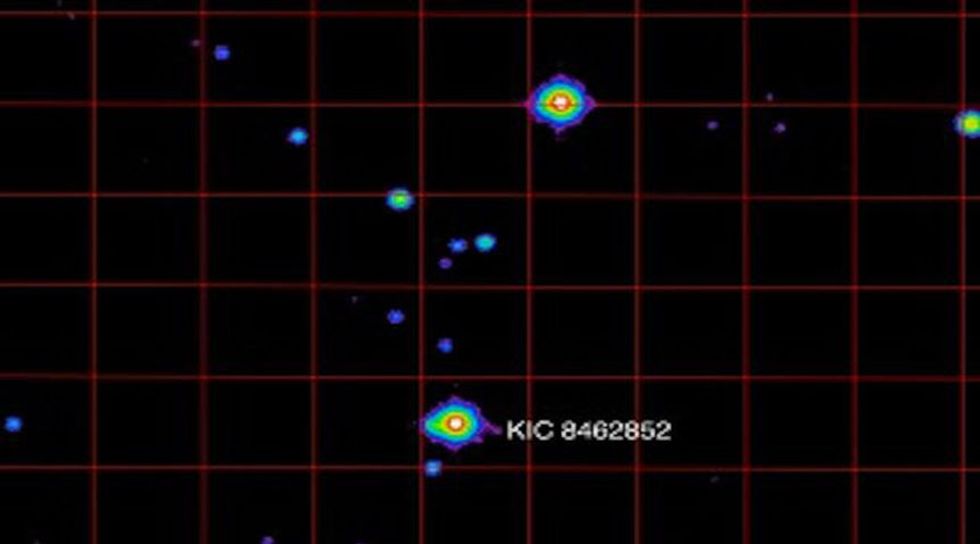 The Internet has been alight with speculation about the existence of alien megastructures since the publication of a paper about the star KIC 8462852 in early September. The star is one of more than 150,000 being monitored by the Kepler Space Telescope in the hopes of finding one orbited by an Earth-like planet.

Each year, the light from the stars in the area near the constellations Cygnus and Lyra generate more than 2.5 billion data points that are analyzed to look for changes in the strength of the light, or dips, because dips may indicate the movement of planetary systems in front of stars, especially if they occur at regular intervals.

The approximate location of KIC 8462852 via wikipedia

The amount of data generated by Kepler’s observations cannot be solely analyzed by computer. Humans are needed to look for oddities and information that algorithms might miss. For the Kepler mission, NASA has turned to volunteer citizen scientists who are part of the Zooniverse project. Some of these volunteers examined the data and noticed that the light from KIC 8462852 was dipping by about 20% at intervals. Astronomers then reviewed

the data and determined that the star was an older, so any changes were not from the recent formation of a system. This made it more likely that this was a cluster of matter orbiting the star. Additional analysis indicates that the cluster of matter may be larger than the star itself.

So what is it? What makes this star so unusual? The research published in the Monthly Notices of the Royal Astronomical Society by a team of nineteen professional and amateur astronomers details the process used to determine what the matter is not, as well as whether it is as unusual as it seems. They searched the data for similar results, and initially found more than 1000 stars with potentially similar patterns. However, most of these could be explained by other phenomena. When the remaining stars were reviewed, no similarities were found, leaving KIC 8462852 as an outlier.

Tabetha Boyajian, a Yale University astronomer, oversees the ‘citizen scientist’ “Planet Hunters” team. Boyajian et al. then turned to possible natural explanations for the mass blocking the star. The astronomers considered and ruled out debris from asteroid belt collisions, planetary system impacts and planetesimals. All three are ruled out by other measurements. The remaining natural possibility is debris from the break up of a comet. This is more plausible because a comet’s elliptical orbit would help to explain the interval between the dips and the changes in the dips.

None of this would have garnered the attention this story has received had Ross Anderson of The Atlantic not spoken to Boyajian and published a quote saying her research only considered “natural” possibilities, but that other astronomers were planning to search for data that would indicate that the matter passing in front of the star was created through technology. If so, this could indicate that it was a structure or a series of structures made by aliens. The likelihood seems small, but so was the possibility of finding such an unusual star in the first place. Astronomers will continue to monitor KIC 8462852 to see if they can find an explanation for its activity.