For Those Who Don't Respond to Anti-Depressants, Magic Mushrooms May Hold the Key 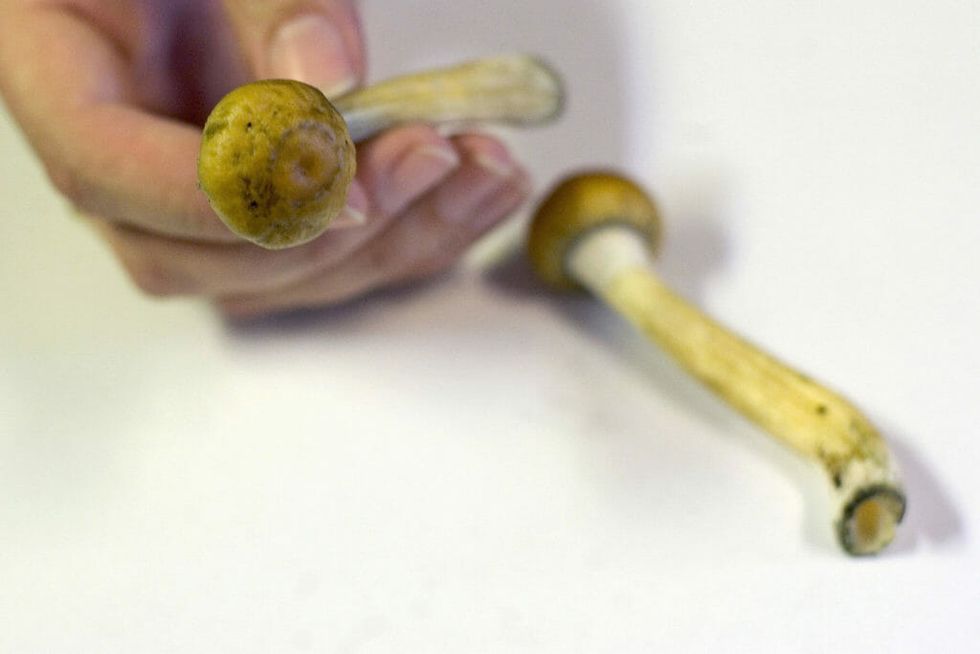 However, a recent study published in the New England Journal of Medicine reports that approximately half of the patients who were prescribed oral antidepressants were unresponsive. Couple this with the statistic that 1 in 10 Americans is prescribed an oral antidepressant and that fact is staggering. Many people who live with depression do not respond to today’s psychotropic solutions.

The five families of oral solutions are based on the assumption that the key to treating depression lies within the connectivity of the neurons; that the absorption of key neurotransmitters (dopamine, serotonin, norepinephrine) is critical to brain health. But what if this assumption is inaccurate or at the very least, suggests that altering neural synapses is not the only pathway for both cause and cure?

Because pharmaceutical solutions are not the answer to many who suffer with depression, scientists are scratching their heads for alternative treatments to combat not only depression, but also Post Traumatic Stress Disorder (PTSD) and addiction. Some answers could lie in the therapeutic ingredients for what society has traditionally considered recreational drugs. Clinical studies have been underway for depression remedies stemming from the clinical use of marijuana, Ketamine, LSD and magic mushrooms (active ingredient: Psilocybin).

A recent study of Psilocybin has shown promise for those who do not respond to oral anti-depressants. The study, conducted by the Imperial College of London, suggests that the amygdala, which rests at the base of the hippocampus, plays a part in regulating the longevity of emotion. Scientists have long shown that the amygdala is primarily responsible for basic survival response mechanisms, also called “flight/fight/freeze.” However, this recent study suggests that the amygdala may play a larger role than previously understood in regulating emotions, particularly those associated with depression.

Unlike many scientific studies (which are largely performed on laboratory animals), the Magic Mushroom study consisted initially of 20 humans who had been unresponsive to oral anti-depressants. Of the 20 subjects, 12 actually received treatment. Eight subjects were eliminated because the severity of their depression was not strong enough to warrant participation. Each subject underwent two Functional Magnetic Resonance Imagery (fMRI) scans one week apart. In a controlled setting, each subject was given one dose of Psilocybin for two sessions, first at a low dose, then an increased dose the following week. What they found was that the subjects’ amygdala responded to both positive and negative stimuli (they were shown happy and sad faces) after the induction of Psilocybin. The longevity of the effect on the amygdala is important to note, given that its role is for basic survival, not necessarily a regulator of moods such as happiness and sadness. Of particular interest was that almost half of the 12 patients did not report a relapse in symptoms of depression until three months after the introduction of Psilocybin.

Further, each of the subjects, via a self-assessment called Quick Inventory of Depressive Symptomatology,  reported a decline in their depression symptoms after just the two sessions with magic mushrooms. The study’s promise is summed up nicely by Robin Carhart-Harris of the Imperial College: "Based on what we know from various brain-imaging studies with psychedelics, as well as taking heed of what people say about their experiences, it may be that psychedelics do indeed 'reset' the brain networks associated with depression, effectively enabling them to be lifted from the depressed state.” He is quick to admit that the study size of 20 (12 actual participants) is small and that an increased sample size is necessary to for reaching solid conclusions on the power of hallucinogens for treating depression.

While the Imperial College of London is the world’s pioneer linking Psilocybin and depression, the National Center for Biotechnology Information (NCBI, part of the National Institutes of Health), conducted an intensive review of studies where hallucinogens were used to treat depression. Specifically, research reported in the Journal of Clinical Psychiatry stated that subjects who suffered from obsessive-compulsive disorder experienced relief in their symptoms after using Psilocybin in a controlled setting. Subsequent studies have suggested that therapeutic Psilocybin can positively impact addictions such as tobacco and alcohol abuse.

Anxiety associated with late-stage cancer was also studied using Psilocybin and cited in the same NCBI report. When introduced to psilocybin, several subjects reported a lessened sense of anxiety while living with terminal cancer.

Circling back to the Imperial College study, the hallucinogenic effect of the mushrooms varied in duration from 30 minutes to three hours, with the average time being approximately 120 minutes. While some of the participants reported initial treatment anxiety, that initial fear dissipated for all participants within 30 minutes. It is important to note that other than treatment anxiety, there were no side effects from the controlled experimental use of Psilocybin on any of the research subjects. This is markedly different than some of the reported side effects from recreational Psilocybin users. Uncontrolled, the ingestion of magic mushrooms can result in ego dissolution (complete loss of one’s sense of self). However, the recreational enticement of magic mushrooms can have a huge payoff. There is generally an escalated sense of happiness and understanding of the world. For many recreational users, this positive experience is worth the risk of a sometimes negative Psilocybin trip. Unlike its close relative Ayahuasca (a plant used by traditional Shaman in Peru), Psilocybin users do not realize that they are “tripping” and are therefore temporarily unaware of the reasons for escalated connection to personal and universal clarity.

It’s important to point out and pay some homage to other hallucinogens that currently are being tested to treat severe mental illness. In the summer of 2017, MDMA (street name Ecstasy) was approved by the U.S. Food and Drug Administration (FDA) for what is referred to as breakthrough therapy for the treatment of PTSD. According to the FDA’s website, “Breakthrough Therapy designation is a process designed to expedite the development and review of drugs that are intended to treat a serious condition and preliminary clinical evidence indicates that the drug may demonstrate substantial improvement over available therapy on a clinically significant endpoint(s).”

The Potential for Ketamine

Breakthrough therapy has also been granted for Ketamine, a hallucinogen often used as an anesthetic in clinical settings. Based on patient reports and outcomes of clinical studies, Ketamine appears to be a win when used for treatment of depression and mood disorders. Glen Brooks, who leads the New York Ketamine Infusion team, explains how Ketamine differs from conventional antidepressants: "If you think of it in terms of a computer, what Ketamine does is a hardware fix—not like anti-depressants, which are like a software fix." Currently Ketamine is administered to patients with severe depression at approximately two dozen special clinics nationwide. Multiple sessions are required, and the treatments are not covered by insurance. Each session costs up to $800 and at least six sessions are required initially, followed by periodic boosters. Ketamine’s future as a psychotropic solution is shaky. While it shows promise and has had positive impact on patients, the reality is that ongoing studies can cost millions of dollars. Since Ketamine is a generic drug, pharmaceutical companies cannot be granted a patent and, therefore, will be unable to see a return on investment from the research.

In the summer of 2017, another substance that was cleared for clinical trials in California is the lesser-known plant-based hallucinogen called Ibogaine. Ibogaine itself is illegal in the U.S., but in testing being done in Mexico and Brazil, for example, seems to be extremely effective in treating addiction. The clinical trials scheduled to take place this year in the U.S. will test a drug chemically similar to Ibogaine but without the hallucinogenic properties. Unlike Psilocybin, Ibogaine is often lethal because it can cause or exacerbate cardiac problems. It’s also extremely expensive. Patients seeking its use for addiction often will pay upwards of $10,000 for one treatment in Mexico.

According to the NCBI analysis, hallucinogens are a disruption to the brain’s usual way of processing and sending messages. Hallucinogens allow the opening of the mind and therefore allow for a deeper sense of consciousness and introspection. Deeper level self-reflection can help disrupt memories of a painful past (PTSD) or self -destructive behaviors (such as alcohol, tobacco, and drug abuse).

So with the proliferation of mental illness in today’s society, why don’t more organizations embrace the use of hallucinogens? One California non-profit group, MAPS (Multidisciplinary Association for Psychedelic Studies) is doing just that. Part of MAPS’ agenda is to shift the perception that hallucinogens are merely illegal recreational street drugs and serve no therapeutic purpose. Rather, MAPS supports the exploration of safety and effectiveness of hallucinogens and marijuana for depression, PTSD and drug addiction through private funding.

The future of hallucinogenic solutions to combat depression is wide open, and exploration is right now in its infancy. Unfortunately, all of the hallucinogens that show promise for mental illness are illegal in the United States and are categorized as Schedule 1 substances by the DEA, meaning they have no therapeutic or medicinal value. Researchers can, however, apply for research under the guidelines of Investigational New Drugs process. MDMA research was permitted under this process. Unfortunately, it took 10 years to get it migrated from research to a Phase III clinical trial. And for those suffering from depression, addiction or PTSD, that decade-long wait can literally mean the difference between life and death.