Results Are Out On Magic Mushrooms 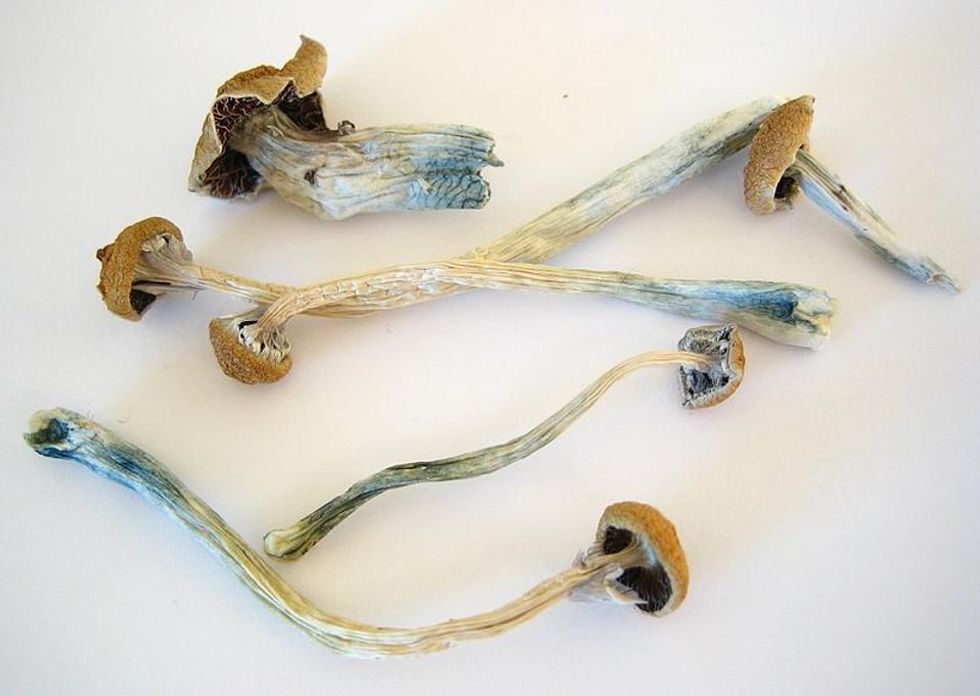 A worldwide study found hallucinogenic mushrooms, known as magic mushrooms, to be the safest illegal drug. Meanwhile, the medical community has been studying them as a treatment for a variety of mental health conditions, from anxiety and depression to PTSD and addiction. A debate continues over FDA approval for both medical and recreational use.

GDS2017’s results are based on almost 120,000 anonymous participants who responded online from 50 countries. As the world’s largest annual drug survey, for the past four years it has reported substance use, patterns of usage, and negative effects.

In 2016, greater than 12,000 respondents reported taking magic mushrooms. They ranked 6th most popular, slightly behind LSD, and well behind the most popular choices: cannabis, cocaine, MDMA and amphetamines. Of the 12,000 users of psilocybin hallucinogenic mushrooms in 2016, only 0.2 percent or 17 people, sought emergency medical treatment. GDS2017 explained that the greatest risk of taking mushrooms is ingesting the wrong type.

“Magic mushrooms are one of the safest drugs in the world,” according to Adam Winstock, founder of GDS and consultant addiction psychiatrist. He added, “There is no known lethal dose for... pure psilocybin.”

As additional basis for its findings, the study noted that “People who use psychedelics are generally very sensible and show some of the best preparation and adoption of harm reduction practices of any drug.”

Concurring with GDS2017’s conclusions about magic mushrooms, the Beckley Foundation—an NGO that supports psychedelic drug research—said they may lead to less emergency

treatment because “drug users may be more responsible when taking psychedelics than when consuming alcohol, cocaine, or other drugs.”

Furthermore, the Substance Abuse and Mental Health Services Administration’s National Survey on Drug Use and Health reported that psilocybin is not, itself, addictive or toxic to the organs.

Typical treatments for mental health disorders can include psychotherapy or common antidepressant medications.  A number of patients, however, fail to respond to such treatments or experience unfortunate side effects—which can range from insomnia to suicidal ideations. The overall safety of psilocybin hallucinogenic mushrooms makes them attractive to the medical research community to treat numerous mental health conditions.

"There's a real unmet need for people who can't tolerate the standard treatments," according to George Greer, psychiatrist and medical director of the Heffter Research Institute—the primary psilocybin research funder.

In 2016, both NYU and Johns Hopkins released studies showing positive results for using psilocybin to treat cancer patients suffering from acute disease-related anxiety and depression. Both studies indicate significant reductions in depression and anxiety for approximately 80 percent of participants, lasting for more than six months—often with a single dose. While some experienced short-term side effects such as alarming hallucinations, nausea or vomiting, there were no long-term negative effects.

As lead author of the Johns Hopkins study, Griffiths said, “People are facing their own mortality, their own demise.” He added, “That’s a very special and quite poignant

vulnerability that many people have in facing life-threatening illnesses.”

Stephen Ross, psychiatrist and lead author of the NYU study said that “the moment they get psilocybin, their distress comes down. That’s very new in psychiatry, to have a medication that works immediately for depression and anxiety and can last for that long.”

Risks Versus Benefits of Mushrooms

Despite the remarkable benefits in treating mental health conditions, one concern from scientists is that they aren’t certain precisely how psilocybin works, though this issue commonly occurs with drugs that interact with the brain’s chemistry.

One theory is that psilocybin calms the prefrontal cortex, where high activity can be associated with depression. Another hypothesis suggests that it acts on the brain’s interaction with a neurotransmitter known as glutamate, which affects memory and learning. Ross’s theory is a type of “inverse-PTSD,” described as an incredibly positive memory that lingers, continuing to affect the participant for an extended period after the original event.

Another idea is that the mysticism of the event itself causes a change in mood. Griffiths explained, “There’s a sacredness or a reverence to that experience ... it’s also accompanied by positive mood, in the sense of an open-heartedness, love or benevolence.” He added that people may feel that “the experience is more real and more true than everyday waking consciousness. Although the effects of the drugs are gone by the end of the day, the memories of these experiences and the attributions made to them endure.”

Occasionally, the experience may result in what is known as a “bad trip,” where people experience negative feelings, act aggressive or violently, and put themselves or others in harm’s way. The irony, however, is that another study authored by Griffiths showed that most people taking magic mushrooms who self-reported a bad trip later referred to it as a “meaningful” or “worthwhile” experience. More than half even labeled it “one of the most valuable experiences in their life.”

While researchers don’t seek to create bad trips, Griffiths and many other researchers embrace the idea of using psilocybin in a controlled environment as a catalyst to move past

the deep anxiety or depression of a cancer patient or the trauma of a person living with PTSD.

Another small but successful psilocybin study’s lead author, Dr Robin Carhart-Harris, said: “Psychedelic drugs have potent psychological effects and are only given in our research when appropriate safeguards are in place, such as careful screening and professional therapeutic support.

“I wouldn’t want members of the public thinking they can treat their own depressions by picking their own magic mushrooms. That kind of approach could be risky.”

If all moves forward as planned, researchers told Mashable, the FDA could approve psilocybin for medical use in approximately ten years.

"One has to be very cautious in moving forward, in terms of medicalizing this class of drugs," Bertha Madras said, a psychologist and a psychiatry professor at Harvard Medical School.

"If there is a perception among youth that it's a medicine," Madras told Mashable, "we're going to trigger a cascade of unintended consequences that will have far greater impact than the few people that have been helped in clinical trials thus far."

On the other hand, Winstock and Brad Burge – the latter from the Multidisciplinary Association for Psychedelic Studies (Maps) – both urged that their findings demonstrate a need for drug policy reform. Specifically, they want to change the designation of psychedelics, moving them off the schedule one list of the most dangerous controlled substances.

“Drug laws need to balance the positives and problems they can create in society and well-crafted laws should nudge people to find the right balance for themselves,” Winstock said.

“People don’t tend to abuse psychedelics, they don’t get dependent, they don’t rot every organ from head to toe, and many would cite their impact upon their life as profound and positive. But you need to know how to use them.”

According to Winstock, “Combined use with alcohol and use within risky or unfamiliar settings increase the risks of harm most commonly accidental injury, panic and short lived confusion, disorientation and fears of losing one’s mind.” In addition, some people experience panic attacks and flashbacks. Winstock advises people using mushrooms to plan “your trip carefully with trusted company in a safe place and always know what mushrooms you are using.”