Sweden just ran out of trash. 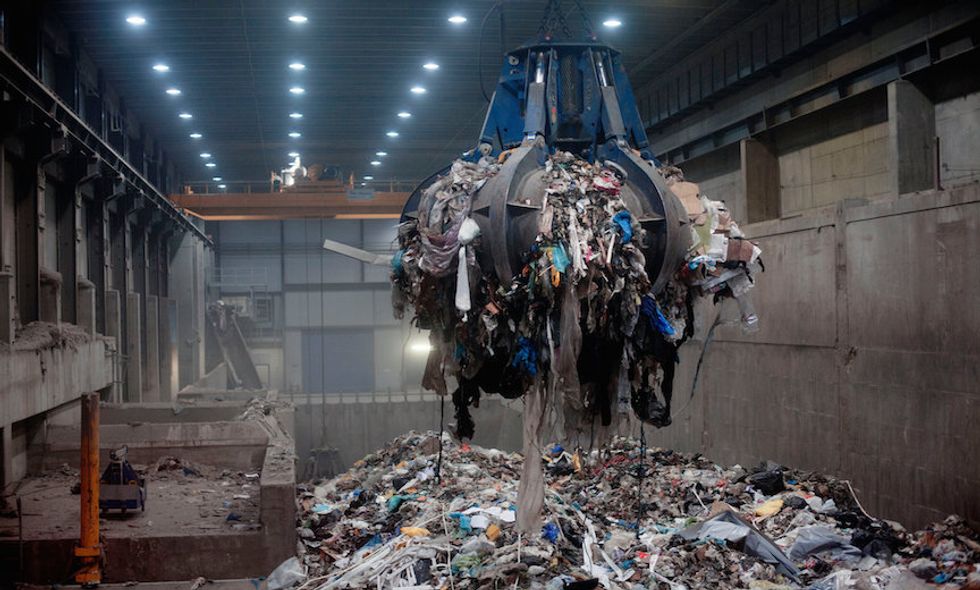 Sweden has run out of trash. In fact, it has become such an expert at managing its own waste that it has to import garbage from neighboring countries to keep its 32 waste-to-energy (WTE) plants running—2.7 million metric tons in 2014. Less than one percent of its trash ends up in landfills. In the United States, that percentage is 54.

So what is Sweden doing that we aren’t? And should we follow their lead?

About half of Sweden’s waste is conventionally recycled or composted. The United States lags far behind at around 34 percent—where it has stubbornly hovered for about a decade. This doesn’t put the United States at the bottom of the world’s recyclers. Chile and Turkey, for instance, only recycle one percent of their waste. But it also doesn’t put the U.S. at the top. Germany recycles or composts 65 percent of its waste. Korea is at 59 percent.

Sweden is striving to get that number even higher, with an intensive governmental communications push. “Swedish people are quite keen on being out in nature and they are aware of what we need to do on nature and environmental issues. We worked on communications for a long time to make people aware not to throw things outdoors so that we can recycle and reuse,” said Anna-Carin Gripwall, director of communications at the Swedish Waste Management’s recycling association.

The remaining half of Sweden’s household waste is burnt for energy, which is less energy-efficient than reusing or recycling it—though Sweden is working on shifting that balance. Weine Wiqvist, CEO of the Swedish Waste Management and Recycling Association, says that Sweden is “trying to ‘move up the refuse ladder,’ as we say, from burning to material recycling, by promoting recycling and working with authorities.”

Out of this waste, about 15 percent remains in ashes. From the ashes, materials are separated out and recycled. Some of it used to make gravel for road construction. The

remaining one percent is considered unusable and deposited in landfills.

Although the Swedes firmly support burning waste, the U.S. is not quite so keen. (About 12 percent the United States’ trash is now incinerated for energy.)

For one, the practice is not as energy-efficient as recycling. While burning waste does get reused in the form of fuel (WTE powers about 8.5 percent of the country’s electricity), products are often burned before their full potential is exhausted. For instance, wood fiber can be used up to six times. If it is burned before then, energy is wasted by replacing used paper with fresh raw materials.

Burning also has the drawback of releasing CO2 into the atmosphere—and lots of it. The EPA reported that incinerating garbage releases 2988 pounds of CO2 per megawatt hour of electricity produced. That’s more than coal, at 2249 megawatts per hour.

But those numbers are less dire than they sound. The EPA noted that much of that CO2 would have been released over time anyway as “part of the Earth’s natural carbon cycle.” This brings down the CO2 emissions associated with the burning to only about 986 pounds per megawatt hour—less than natural gas at 1135 pounds per megawatt hour.

The practice nonetheless still has its detractors. The Natural Resource Defense Council, for instance, is against it, stating that it relies “on dirty fossil fuel energy or create[s] other pollution hazards during the process of energy extraction.”

Sweden, for its part, claims it has safeguards in place that make the emissions 99.9 percent nontoxic. It filters the emissions through dry filters and water. The dry filters are deposited; the sludge from the dirty water is used to refill abandoned mines.

There is also a NIMBY problem here—nobody wants to live near a power plant, no matter what it’s burning.

Maybe WTE is the answer, maybe it isn’t. But what is certainly inspiring about Sweden’s waste policy is their dedication. There has been national momentum behind decreasing

waste for decades. Sweden was one of the first countries to heavily tax fossil fuels in 1991. It has developed a cohesive recycling program at the national level. It has developed the infrastructure that makes its waste program possible.

Recycling is engrained in society, even if it does take an extra step or two. “People rarely question the ‘work’ they have to do,” said Gripwell.

After 25 years of hard work at a local and national level, they now only send one percent of their waste to landfills.

There is unlikely to be a similar national push under the Trump administration and Scott Pruitt’s EPA. States and municipalities have been leading the charge. California and Florida, for instance, have put forward goals of 75 percent recycling, composting or source reduction of solid waste by 2020.

While these state-led goals are laudable, in general there is little meat behind them. Very few penalize individuals for failing to recycle. But like Sweden, perhaps the United States needs to start with a mind shift.

Given the lag between a shift and action, though, and given the increasing volatility in our climate, can we wait 25 years?