'Moonmoons' Are a Thing Now, and, Yep, They're Pretty Much Exactly What They Sound Like 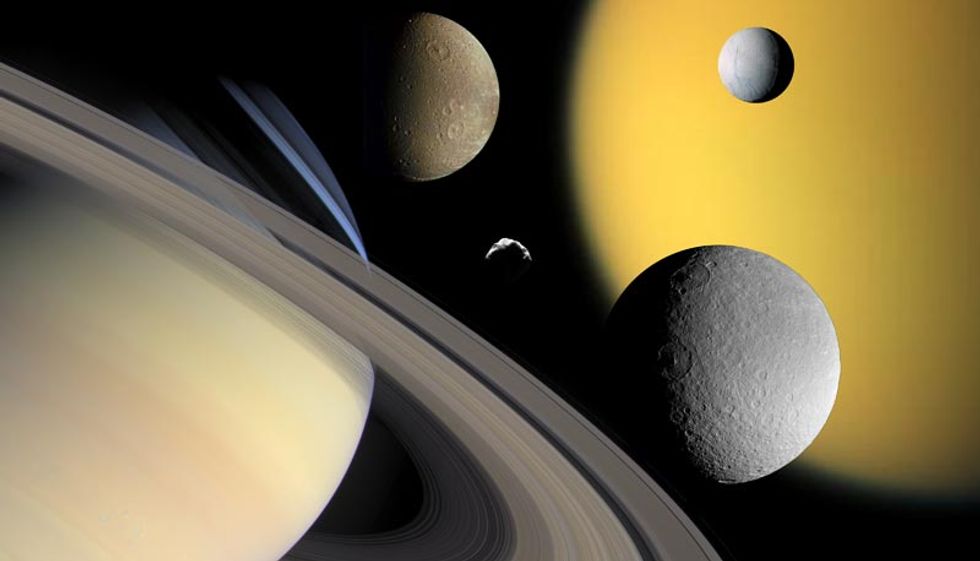 This image collage features Saturn and the moons Titan, Enceladus, Dione, Rhea and Helene, which will be studied in the extended mission. (NASA/JPL/Space Science Institute)

Since Galileo and Copernicus, most of humankind has understood that planets orbit our sun and that moons orbit the planets. Astronomers have also shown that there are planets in other solar systems outside of ours called “exoplanets.” Furthermore, the definition of a planet has been refined with much criticism as Pluto got downgraded to “dwarf planet” status. Now, it has been revealed that there might be even smaller objects orbiting moons that have been bestowed the ignominious title of “moonmoons.”

According to recent reports, there might be “skyscraper-sized” objects orbiting the moons of Earth, Jupiter and Saturn. If a combination of two factors is met, if the moon is sufficiently large and distant from the planet it is orbiting, there is a good probability of it having moonmoons. Astronomers studying this phenomenon call this the “Goldilocks zone,” where the moonmoon is tethered close enough to its cognate moon gravitationally to prevent it being pulled away by the planet, but far enough away to not get pulled into the moon by its gravitational field. Within our solar system, there are three planets that meet these criteria: Earth, Jupiter and Saturn. Specifically, moonmoons have been speculated to exist in the orbits of Saturn’s moons of Iapetus and Titan, Jupiter’s moon of Callisto, and Earth’s single moon.

It is important to note that no physical evidence for the existence of moonmoons in our solar system exists, though there is a mathematical probability to support the notion. Recently, two scientists, Juna Kollmeier and Sean Raymond, published a scientific paper titled “Can Moons Have Moons?” that described equations normally used to predict tidal patterns tied to lunar cycles being adapted to predict whether moonmoons could actually exist. The authors asserted that a wide orbit of separation would be necessary for “submoons” of approximately 10 kilometers in diameter to survive circling a 1000-kilometer diameter moon. Without such conditions being met, centripetal forces would either whip the moonmoon out into space or the moonmoon would impact into the moon it is circling.

The authors note that “many moon systems are not dynamically able to host long-lived sub-moons.” This could explain why, apart from their relatively small size, they have not previously been observed. There’s simply not enough space for them to exist long term.

Interestingly, the naming of these small moons has captured more interest than the potential existence of the small moons themselves. The scientists that wrote the paper referred to them as “submoons,” which was their choice as no official name has been given yet. It was the internet that subsequently birthed the term “moonmoons.”

Indeed, a term like “moonmoons” ranks with the internet naming sensation of “Boaty McBoatface.” However, there have been worse suggestions for assigning a name to such objects in orbit of moons, including but not limited to: moonettes, grandmoons, submoons, nested moons, moon-squareds, and moonitos.

Another scientific article elaborating on the potential for whether such small moons might exist for exoplanets with exomoons such as Kepler 1625 used the term moon-moon, though in this instance, it was hyphenated.

It did not take long for memes to be created from the moonmoon internet discussions. Furthermore, Atlas Obscura contributor Sarah Laskow posited that “recursive places” have a certain appeal with the general public. Such places include volcanoes within volcanoes and islands within islands. Laskow personally prefers “submoons” or “metamoons” to describe this astronomical phenomenon, but thinks that moonmoons might be here to stay.

Regardless of the final moniker, it is fascinating how the public has become fixated on naming something that has yet to be proven to even exist by the scientific community. It is humorous to report that some individuals have already concocted name suggestions should moons of moonmoons be discovered.