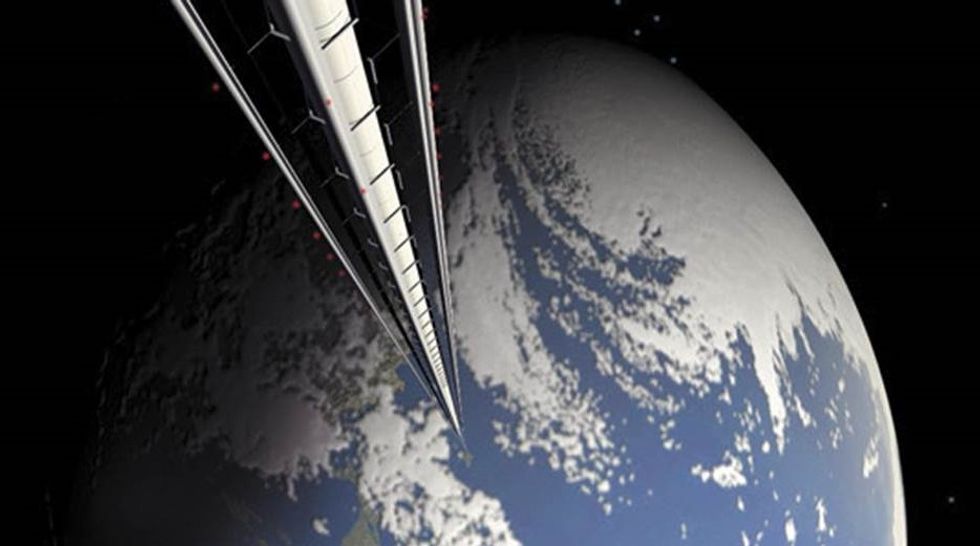 In Arthur C. Clarke’s epic Space Odyssey, it was posited that by the year 3001, humankind would have solved many of the societal problems we face today and transformed Earth into a utopian ideal. One of the technological marvels depicted in that idealized future was the construction of towers on the continents of Earth that reached all the way to space stations in orbit of the planet. Inside of each of these “space towers” was an elevator that could rapidly propel individuals up through the different levels into space, thus eliminating the need for rocket-propelled spacecraft to enter orbit. Clarke was so enamored by this idea that he wrote an entire book called The Fountains of Paradise about the concept.

However, unbeknownst to most people, for decades, the National Aeronautics and Space Administration (NASA) has been developing plans to build a “space elevator” not too dissimilar from what was suggested in the Space Odyssey series. Now, it appears that international scientists and engineers are poised to begin construction once a critical proof-of-concept experiment is completed.

Indeed, if the experiment is successful, a company based in Japan called the Obayashi Corporation wants to have a space elevator under construction by 2050. Similar plans are in motion for China, which would like to begin its space elevator program as early as 2045.

The original idea for an elevator into space has been attributed to Russian scientist Konstantin Tsiolkovsky, who in 1895 was apparently inspired about such a feat of construction from the Eiffel Tower. In lieu of an actual elevator, Tsiolkovsky imagined a tower that would extend from the planet surface all the way into space, where it would terminate at a “celestial castle.” In modern parlance, his dream would involve: two stations (one terrestrial and one in orbit) connected via cable to which an elevator carrier car could be attached. This concept was refined in the 1960s by Russian engineer Yuri Artsutanov, followed by American engineer Jerome Pearson in the 1970s. Indeed, it was Pearson’s 1975 publication elaborating upon the technicalities of such an engineering feat that Clarke expanded upon for his book The Fountains of Paradise. In some artists’ renderings of the elevator vehicle, it is called the “Clarke Clipper” in honor of Sir Clarke.

An elevator or other object attached to the cable would be subject to the dueling forces of the downward gravitational pull and the upward centrifugal force resulting from the planet’s rotation. The cumulative physical effects applied to the space elevator are termed the “apparent gravitational field.” Importantly, the cable needs to maintain a certain degree of tension for an elevator to safely traverse the distance. Every proposal to date suggests that the ideal location for the ground station would be somewhere along the equator, likely in the ocean, with a counterweight space station that would keep the 62,000-mile length connecting cable taut. It has been estimated that it would take about 5 hours for elevator cars to ascend from the terrestrial base to the orbiting space station.

The proof-of-concept experiment that will be conducted at the International Space Station represents a necessary first step before the commencement of any large-scale construction efforts. Physicists from Shizuoka University in Japan, working in partnership with the Obayashi Corporation, have devised the experiment, which has been termed the “Space Tethered Autonomous Robotic Satellite-Mini elevator (STARS-Me). The test entails the use of a 10-meter length of steel cable that will be tautly stretched between two small devices called “cubesats” and a motorized robotic box called the “climber” that will move along the cable within the weightless environment of space. Cameras will be attached to the cubesats, which will observe the movement of the robot along the tether. Notably, this will be the first actual investigation of the conditions that a space elevator would confront while operating in space.

The president of the International Space Elevator Consortium (ISEC), Pete Swan, emphasized that the STARS-Me experiment is a very critical first step before actual space elevator operations can be contemplated. Although acknowledging that much more work will be necessary before a space elevator can be a reality, Swan asserted that “the space elevator community feels ‘tech ready.’  We would pass the classic technology readiness assessment that is standard to the development process.”

Before the construction of a space elevator can commence, two major stumbling blocks need to be overcome. The primary hurdle is the development and mass production of a material that is both sturdy enough and light enough to support the tether that will be required to traverse the distance and connect the space station with the ground station. The steel cable being used in the STARS-Me experiment is far too heavy to employed the construction of an actual space elevator. Such a cable will experience stresses due to the rotation of the Earth and the planet’s gravitational pull. Currently, engineers are exploring carbon-based nanotubes (CNTs), diamond nano-threads, and graphene ribbons as suitable materials for the space elevator. Currently, graphene seems to be the preferred option, which has been demonstrated to be about 200 time stronger than steel. Unfortunately, graphene cannot currently be manufactured economically and in large enough quantities to support the construction of the space elevator, though this shortcoming is predicted to be overcome sooner rather than later.

Moreover, certain safety issues would need to be reconciled for such a project to move forward. These include protecting passengers on the elevator cars from the radiation bombardment that would be experienced as it moves through the Van Allen belts in Earth’s upper atmosphere. Additionally, a navigational problem would arise for both air and space vehicles near the space elevator. And finally, orbiting debris from manmade vehicles and naturally occurring objects such as meteorites could pose a significant danger to the project.

If the construction of a space elevator is demonstrated to be feasible, it would be an economic game-changer with regard to the expansion of human influence into space. The cost to send people and materials into space would be a hundredth of the current cost of rocket-propelled space vehicles. Currently, the price tag is $3500 per pound to send stuff into orbit, but the space elevator price would be as little as $25 per pound. And several of the scientific minds behind the current space elevator project think that the technology could be applicable to engineering a similar elevator to and from the surface of the moon.

The idea of a space elevator was highlighted in a documentary film called Sky Line that debuted in 2016. The filmmakers wanted to highlight the efforts of scientists and engineers around the world that have endeavored to make the theoretical concept a reality. One of the filmmakers behind the documentary appropriately stated: “it’s a story about chasing dreams and thinking about what’s possible.”

Famous physics professor, Dr. Michio Kaku, described the development of a space elevator as the “Holy Grail of space exploration.” He further romanticized the idea of “opening up space to the average person” and “taking a ride into the heavens” after pressing the “up” button. If the preliminary experiments succeed and the practical construction hurdles are surmounted, rocket ships may one day soon be looked back upon as relics of days gone by, much as modern automobile drivers view the original Model T Ford.