The Chinese Just Turned On A Massive Alien-Hunting Telescope 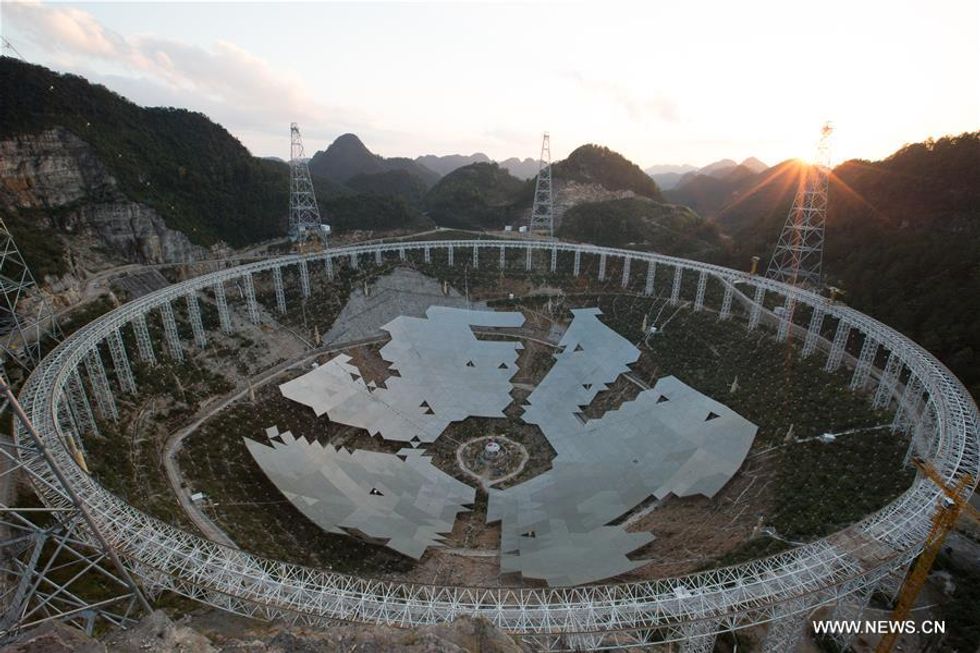 The world’s largest radio telescope is now operational. China hopes to use it to achieve “major advances and breakthroughs at the frontier of science,” said China’s President Xi Jinping. In particular, the Chinese hope to learn more about how galaxies evolve and perhaps find definitive proof of extraterrestrial life.

“This is very exciting,” said Professor Peng Bo, deputy project manager of the Five-hundred-meter Aperture Spherical Telescope (FAST). “For many years, we have had to go outside of China to make observations—and now we have the largest telescope. People can’t wait to use it.”

The telescope, at 500 meters—or roughly a third of a mile – is massive. The largest radio telescope up until now pales in comparison at a diameter of 305 meters. FAST is made up of thousands of triangular panels, which can be adjusted and re-angled to study different parts of the sky.

For telescopes, size matters. They work by listening for radio waves produced by objects in outer space. Because of FAST’s size, it is able to hear signals from further away than has previously been possible.

Whether the resettlement was necessary remains in doubt. The technology needed to interface with FAST would have required the residents to be constantly using sophisticated

electronic equipment—a proposition that seems unlikely given the rural population.

Each displaced resident received 12,000 yuan (about $1,800, or around half of the average yearly salary for workers) and was resettled in a nearby location.

While the telescope is now operational, it is still undergoing testing and recalibration. “Normally a traditional telescope will take about two years to become fully functional, but FAST is so big I would say we need three years before it is open to the world,” said Professor Bo.

Even in its testing stage, FAST has already detected radio waves from a pulsar 1,351 light-years away. (Pulsars are imploded cores of stars that emit radiation.)

But people may be most excited about the telescope’s potential to find alien life. Said Professor Bo: “FAST’s potential to discover an alien civilization will be five to 10 times that of current equipment, as it can see farther in darker planets.”

In addition to potentially leading to scientific breakthroughs, the telescope does something more definitive: it helps cement China’s emerging role as a scientific powerhouse. President Xi Jinping has made space exploration a priority for China, fast-tracking plans for a space station and to land a man on the moon. The government hopes to achieve both goals within the next 20 years.

“Astronomy is an ultimate expression of ‘pure’ science that has little immediate practical benefits,” said Luis C. Ho, director of the Kavli Institute for Astronomy and Astrophysics at Peking University. “It is a luxury that only the most advanced economies enjoy.”

With this telescope, China shows itself to be one of those economies.