Despite segregation, racism, and misogyny, Katherine G. Johnson blazed a trail for scientists at NASA. 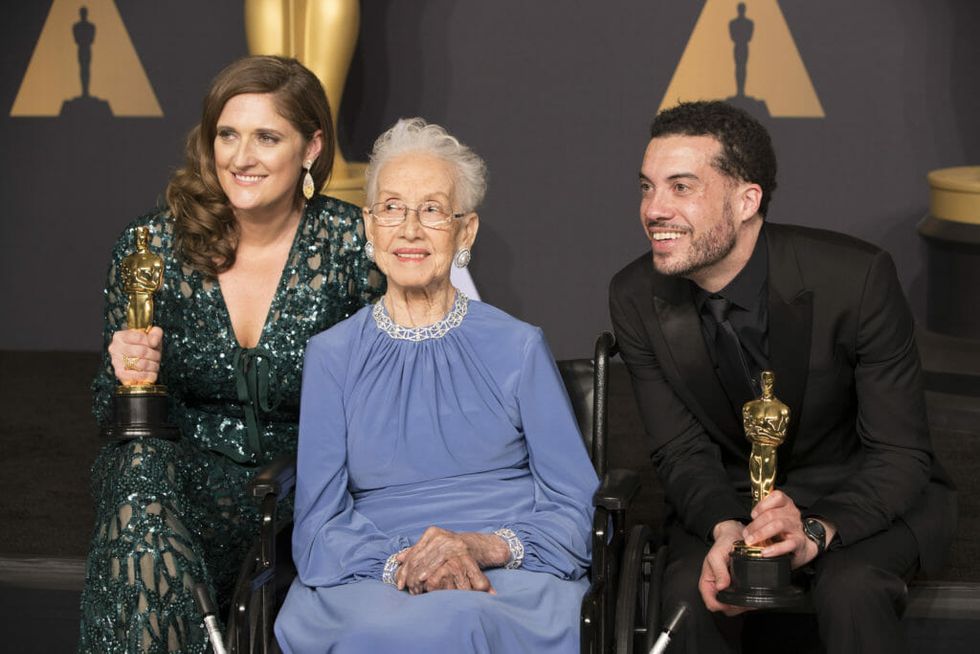 For a girl who loved to count everything, you might expect Katherine G. Johnson to be grateful that she was alive to count her 99th year. It’s not every day that a civilian gets honored by NASA, as Johnson was last month as the space agency opened the Katherine G. Johnson Computational Research Facility in Hampton, Virginia.

But you would be wrong. When asked pointedly about the distinction bestowed upon her for playing such a pivotal role in the American space program, the nonagenarian didn’t know what to make of the hoopla.

“You want my honest answer?” Johnson said. “I think they’re crazy [to name it after me].”

But although Johnson might be at a loss, the rest of the world better understands the role she played in history as a “human computer” after her life was chronicled in last year’s Oscar-nominated film Hidden Figures — itself based on the book by the same name written by Margot Lee Shetterly.

“We are living in a present that they willed into existence with their pencils, their slide rules, their mechanical calculating machines — and, of course, their brilliant minds,” said Shetterly at the ribbon cutting ceremony.

“At every fork, her talent, her hard work and her character pulled her toward her destiny. At every turn, she made a choice to become the protagonist in her own story and then of ours.”

Hers is a story of brilliance, but it’s also a story of perseverance and resolve, of creativity and intuition, of strength and honesty.

Every obstacle imaginable littered the road before her. Segregation. A school system that offered few resources for black learners. Racism. Misogyny. Life as a single mother.

Yet Johnson overcame every challenge, with grace and equanimity.

Like so many extraordinary lives, it began humbly. Katherine Coleman was born in 1918 in White Sulphur Springs, West Virginia. From her earliest years, Johnson remembers loving numbers, so she never stopped counting — steps to school, footfalls to church, or drops falling from a leaky roof during spring rains.

The young prodigy couldn’t be contained even by the era’s bigoted constraints. With few exceptions, segregated schools for poor black students ended at grade eight. In other words, for most African Americans, junior high was the end of the line even for the most gifted students. But Joshua Coleman realized that his daughter was special — she was ready for high school at age 10 — so he drove his family 120 miles to Institute, West Virginia, to further her education. It proved prophetic. Johnson graduated from high school at 14, and college just four years later.

Like her father, Johnson’s high school principal recognized that she was destined for greatness. He would walk her home during the winter evenings when darkness had descended early, talking to her about the stars, and helping her identify the constellations.

At West Virginia State College, she found two fine mentors in Dr. William W. Schiefflin Claytor and Professor Angie Turner King, both regarded as scientific and civil rights pioneers. Claytor is a legend in his own right, garnering renown in the 1920s and ‘30s as both a gifted student and the third African American to earn a PhD in mathematics. Recognizing a youthful kindred spirit, Claytor nurtured his young protegée, creating a new program in research mathematics to harness Johnson’s full potential. Many courses that Claytor offered were new to West Virginia State; in one, Johnson was the only student enrolled.

It’s worth side-stepping for a moment because Claytor’s life demonstrates how much racism he and other scholars like Johnson and King faced in a bigoted America. Despite winning a coveted mathematics prize during his tenure at West Virginia State to complete post-doctoral studies at University of Michigan, the administration there refused to hire the distinguished academic —despite an outcry by students — when a faculty position opened. A distinguished professor recruited Clayton for a fellowship at his university, but Princeton balked at hiring a “colored.”

And so it went. Across the US, academic institutions refused to offer Claytor teaching and research positions befitting his status as one of the most gifted minds of the era. Though he was allowed to present papers at the American Mathematical Society, he was not allowed to fraternize at the same hotel as his peers. In fact, Claytor would might have been unemployed in the 1940s if not for a world war, and an eventual opening at Howard University in 1947.

That sounds like such a dry fact, but it’s actually a pivotal moment in civil rights history. Just one year previously, the United States Supreme Court had ruled that individual states must offer the same university programs to white and black students, either by creating black universities and colleges, or by admitting black students to white-only universities. Johnson was one of three African American graduate students integrating segregated universities in 1939. But she left grad school a year later to give birth to her first child.

Though she wanted to be a research mathematician, Johnson raised her family and taught for a dozen years until she heard that the National Advisory Committee for Aeronautics (NACA) — the precursor to NASA — was hiring every talented mathematician they could find, black or white, for their guidance and navigation department. In a nutshell, as a human “computer,” Johnson did the complicated mathematical grunt work that allowed the engineers to do their jobs.

A talent for ignoring laws and regulations

By chance, one day she was seconded to the all-male, all-white flight research team. They were hardly prepared for Katherine, who frequently spoke her mind, but she proved to be so talented and so creative that they “forgot to send her back to the [computer] pool.” A lesser force of nature might not have survived the pressure or the prejudice, but Johnson knew her worth. When she was told that she couldn’t attend the engineering briefings, she showed up anyway, asking for documentation that explained why she shouldn’t be there since she was doing the same job as everyone else.

The Civil Rights Movement was just in its infancy, so racist prohibitions were commonplace. Technically, by working with white men, Johnson was breaking federal segregation laws introduced during Woodrow Wilson’s presidency which required people of color to eat, work, and use the bathroom in facilities that were kept separate from whites.

But NACA’s flight research team was the perfect place to break the rules. Everyone was so focused on their work and the immensity of the task of putting a man into space that the engineers just let her do her job. They couldn’t afford to ignore her talent. The overt racism that others in the “colored computers” pool faced was less prevalent in this department, so Johnson simply ignored it.

The 1957 launch of Sputnik changed Johnson’s life, as it did so many others. In truth, Sputnik changed the world. This was one of the coldest periods in the Cold War between the western nations and the Eastern Bloc of communist countries. The Soviets had thrown down a gauntlet, by being the first into space with a working satellite, and the world took notice. When Cosmonaut Yuri Gagarin became the first human to orbit the planet, it seemed like communism had claimed the space war.

The enormous chasm separating the American and Soviet space programs was bridged by the work of women and men like Johnson. The role that Johnson played cannot be overstated. The mathematical formulas she calculated — with astonishing accuracy — defined the launch window and trajectory that astronaut Alan Shepard flew when he became the first American in space. At this time during the Mercury missions, NASA began deploying warehouse-sized “supercomputers” to calculate launch windows and orbital trajectories, but John Glenn refused to put his life in a computer’s hands until Johnson double checked the results.

“Go get the girl,” Glenn is reported to have said on the launch pad. “If she says they’re good, then I’m ready to go.”

Glenn orbited the planet three times, and his incredibly successful voyage swung the pendulum in the space race back over to the Americans. The US never again lost momentum on its way to the 1969 moon landing. Johnson was there through it all, with her impossibly precise calculations ensuring that the lunar module — The Eagle — would safely rejoin the Apollo II command module for the voyage home.

In total, Johnson’s career at NACA and NASA spanned more than 30 years, ending with her work on the space shuttle program. She co-authored 26 groundbreaking papers over the course of an extraordinary life.

History took a while to catch up with her. Though she was recognized previously by NASA on a handful of occasions with distinguished awards, honorary doctorates came later in life, as did the nation’s highest honor — The Presidential Medal of Freedom — bestowed by Barack Obama in 2015. The Katherine G. Johnson Computational Research Facility is a fitting bookend for a remarkable career of a girl who just loved to count.

“I like the stars, and the stories we were telling, and it was a joy to contribute to the literature that was going to come out,” Johnson said. “But little did I think it would go this far.”