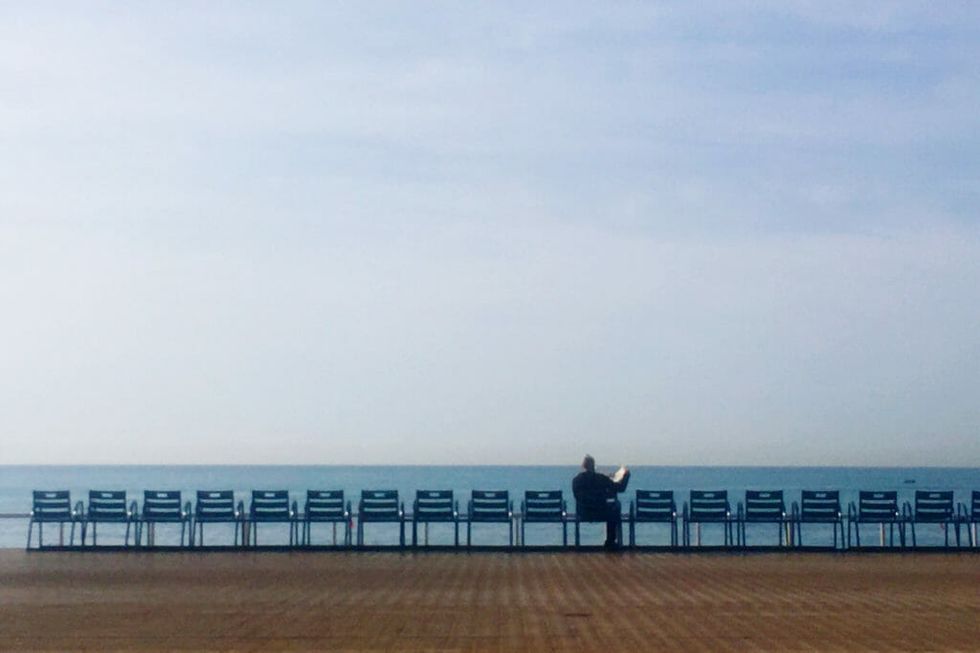 If you aren’t lucky enough to live near the ocean, a lake or a river, science suggests you should consider booking your next vacation next to some clear, blue body of water. Specific benefits from looking at the ocean—from breathing coastal air and even walking in the sand—could explain Hawaii’s rank as the happiest and healthiest state in America in Gallup’s latest Healthways Well-Being Index.

Health Benefits of Being in Proximity to Water

Dr. Wallace J. Nichols, a marine biologist, wrote the bestselling Blue Mind toexplore the benefits of spending time near bodies of water. He told Second Nexus the research stems from all branches of the sciences. He also indicated there are studies about water’s positive effect on people with PTSD, high-level anxiety and addiction.

That’s not to mention the positive effect being in water can have on the physical body, including the circulatory system, the bones and neuropsychology through sports, movement and opportunities for social encounters with family and friends. Nichols explained. “We tend to study disease more than we study health.”

In addition, there is a growing body of specific research related to the health benefits of maintaining a proximity to the water. Research from the University of Exeter in 2012 indicates that living close to and spending time near a beach correlates with people who have better health and sense of well-being.

A 2013 study published in Health and Place controlled for more factors than the Exeter study, but came to the same conclusion: “Individuals reported significantly better health when they lived nearer the coast.” The benefits applied to both physical and mental health, and researchers suggested policymakers consider the cumulative community effects.

In 2016, while studying the effects of natural views from people’s homes—known as both green and bluescapes, which included ocean views—on the human psyche, researchers in New Zealand stumbled upon an unexpected discovery:

“Increased views of blue space is significantly associated with lower levels of psychological distress,” according to Melissa Amber Pearson, co-author of the study. “However, we did not find that with green space.”

Nichols—a senior fellow at the Center for Blue Economy in Monterey, California, and research associate at the California Academy of Sciences—explained how blue space largely centers on removing excess stimuli from the brain.

“As you move from a loud distracting place—I call that a red mind place; there’s lots of research on stress from stimulation. You turn off your screens stand up and move—again, there’s lots of research about exercise being good for your brain. You have the waterfront and walk along the beach, removing even more distractions—as opposed to the city—and remove visual and auditory stimuli replaced with water sounds and blue space.”

Referencing the New Zealand study, Nichols finds the results intriguing but tries not to distinguish between blue and greenscape when encouraging people to get outdoors and away from distractions.

“I avoid competition between blue and green, mountains and ocean. For example, when people are looking forward to a weekend with friends, they often choose a crowded bar or restaurant with multiple TVs, overwhelming background music, an annoying waiter, and an overwhelming menu—that’s not a relaxing space. It’s overstimulating.” Nichols explains, “What blue mind offers are the components that lead to creativity: decompressing, novelty, and a mildly meditative state.”

This idea that the color blue advances creativity is supported by research published in the American Association for the Advancement of Science’s journal.

As for the other components of Nichols’ blue mind theory, Richard Shuster, PsyD and clinical psychologist said, “The color blue has been found by an overwhelming amount of people to be associated with feelings of calm and peace.”

Shuster further explains that “Staring at the ocean actually changes our brain waves’ frequency and puts us into a mild meditative state.”

According to Shuster, the sound of the tide flowing in and out has a powerful effect. “It kind of de-stimulates our brains.”

Orfeu Buxton, associate professor of biobehavioral health at Pennsylvania State University, offers a further explanation for the soothing effects of the ocean waves.

Nichols concurs with Shuster and Buxton that part of what makes the ocean so calming is the sound of the waves, similar to the sound people create when they engage in deep breathing in meditation or yoga.

“Breathing is so important in yoga, but if you are standing near the ocean, your breathing will move near the cadence of the ocean. The same thing will happen if you’re listening to music, or if you’re talking to someone.” Nichols called this process “entrainment with the rhythm of our environment.”

Nichols suggests that humans innately know what neuroscience shows: that water takes people to a more meditative space, a “deeper dive.” By example, he describes how often publications use water images as the lead photos and yet never mention water in the text.

“Also from a visual perspective, being by the water it meditates you,” he explained. “Many people struggle with meditation, but looking at the water helps you meditate. I tell people to go look at the ocean, a river, a fountain for 30 seconds; that’s meditation. That’s meditation for people who don’t like meditation. You will think differently and it will calm you.”

Science has proven the mental and physiological benefits of mindfulness, including reducing stress and becoming more resilient to it, improving memory, reasoning, empathy, and ability to focus.

Together, the sights and sounds of the water engage the parasympathetic nervous system, “responsible for slowing us down and allowing us to relax and feel more engaged,” according to Sally Nazari, PsyD, owner of Chrysalis Psychological Services.

As far as what types of water provide the greatest meditative effect, Nichols said, “There’s a continuum from the extreme blue mind to zero blue mind: starting with full access to a clean, healthy ocean, to a plug-in fountain from Costco at your office, at the other end. Then, there’s everything else in between.”

While he resists specifically ranking those water sources that fall somewhere in the middle, part of what makes the ocean special, according to Nichols, is the possibility of seeing wildlife.

“You have the moving water—which is visual and auditory and could also be found in some lakes—but also the novelty of the changing landscape with the chance of seeing a bird dive or even a whale breach.” Nichols said. “It’s the opposite extreme of a sterile blue room with white noise.”

Studies show the ocean air also benefits people’s mental health. The oxygen ions in misty air contain an extra electron. This negative ion produces an instant calming effect on the brain when people breathe it in, and also has an antidepressant quality. Shuster explained these oxygen atoms are located near waterfalls and the ocean.Research published in the Journal of Alternative Complementary Medicine shows negatively ionized air can relieve symptoms of seasonal affective disorder (SAD).

Some research suggests this effect extends to walking on the sand barefoot, known as grounding. According to this theory, the negative ions enter through the nerves and acupuncture points in the feet, similar to the way they enter the lungs through the air.

Shuster explained the net effect of grounding: “The physical sensation of putting your feet in warm sand causes people to relax.”

Placebo Effect of Peace at the Water’s Edge

As much as science shows spending time near water can positively impact people in numerous ways, there’s a definite placebo effect that also contributes to the effect.

“We’ve been conditioned to think of the beach as peaceful and relaxing,” Shuster said. “We expect when we go to the beach that we are going to relax.” Most forms of entertainment and marketing, from print and radio to television and film, use the beach to depict peaceful images.

Nichols said, “I call it the ‘blue-cebo effect’—like placebo, meaning the brain makes it on your own.” He emphasized the significance of the placebo effect, specifically with respect to blue space theory and explained: “It’s extremely important because the more you believe it, the better it will be for you in addition to the science. You can psych yourself up for something or psych yourself down.”

Pearson, assistant professor of health geography and a member of Michigan State University’s (MSU) Water Science Network, describes urban planning as “increasingly important.” As a result, she suggests “future research could investigate whether the findings hold true for large fresh bodies of water such as the Great Lakes.”

A 2016 Japanese study discussed additional concerns about environmental destruction and overdevelopment of coastal areas, despite findings that living near the ocean promotes calm and general well-being and that “engaging with nature heals the mind and body and promotes recovery from stress.”

As stress is known to cause all kinds of mental and physical conditions, largely through the release of cortisol, promoting a lifestyle that promotes peace and tranquility is worth further study.