Google’s latest creation, a bipedal robot named ATLAS, is turning heads in the defense community and leading to speculation about the future of robotics. 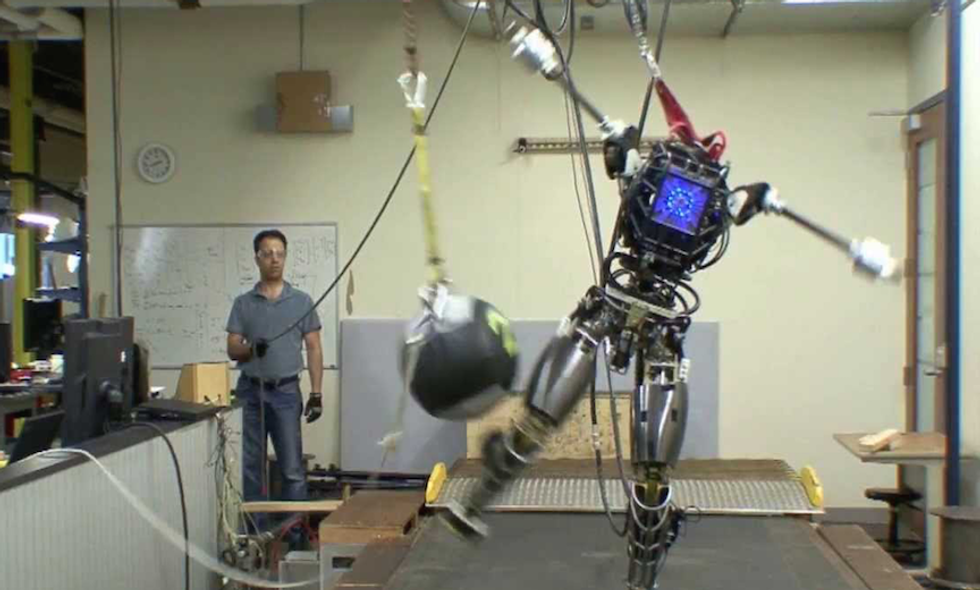 A new humanoid robot named ATLAS is incredibly adept at keeping its balance and getting back up when it’s knocked down. ATLAS is one of the most advanced bipedal robots ever built, causing more than a few defense analysts to speculate about the future of unmanned warfare.

“My guess is early on we’re going to see defense use, law enforcement use, hazardous waste use and some surgical and medical equipment use,” said Max Wolff, chief economist at Manhattan Venture Partners.

In a video released by creator Boston Dynamics, ATLAS is shown strolling over uneven terrain in the woods, picking up boxes and shifting its weight over its torso to stack them, and even springing to its feet after being pushed down by a researcher.

The robot’s ability to adjust its balance when it senses a change in the terrain is a hugely complicated problem for robotics engineers. For bipedal animals like humans, the brain is constantly making micro-adjustments based on sensory information. This type of information comes to ATLAS through the stereo and LIDAR sensors (which use laser light to measure the distance of surrounding obstacles) in its head.

In the outdoor portion of Boston Dynamics’ video, ATLAS is being given steering directions from a human controller, but is using the stereo-LIDAR combo to communicate information to the rest of its body so it can respond to the uneven terrain. Basically, even when ATLAS is being “driven,” the robot is still in control of its own balance and motion, allowing it to bounce back after an unintentional fall (or intentional push).

“When something sudden and fairly impactful happens to the robot, we call that an impulse, and

that’s very difficult for a system to respond to,” said Ken Goldberg, robotics professor at UC Berkeley. “It’s definitely kind of jaw dropping,” he said of ATLAS’ smooth movement and uncanny ability to stay on its feet.

The robot’s legs are the key to its new agility, and they’re hardly in their perfected form. This version of ATLAS is the latest in a long history of innovations from Marc Raibert, who founded the MIT Leg Lab and developed the concept of dynamic locomotion. Boston Dynamics began in 1992 as a spin-off from MIT, and in 2013 the company was bought by Google’s parent company, Alphabet.

The earlier version of ATLAS robot was much heavier and required a tether to connect it to a power source. This new model runs on batteries and has 3D-printed legs complete with integrated actuators and hydraulic lines. Those custom design elements make the robot lighter and help it adjust its movement based on information from the LIDAR sensors.

The integrated approach is being used in robotics labs around the world, including the Italian Institute of Technology, which has partnered with manufacturing company Moog to build 3D-printed hydraulic actuators for their robotic quadruped.

Despite speculation about the possible military purpose of robots like ATLAS – and fears that robot armies might eventually turn their guns on humanity – Raibert and Alphabet have offered no specifics on what ATLAS is for.

“Our long-term goal is to make robots that have mobility, dexterity, perception and intelligence comparable to human and animals, or perhaps exceeding them,” Raibert said. “This robot is a step along the way.”