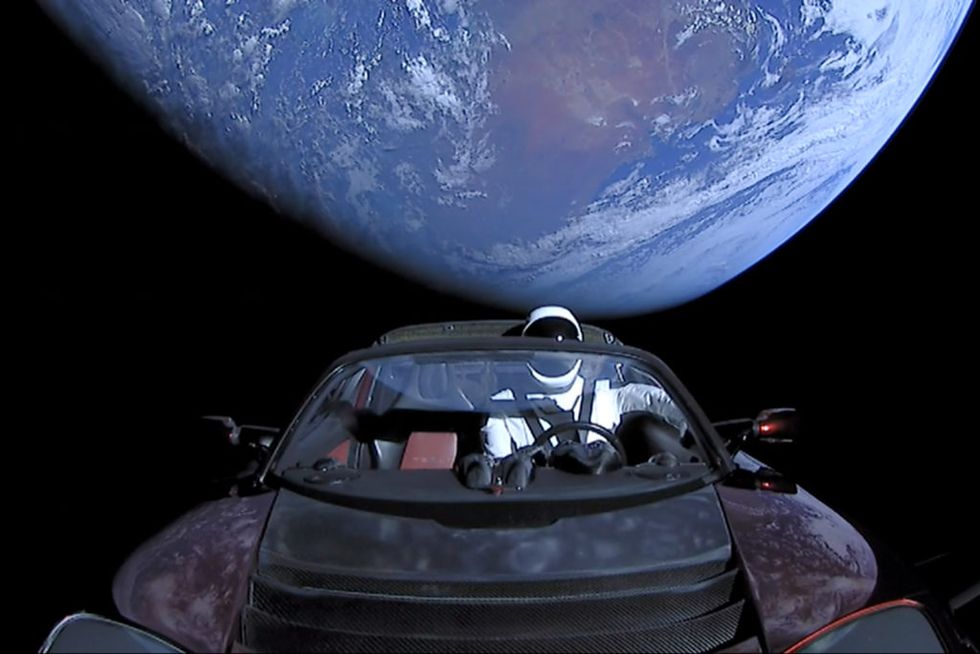 Picture it: February 2018, Florida. The largest commercial rocket in the world sits upright on launch pad 39A at Kennedy Space Center awaiting its first journey into space. The Falcon Heavy rocket, eventually intended to deliver large payloads into space, is built by SpaceX, one of many privately-owned empires built from the ground up by visionary and entrepreneur Elon Musk. But this mission is far simpler: launch the Falcon Heavy into Earth’s orbit to test its systems together. Of arguably more importance is the Falcon Heavy’s theoretical ability to propel space-bound humans well beyond the limits of the Earth’s atmosphere to previously unexplored destinations, beginning with Mars.

On this day, the Falcon Heavy payload isn’t part of a future space station, a highly-classified satellite for the government, or humans reaching far to “touch the face of God.” The payload is Elon Musk’s own first-generation electric Roadster, a groundbreaking all-electric car made by Musk’s car company, Tesla.

Upon review, the launch went off flawlessly. The Falcon Heavy’s 27 engines roared to life pushing the massive engineering marvel further away from the famous launch pad from which men were propelled to the moon during NASA’s Apollo missions effectively ending the Space Race. Once the Heavy completed the first stage of its ascent, the side boosters separated from the main stack allowing for engineers to remotely guide them back to earth for reuse on future SpaceX missions. The main Falcon stack continued to speed into space, eventually opening up to jettison the Tesla Roadster onto a continuous Mars-Earth crossing orbit for what scientists and mathematicians project could last tens of millions of years.

The most interesting part of this story is not the massive engines, the ability to land and reuse rockets, or even a car being put into space. In fact, launching a car into space isn’t as groundbreaking as it sounds. In the Apollo days, NASA sent cars to the moon with astronauts so they could further explore the surface at greater distances from the landing zone. What made this car special was not what it looked like, what the stereo was playing or the mannequin in the driver’s seat wearing a SpaceX uniform, but what was written on the car, as Musk revealed a few days later.

After much of the attention over his most recent achievement had died down, Musk posted a picture on Instagram with a caption “Printed on the circuit board of a car in deep space. “

The picture shows a green electric circuit board with the message “MADE ON EARTH BY HUMANS.”

At first glance, the message doesn’t seem particularly remarkable. But nearly everything we consume proudly announces the political or geographic territory where the product was made, such as “MADE IN CHINA,” “MADE IN MEXICO,” and “MADE IN AMERICA.” It’s a message so fundamental to a country’s economy that the current President of the United States dedicated his entire campaign to the idea of reinvigorating American manufacturing and making “MADE IN AMERICA” a trademark to aspire to. But why does a red Tesla Roadster being launched into space need a “MADE IN” message at all?

Upon further examination, there are multiple parts to this message. The first part is “MADE ON EARTH.” This isn’t a message hoping for a return in orders of Tesla Space Cars but rather a “message in a bottle” to the future, possibly even after humans are extinct. The message is testament to a culture founded on exploration, which stems from our innate curiosity and the insatiable desire to be seen and recognized.

This brings us to the second part of the message: “BY HUMANS.” This is possibly the most important message to our future selves. It’s a unification of the entire human race in two words: that we as a collective race and inhabitants of a planet made something great. In Earth’s history, we’ve seen many different cultures have been responsible for  wonders; The Egyptians made the Pyramids, the Greeks made the Statue of Zeus, the Chinese made a Great Wall and the Romans made the Colosseum. Now a collective work of the entire human race manifests in an electric car as a type of space time capsule. Musk’s Tesla Roadster was not just a flight of fancy, or a payload for a science experiment; it’s a new marvel for a future world with an interplanetary ID; and the story doesn’t stop there.

A few weeks after the Falcon Heavy launched into space from Cape Canaveral, a group of scientists from the Centre for Planetary Sciences released an eye-opening report reminding wide-eyed space nerds of Sir Isaac Newton’s law of physics that “what goes up, must come down.” The report, authored by Hanno Rein, Assistant Professor of Physics at University of Toronto Scarborough, focuses on the probability over time that the Roadster won’t be in space forever.

“The orbital evolution is initially dominated by close encounters with the Earth,” the report states, continuing, “The first close encounter with the Earth will occur in 2091… [we estimate] the probability of a collision with Earth and Venus over the next one million years to be 6% and 2.5% respectively. We estimate the dynamical lifetime of the Tesla to be a few tens of millions of years.”

Ultimately, only time will determine the Roadster’s final destination of the Tesla Roadster (AKA: Starman, 2018-017A). Whether it burns up on reentry to Earth’s atmosphere in 2091, gets intercepted by other intelligent life or continues on its trajectory for millions of years remains to be seen, but the message of human unity it bears has now been written in the stars; allowing Elon Musk to take the lead in the modern space race, with his little red Roadster and a message, “MADE ON EARTH BY HUMANS.”