Young dolphins can recognize themselves in a mirror by the age of 7 months — a full five months before human babies. 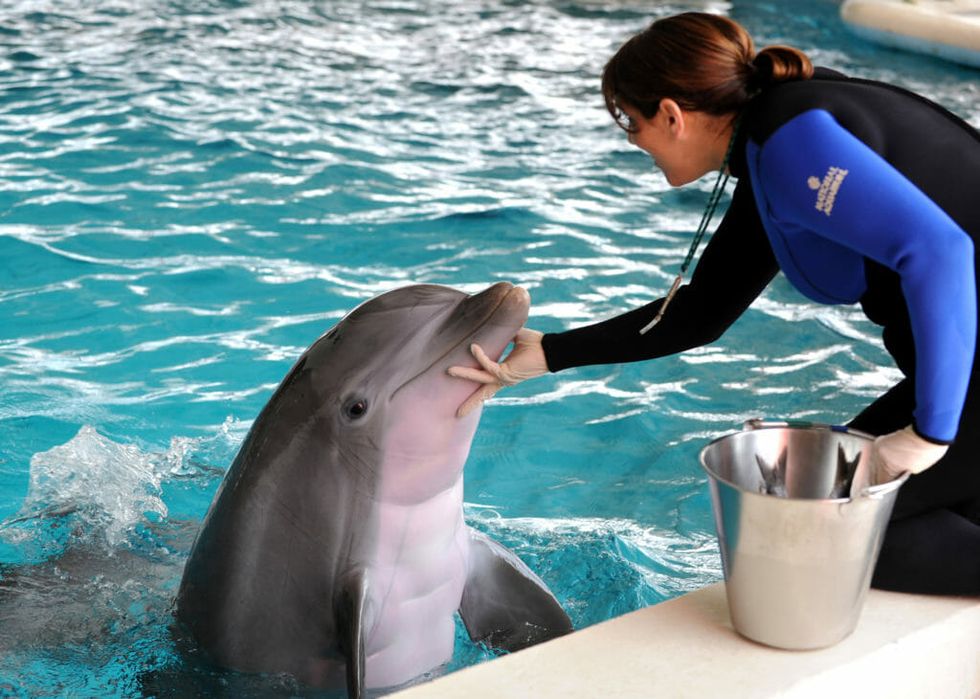 At the National Aquarium in Baltimore, Maryland, Allison Ginsburg, manager of dolphin training, feeds Spirit, one of the mothers who gave birth to a calf this spring, June 1, 2011. (Algerina Perna/Baltimore Sun/MCT via Getty Images)

The first time children can recognize themselves in a mirror is a significant developmental milestone. However, a new study has found that young bottlenose dolphins reach this stage sooner than human infants.

Human babies typically develop self-awareness, or the ability to recognize that the reflection in a mirror is themselves and not just another baby, around 12–18 months. In contrast, according to a study published this month in PLOS One, bottlenose dolphins (Tursiops truncatus) gain this awareness around seven months.

In the study, scientists at the National Aquarium in Baltimore watched two young bottlenose dolphins — a male and a female — over the course of three years, specifically examining how they interacted with their images in a mirror.

The female dolphin, named Bayley, showed social behaviors toward the mirror, such as “close-eye viewing, bubble production and body tilting,” beginning at seven months of age. The male, named Foster, was 14.5 months old when first introduced to the mirror, but he immediately exhibited the same behaviors as Bayley.

“Both dolphins produced a rich suite of self-directed behaviors at the mirror,” the study authors wrote. “Many of these were combinations of multiple behaviors, such as open mouth viewing and vertical head movements all while inverted. On several occasions, they also produced instances of what appeared to be ‘apparent social behavior,’ and other creative bubble production and play behaviors.”

One of the study authors, Diana Reiss of City University of New York’s Hunter College, had previously discovered dolphins can recognize themselves in a mirror (the results were published in The Dolphin the Mirror in 2011), but this was the first developmental analysis on very young dolphins.

The results “add new layers to our understanding of factors that may contribute to the capacity for [mirror self-recognition] across species and the evolution of intelligence in the animal world,” Reiss said in a press release from Hunter College.

Dolphins have long been believed to possess intelligence and problem-solving abilities on par with larger mammals like chimpanzees (which typically don’t recognize themselves in the mirror until two years old), even if recent research has suggested dolphin intelligence is overrated.

“…We do understand dolphins quite well because there's been a lot of research on them, but maybe that has elevated them above other species,” science writer Caroline Williams told NPR in an article titled “Dolphins: Adorable, Playful, Not as Smart as You Might Think.” “It may be fairly, but it may turn out that they are on par with other species as well."

Justin Gregg, the author of a 2014 book, Are Dolphins Really Smart? The Mammal Behind the Myth, goes on to argue that much of the evidence of dolphins’ intelligence is inconclusive. “ I hope that people will get rid of these ideas of there being that continuum of intelligence with dolphins at the top, and just appreciate all the different species for what it is that they can do,” Gregg toldThe Boston Globe.

Still, the authors of the mirror study indicate that the animals’ early self-awareness is commensurate with their brain size and demonstrated problem-solving abilities.

“The early emergence of this level of self-awareness coincides with the dolphins’ precocious development of social awareness and advanced sensorimotor skills,” said study co-author Rachel Morrison, of the University of North Carolina at Pembroke.