Sarah Sanders Was Asked If Donald Trump Would Rule Out Pardoning Himself, and Now She Has a New Talking Point

The master of the non-answer answer. 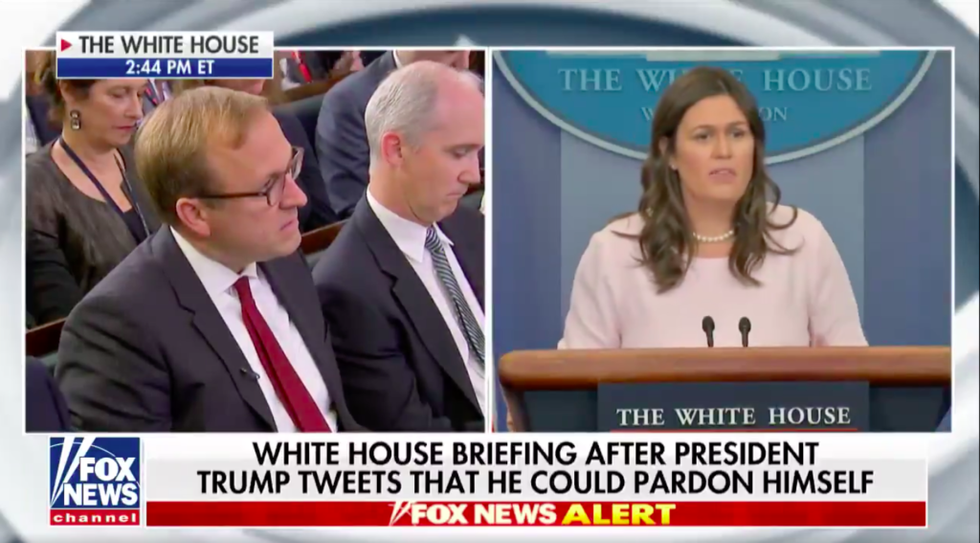 Earlier today, President Donald Trump asserted that he has the right to pardon himself and once again stressed his belief that Special Counsel Robert Mueller's investigation into Russian election interference is "unconstitutional."

"As has been stated by numerous legal scholars, I have the absolute right to PARDON myself, but why would I do that when I have done nothing wrong? In the meantime, the never ending Witch Hunt, led by 13 very Angry and Conflicted Democrats (& others) continues into the mid-terms!" the President wrote on Twitter.

"The appointment of the Special Counsel is totally UNCONSTITUTIONAL!" the president wrote not too long afterward. "Despite that, we play the game because I, unlike the Democrats, have done nothing wrong!"

An exchange between Sanders and Jonathan Karl, the Chief White House Correspondent for ABC News, has garnered significant attention.

"A short time ago, the president said that 'I have the absolute right to PARDON myself.' Why does he think that and does he also agree with Rudy Giuliani, his lawyer, that a pardon for himself would be unthinkable and would lead to immediate impeachment?" Karl asked.

"Thankfully the president hasn't done anything wrong and wouldn't have any need for a pardon," Sanders replied.

"But does he absolutely rule out doing that?" Karl pressed. "Does he rule out ever issuing a pardon for himself?"

Sanders was curt: "Once again, thankfully the president hasn't done anything wrong and wouldn't need one."

“Does the president believe that he is above the law?” Alexander asked.

“Certainly not,” Sanders said. “The president hasn’t done anything wrong.”

Alexander chose to clarify: “I guess the question is: Does the president believe the Framers envisioned as a system where the president could pardon himself — where the could be above the law?”

“Certainly the Constitution very clearly lays out the law,” Sanders said, though she did not elaborate nor did she point to a specific article within the Constitution to support her claim. “Once again the president hasn’t done anything wrong. And we feel comfortable in that front.”

But Alexander was dissatisfied with that answer, and he returned to his first question: “Simply put: Does the president believe he is above the law?”

“Certainly, no one is above the law,” Sanders responded.

Alexander pressed on, but Sanders had enough; the exchange soon devolved, with Sanders speaking over him and moving on to the next question without answering Alexander's question.

WATCH: @PeterAlexander challenges the White House on whether President Trump believes he is above the law. https://t.co/0i2SfMOJJ6
— MSNBC (@MSNBC) 1528138667.0

Sanders' defense of the president comes on the heels of an interview his attorney, Rudy Giuliani gave The Huffington Post, in which he claimed that Trump hypothetically could have shot former FBI director James Comey to end the Russia investigation and not face prosecution for it while in office.

“He has no intention of pardoning himself,” said Giuliani. But it is a “really interesting constitutional argument: ‘Can the president pardon himself?'”

Giuliani's comments reflect the beliefs of other members of the president's legal team. Over the weekend, The New York Times published a confidential 20-page memo sent by President Trump’s lawyers to the special counsel, Robert Mueller, which concludes that it is impossible for the president to illegally obstruct any aspect of the investigation into Russia’s election interference. The president’s lawyers argue that, as president, Trump has the authority to shut down the investigation or pardon himself:

It remains our position that the President’s actions here, by virtue of his position as the chief law enforcement officer, could neither constitutionally nor legally constitute obstruction because that would amount to him obstructing himself, and that he could if he wished, terminate the inquiry, or even exercise his power to pardon if he so desired.

The president’s lawyers say that Trump could not have intentionally impeded the F.B.I.’s investigation into his former national security adviser Michael Flynn’s Russian ties because he did not know Flynn was under investigation when he spoke to Comey, whom he fired last May.

“There could not possibly have been intent to obstruct an ‘investigation’ that had been neither confirmed nor denied to White House counsel,” they wrote, adding that FBI investigations do not qualify as the sort of “proceeding” an obstruction-of-justice statute covers.

“Of course, the president of the United States is not above the law, but just as obvious and equally as true is the fact that the president should not be subjected to strained readings and forced applications of clearly irrelevant statutes,” they note.

The president’s legal team has continued to argue that Trump should not be compelled to testify before Robert Mueller. Earlier news reports indicated that Trump’s attorneys are afraid the president, who has a long history of lying and contradicting himself, would perjure himself if he were to sit for an interview with the special counsel.