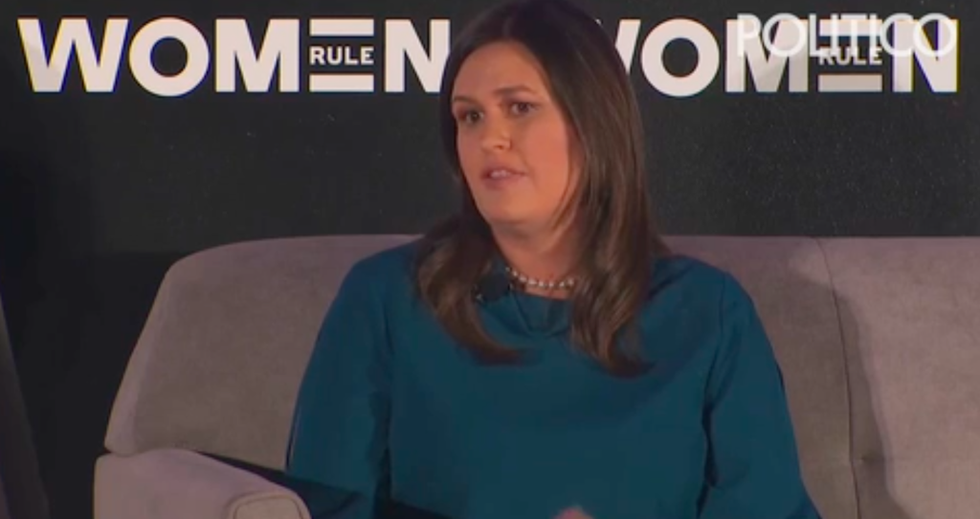 The conversation took place at Politico's Women Rule conference, where Sanders had sat down for a talk. The interviewer, Eliana Johnson, cited examples of Trump's ire toward female journalists and asked Sanders if she thought the President's words were appropriate.

"Look, the President's had an equal number of contentious conversations with your male colleagues. The President is certainly not singling out women and frankly I think it is actually a detriment when we do that...Women want to be treated equally and we have a President that certainly does that."

But Johnson wasn't letting Sanders off that easy.

After Sanders said that Trump treated male journalists the same way, the interviewer expanded her question to ask if Trump's remarks toward journalists as a whole were appropriate. At first, Sanders attempted to deflect blame onto the press itself, at which point the interview promptly redirected Sanders to speak to the White House's behavior.

"I think that the President is somebody who is a fighter. This is something—when he gets hit, he always hits back, and I think the people of this country knew exactly who Donald Trump was and they came out and 63 million Americans voted for him."

Watch Sanders spin the interactions in the video below:

As is often the case with Sanders's defense of the President, a pattern of past events contradicts her.

Earlier this year, Donald Trump dismissed CBS News journalist Weijia Jiang, ordering her to be quiet and publicly calling her "obnoxious" for asking the President a question.

The President decried CNN's Abby Phillip for asking what he said was a "stupid question."

In addition, the President has also frequently referred to women as "dogs" and other animals, as he did his former political aide Omarosa Manigault Newman after she went public regarding the conditions of her firing.

Eric Trump has some gall calling ANY man disrespectful towards women when his father has cheated on every wife he h… https://t.co/z0LVF8TktD
— TrumpIsALiar (@TrumpIsALiar) 1543930027.0

Sanders's interview shows that the Press Secretary is ready to spin the President's behavior at a moment's notice. How exhausting.