Sarah Sanders Just Went on Fox News to Try to Fearmonger About Terrorists Coming Over the Border, and Chris Wallace Used Her Own Statistic Against Her 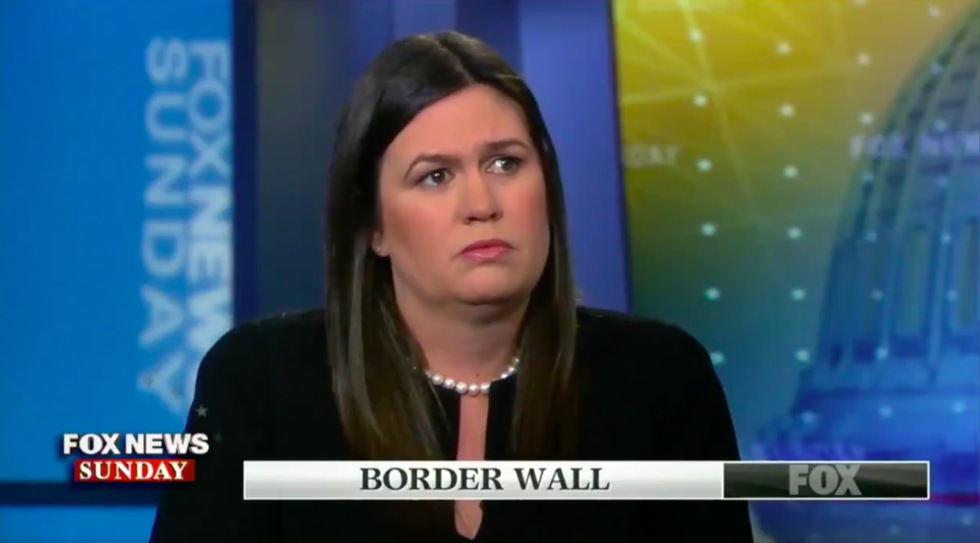 As the Trump shutdown wears on, it's becoming clear that even Fox News—long a safe place for Conservatives sharing talking points unburdened by factual information—may not let the current administration off so easy.

In an interview with Fox's Chris Wallace, White House Press Secretary Sarah Huckabee Sanders defended President Donald Trump's insistence on the allocation of $5 billion dollars to fund a wall at the southern border.

As has become typical for the administration, Sanders reverted to misleading statistics to drum up fear of immigrants and asylum seekers, but in a shocking twist, Fox News and Chris Wallace weren't having it.

Sanders implied that 4,000 undocumented immigrants were coming through the southern border on foot, but Wallace quickly corrected her:

"I know the statistic, I didn't know if you were going to use it, but I studied up on this. Do you know what those 4000 people come when they are captured? Airports. The State Department says there hasn't been any terrorists found coming across the southern border."

Sanders was taken off guard, but continued to assert that the problem was "by land, by air, and by sea."

However, Twitter was glad that facts found their way to Fox News.

@mattshuham @FoxNewsSunday @PressSec I cannot believe I am saying this but this is how you do a interview on the Tr… https://t.co/U3iGJXurCp
— Jane Barnes (@Jane Barnes) 1546815325.0

@mattshuham @FoxNewsSunday @PressSec In short there is no credible threats coming across the southern border. If th… https://t.co/n9anlFgqTM
— Dowdy Jackson (@Dowdy Jackson) 1546838706.0

@mattshuham @melvin3232 @FoxNewsSunday @PressSec More of this please. Seeing her gulp under questioning was worth it.
— Bexy Haack (@Bexy Haack) 1546821063.0

It was a noted change of pace for the president's favorite network.

Sanders, who has long repeated the President's lies on immigration and other issues, appeared to think that her misleading statistic would go unquestioned. When it was, the White House Press Secretary was clearly taken aback and viewers loved it.

It seems as though Sanders has lost another talking point to facts and contexts.