Sarah Sanders Went on Fox News to Complain About How Democrats Are Treating Brett Kavanaugh, and People Can't Even With Her Hypocrisy 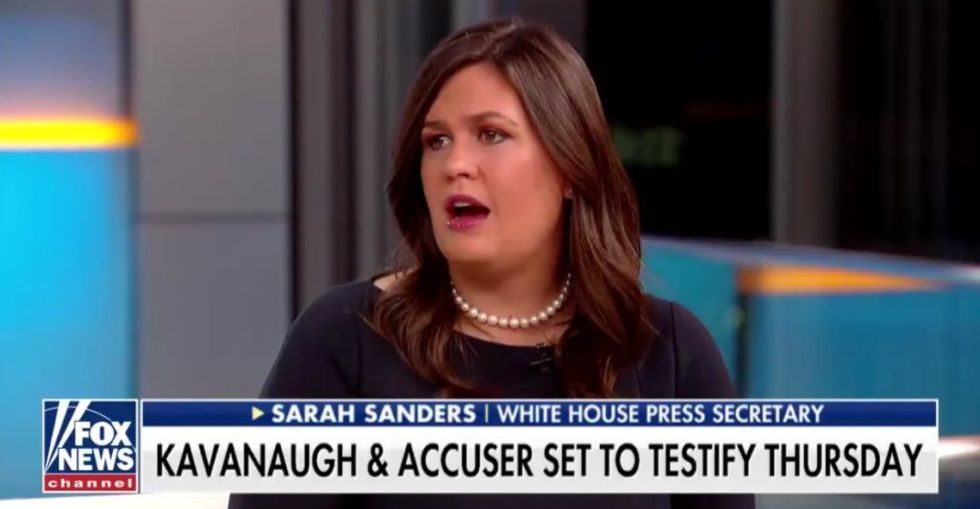 On Tuesday, while most of the world rewatched President Donald Trump's performance at the United Nations, White House Press Secretary Sarah Sanders visited the couch at Fox News' Fox & Friends with a message for Senate Majority Leader Mitch McConnell about the proper process for Supreme Court nominees.

"The president wants this process to come to a vote because that’s what’s supposed to happen. In every single one of these instances where someone is nominated, they go before, they have a hearing, and then the senators vote on it."

Only Sanders' message arrived over two years too late.

But Republican Senate Majority Leader Mitch McConnell of Kentucky—together with Republican Chairman Senator Chuck Grassley of Iowa—blocked any Senate Judiciary Committee hearings from taking place and the full Senate from voting on the confirmation of Garland for the vacant SCOTUS position. McConnell cited it being an election year as the reason.

However his argument ignored past history. In November 1987, President Ronald Reagan nominated Anthony Kennedy to the Supreme Court. The Democratic controlled Senate held hearings and approved Reagan's choice in February 1988, during an election year.

Statistics show one-third of all Presidents nominated a SCOTUS Justice during election years. Six Presidents defeated in their reelection bids and awaiting the end of their terms even nominated justices who were approved. Never before did such a blockage of an appointment occur.

Of course, Sanders did not appear of Fox News to admonish McConnell and Grassley for their false claims and delaying tactics that cost Obama his last SCOTUS pick and left the Supreme Court short a justice for 421 days. Sanders went to admonish Democrats for not immediately confirming President Trump's latest SCOTUS pick, Brett Kavanaugh.

The apparent hypocrisy proved too much for people who blasted Sanders on social media.

People knew exactly why Sanders went to Fox & Friends. On any other network, and even on some other Fox News programs, the Trump's Press Secretary would face a follow-up question based on her false claim.

@FoxNews @PressSec @foxandfriends This is why it doesn't matter when anyone from this administration is interviewed… https://t.co/LZ2KYbxeC1
— Lauren Sheftell (@Lauren Sheftell) 1537884227.0

@FoxNews @PressSec @foxandfriends Ummm ... sorta walked into that one. The Senate certainly had the right to not co… https://t.co/5WFmNOCITi
— Stevan Porter (@Stevan Porter) 1537877824.0

Others pointed to good reasons for a careful review of a person being appointed to a lifetime position capable of impacting the lives of United States residents for generations to come.

@FoxNews @PressSec @foxandfriends How many nominees lie under oath and are then accused of sexual assault? Why are… https://t.co/Fs7U6CxZ8I
— Lisa Smyth (@Lisa Smyth) 1537878341.0

@FoxNews @PressSec @foxandfriends Really? So, what you are saying is denying a SCOTUS nominee and a President a hea… https://t.co/X9lcXE26MP
— Barry Walters (@Barry Walters) 1537878215.0

While some questioned how Sanders could make statements she knows are false.

@karenlytle711 @FoxNews @PressSec @foxandfriends The really sad fact here is that it was most likely not an origina… https://t.co/SWHOZ1jmFC
— Brad Morrison (@Brad Morrison) 1537946855.0

Kavanaugh's entire nomination and hearing process remains mired in controversy over the unorthodox way it has been handled by the Republican led Senate Judiciary Committee. Less than 10 percent of Kavanaugh's records were made available for review contrasting with the over 90 percent for other nominees.

This is also an election year, yet McConnell and Grassley set a timetable to push through Kavanaugh's appointment prior to elections.