Rudy Giuliani Just Went Back on Fox News and May Have Made Things Worse for Donald Trump...Again 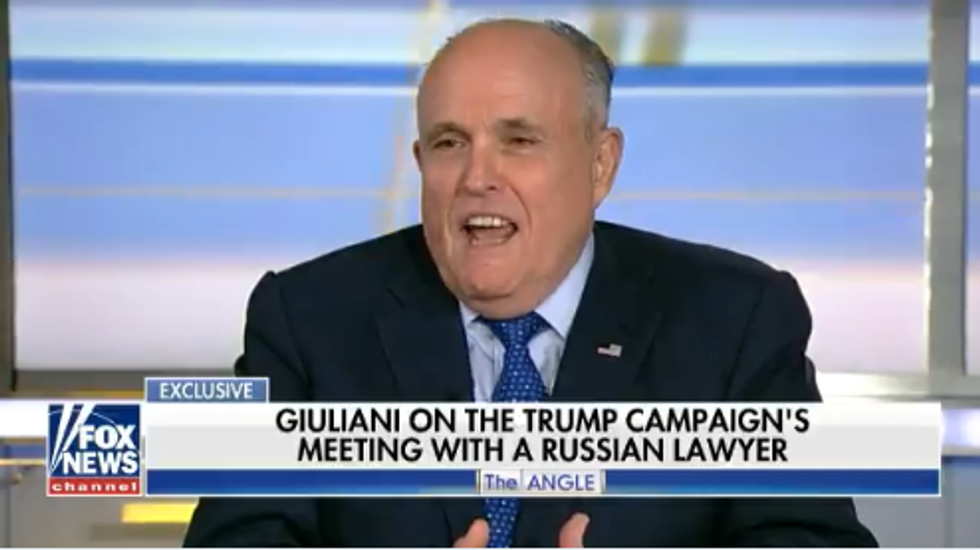 Rudy Giuliani offered a new defense of the infamous Trump Tower meeting in 2016, telling Fox News host Laura Ingraham that there is “nothing illegal” about conducting opposition research on political opponents—even if it came from Russia.

GIULIANI on the Russia investigation: “If there was collusion with the Russians, they [the Trump campaign] would’v… https://t.co/OMgTMTP5RR
— JM Rieger (@JM Rieger) 1526525008.0

They “never used it … they rejected it,” he said. “If there was collusion with the Russians, they would’ve used it,” Giuliani added, hypothetically. What Giuliani appears to be suggesting is that although the intent to collude was there, the sought-after information was not, and therefore, there's no problem.

Giuliani's tactic appears to be to muddy the waters through a public relations campaign as Special Counsel Robert Mueller deepens his probe into Russian election meddling and a web of financial crimes involving campaign officials and Trump associates. But will it prove helpful in Trump's defense?

Giuliani with a potential unforced error on Fox News. Says "if there was collusion with the Russians, they would ha… https://t.co/pWoT1xHkNO
— Sam Stein (@Sam Stein) 1526524017.0

Giuliani admitted that Donald Trump Jr., Jared Kushner, and Paul Manafort met with Russian agents at Trump Tower after being promised dirt on Democrat Hillary Clinton. But the Russians immediately changed the tenor of the meeting to sanctions, at which point the Trump party walked out, Giuliani claimed. No information was shared about Clinton, he said, and therefore, there was no collusion.

On Wednesday night, Giuliani rationalized the meeting, which was attended by high ranking Trump campaign surrogates and Russian operatives, by saying, "when I ran against [the Democrats], they were looking for dirt on me every day."

That’s what you do, maybe you shouldn’t, but you do. Nothing illegal about that...Even if it comes from a Russian or a German or an American, doesn’t matter.

The former New York City Mayor is calling for an end to the Russia investigation, which is now in its second year. Mueller "has nothing" on Trump, Giuliani insisted.

“We’re trying to get Mueller to end this,” Giuliani said. “This is not good for the American people."

@RiegerReport And they did. For example, Don Jr released the Clinton emails scandal right after the meeting with Russians...
— Ismael Prata (@Ismael Prata) 1526583493.0