Ted Cruz Apparently Really Wanted to Get on the Guest List to a Nine Inch Nails Show, and Trent Reznor Had a Short and Sweet Reply 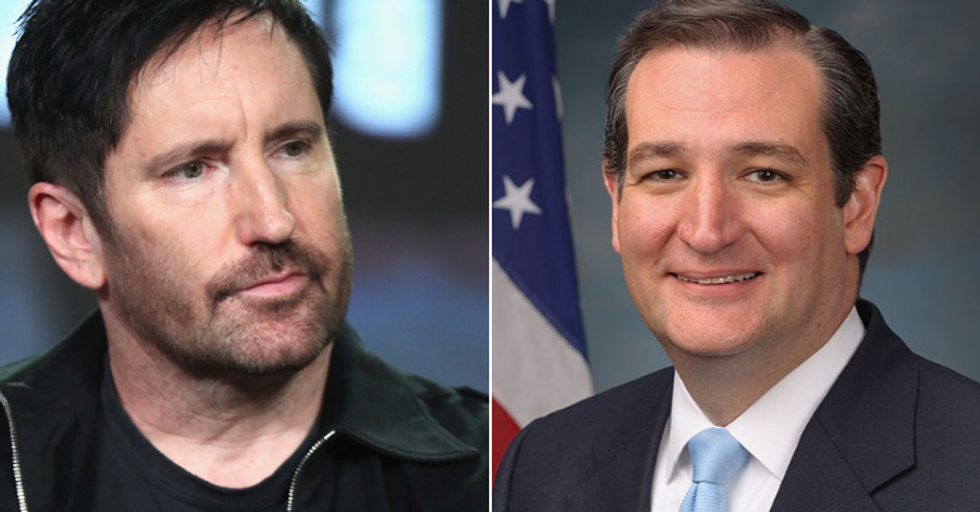 During the 2018 midterms race for the junior Senator's seat in Texas, GOP candidate Ted Cruz suffered a bit of an image problem among voters. In comparison to his Democratic opponent, Cruz lacked a "cool factor."

While image issues did not stop Cruz from retaining his Senate seat in deep red Texas, Cruz won by just 2.6%, with 50.1% to Beto O'Rourke's 48.3%. Third party Libertarian candidate Neal Dikeman garnered 0.8% in a state that Republican Donald Trump carried by almost 9%.

And outside of Texas, Cruz's popularity is negligible as evidenced by a request by Cruz for special access to a recent concert in Irving, Texas.

According to Nine Inch Nails frontman Trent Reznor, Cruz asked to be added to the guest list. But Reznor had a colorful response for the Senator. The rock star relayed the story to the crowd and an attendee shared it on Reddit.

Reznor asked for the house lights to be raised so he could check for people “who voted” for Cruz in the 2018 midterms. Reznor said:

"Who voted for Ted Cruz? See the lights aren’t on, I can’t see. Is there any way to turn the lights on? I’d like to see. Raise your hand, you guys, nothing to be ashamed of, just checking."

"He might be here tonight, he was bugging to get on the guest list, and I told him to fuck off,"

Reznor claimed VIP access had been granted to Cruz in the past. He stated:

"We put [Cruz] on a few years ago, he drank all the beer, and was just a pain in the ass to be around."

Plenty of people sounded off on Reznor's story.

Most people applauded the choice by Reznor.

@thehill "Reznor claimed the group placed Cruz on their guest list several years ago, but alleged that “he drank al… https://t.co/FYJ0pFpNN4
— Živilee (@Živilee) 1543447162.0

@ScottWamplerBMD It’s funny. No one in congress seems to like him, either. You’d think he’d have figured out the co… https://t.co/AZCB3WhXI0
— Jessica Dickens (@Jessica Dickens) 1543468540.0

While some tried to figure out which songs most appealed to Cruz. And why.

While a few called for civility to return between "both parties," as if Trent Reznor is now an official spokesman or elected official instead of a private citizen with an opinion.

The Texas GOP Senator has yet to comment on Reznor's claims or say whether he did attend the concert as a paying customer.