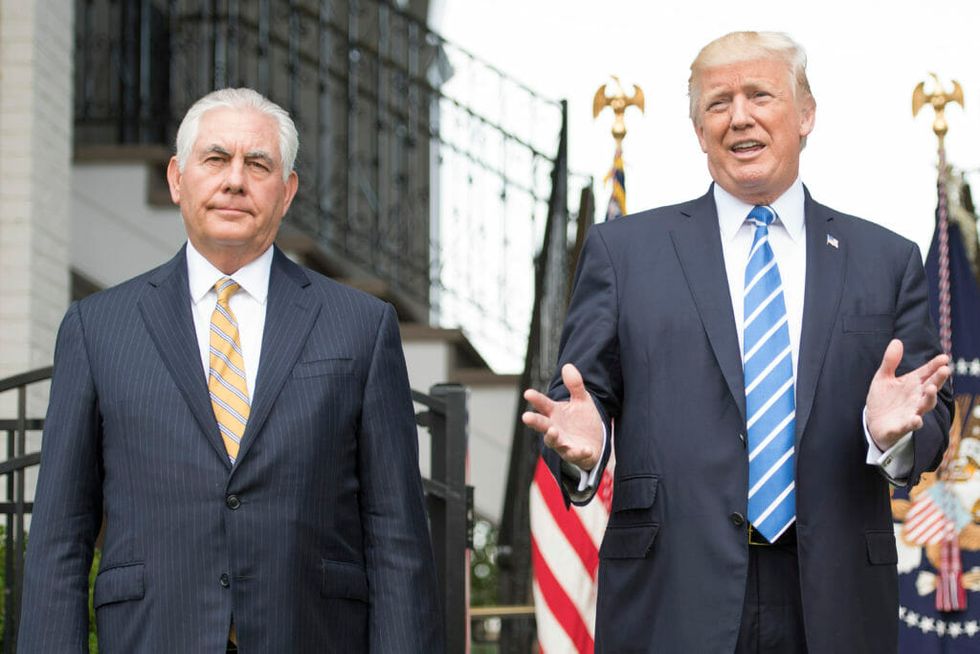 US President Donald Trump (R) speaks to the press with US Secretary of State Rex Tillerson (L) on August 11, 2017, at Trump National Golf Club in Bedminster, New Jersey. Trump said Friday that he was considering options involving the US military as a response to the escalating political crisis in Venezuela. / AFP PHOTO / JIM WATSON (Photo credit should read JIM WATSON/AFP/Getty Images)

NBC is reporting that on July 20, Donald Trump held a meeting with his foreign policy advisors during which he was briefed on the drawdown of nuclear weapons around the globe. After seeing a slide that demonstrated that the U.S. nuclear arsenal had declined from 32,000 warheads at its peak in the 1960s to just 4,000 today, Trump declared his interest in ramping the program back up, which would amount to increasing our nuclear stockpile by nearly 10 times current levels.

It was after this meeting broke up, administration officials report, that Secretary of State Rex Tillerson called the President "a moron."

Trump's advisors had to explain to him why ramping up our nuclear capabilities was not an option and why we're in a much stronger position today than we were then. Not only would it break with decades of convention but it would also violate numerous international treaties.

This news comes amid reports that Trump officials have discussed what to do in the event that Trump does insist on launching a nuclear attack.

Officials insist there are no plans to increase our nuclear arsenal at this time.